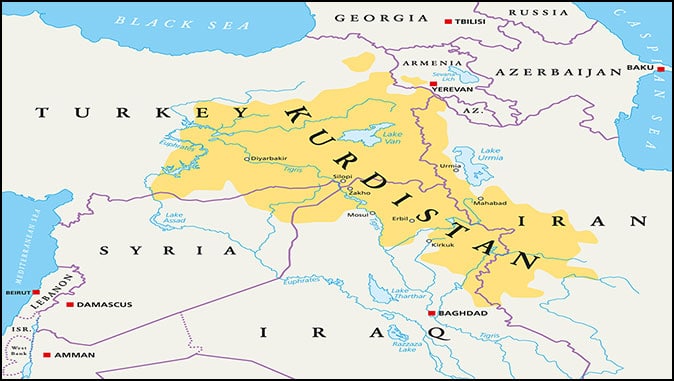 Since the Taliban’s violent takeover of Afghanistan on August 15, Turkey has increased its expansionist military activities in the Middle East in a way that is significantly impacting the lives of minorities.

Turkey appears to be maneuvering to expand an Islamic state in Syria and Iraq.

Turkey has so far been using its fight against the PKK (Kurdistan Workers’ Party) as an excuse to justify its military aggression, destruction and casualties of persecuted minorities. Among those communities affected by Turkish military actions in Iraq and Syria are Yazidis, Assyrians and Kurds — communities previously targeted by ISIS and al-Qaeda.

On August 17, in Iraq, the Turkish military carried out an airstrike on a hospital in Sinjar Province, where the Yazidi minority had already been victim of a genocide in 2014 at the hands of ISIS.

The raid, consisting of three drone strikes, “totally destroyed” the makeshift hospital in the village of Sekaina. A doctor in Sinjar said that at least three people had been killed and five others wounded. A senior Iraqi army officer told AFP that the raid had been carried out by Turkey’s military. Another Turkish air strike on August 16 targeted and killed a senior Yazidi leader, Hassan Saeed.

Assyrian Christians, another persecuted indigenous minority in Iraq, are also suffering from Turkish airstrikes. In a 2021 report , “Caught in the Crossfire: Assyrians and the Turkey-PKK Conflict in Iraq,” by the Assyrian Policy Institute, reported:

“Turkish strikes in northern Iraq have caused irreparable and costly damage to civilian properties and agricultural lands… The destruction to private property and farmland caused by Turkish airstrikes effectively robs Assyrian farmers of their livelihoods and immediately threatens their ability to stay in their homes and villages.”

Also in August, the Turkish military conducted bombardments in Al-Hasakah Province; once again Turkey used the PKK to justify targeting civilians and US allies. One child was killed and five other civilians were wounded in the bombardment, according to the Syrian Observatory for Human Rights. The next day, 13 rockets hit the Afrin city center, killing three people and wounding four others. In another airstrike that killed four members of the SDF, the Turkish military targeted Tel Tamir’s Military Council base. Sosin Birhat, one of the SDF casualties, had previously joined meetings with top US military officials and diplomats, the pro-government Turkish newspaper Sabah noted.

Amy Austin Holmes, a public policy fellow at the Woodrow Wilson Center for Scholars, has challenged Turkey’s version of events:

“First, Turkey justified its 2018 and 2019 interventions in Syria by claiming the presence of the SDF/YPG along its southern border constituted a grave threat. But my analysis of data from the Armed Conflict Location and Event Data Project indicates the opposite is closer to the truth. Between January 2017 and August 2020, Turkey and Turkish-backed forces carried out 3,319 attacks against the SDF/YPG or civilians. By contrast, the SDF/YPG carried out 22 cross-border attacks into Turkey. Turkish officials claim their attacks against the SDF/YPG were tit-for-tat. But that is mathematically impossible.

“Second, after signing the U.S.-brokered ceasefire agreement in Syria in October 2019, Turkey promised to safeguard civilians and religious and ethnic minorities. However, Yazidis, Christians and Kurds have fled in droves from the Turkish-occupied areas of Syria. Data I analyzed showed that Turkey and Turkish-backed militias violated the U.S. ceasefire agreement over 800 times in the first year after it was signed. The Assyrian Christian region of Tel Tamer was targeted every single month.

“Finally, I led a research project that analyzed the impact of Turkish airstrikes on Yazidis in Sinjar. Data-mining from five different sources, we found that Turkey had hit Sinjar with strikes every single year for the past five years. Turkish military activity is a major impediment to recovery. In the month of July alone, 472 Yazidis who tried to return to Sinjar to rebuild their lives ended up relocating back to camps for internally displaced people.

“As these examples illustrate, Turkish claims about “anti-PKK” operations need to be fact-checked.”

The same Turkish government that claims to counter “terrorism” through its fight against the Kurdish PKK has supported ISIS in the region for years. According to Dr. Mordechai Kedar:

“2014 marked the year when ISIS became a very real threat to the Middle East. Within one year, the group managed to take over a third of Iraq and half of Syria, with 200,000 fighters under its control….

“The ability of ISIS to become a functioning state so quickly is largely due to its relationship with President Erdoğan in Turkey.

“ISIS has had strong connections to Turkey over the years, whether through its oil industry or through its willingness to shield wanted members of the Muslim Brotherhood. This ‘neighborly’ relationship was essential to ISIS’s success, and it continues to be reflected in Turkish decision making.

“Turkey has been ruled by Erdoğan since 2002. He is a vocal supporter of the Muslim Brotherhood, a movement that seeks to establish a worldwide Islamic caliphate that applies Islamic sharia law.

“Not only did President Erdoğan never launch any counterterror operations to disrupt ISIS’s networks or recruitment activities, but he provided it with assistance.”

“Countries previously part of Turkey’s former Ottoman Empire, and countries with a significant Muslim population, are specifically targeted… Turkey has leveraged those religious freedom issues of neighboring countries for Turkey’s own benefit, at the expense of the local population.

“In short, Turkey’s military expansionism has had the impact of exploiting people, exporting persecution, and enabling the perpetrators to commit even more egregious actions. If this is how Turkey treats vulnerable communities outside of its own borders, then how much more so within.”

The Turkish government — a member of NATO — clearly seems to feel itself on a jihadist roll.

Bowing to Hezbollah The anti-Hezbollah coalition wins Lebanon’s elections. But how much does it change?…