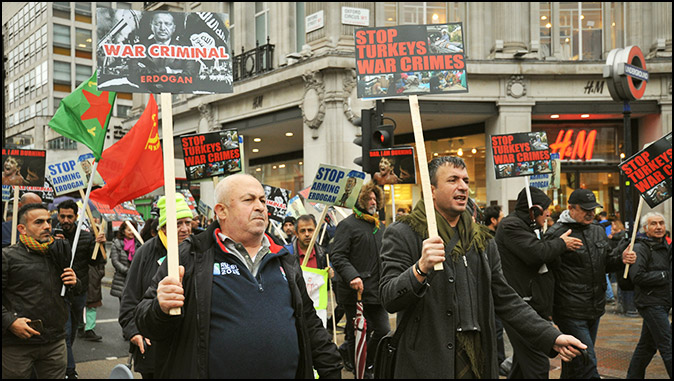 Turkey Using Chemical Weapons Against the Kurds?
By Uzay Bulut

The Kurdish Firat News Agency (ANF) released on October 18 a video showing, according to the ANF, two PKK (Kurdistan Workers’ Party) members suffering from exposure to prohibited chemical weapons being used by the Turkish military. The two individuals were allegedly caught in a Turkish chemical weapons attack in the Kurdistan Region of Iraq; they eventually died. “It is seen that the chemical weapon paralyzes the nervous and respiratory systems and causes memory loss,” the ANF reported.

The People’s Defence Forces (HPG), the military wing of the PKK, claimed that 17 PKK members were killed by Turkey’s chemical weapons.

Citing a PKK statement, the ANF report stated that the Turkish Army has used banned bombs and chemical weapons at least 2,476 times within the last six months of its military operation against the Kurdish group.

The PKK, which was established in 1978 for the purpose of seeking Kurdish independence, has long accused Turkey of using chemical weapons.

Şebnem Korur Fincancı, a professor of forensic medicine who is also president of the Turkish Medical Association (TTB) and the Human Rights Foundation of Turkey (TIHV), stated in an interview with Medya Haber TV that such allegations should be examined by independent committees in accordance with the principles of the UN’s Minnesota Protocol.

“I have examined the images and obviously, one of the toxic gasses, poisonous gasses, chemical gasses that directly affect the nervous system has been used,” Fincanci said.

After this interview, Ankara’s Chief Public Prosecutor’s Office launched an investigation against Fincancı on charges of “making propaganda for a terrorist organization” and “insulting the Turkish nation, the State of the Republic of Turkey, state institutions and organs”.

On October 26, Fincanci was arrested in a house raid by anti-terror branch police officers.

The members of the Central Council of the TTB who wanted to follow the process of taking testimony were not allowed to enter courthouse and were battered by police. The next day, the police once again attacked the representatives of labor and professional organizations who went to the courthouse, and detained five people.

Prior to Fincanci’s arrest, Turkey’s President Recep Tayyip Erdogan targeted her and the Turkish Medical Association, saying: “The judiciary has taken action regarding the President of the Turkish Medical Association. Steps will be taken against both this person and this institution. I believe that the fact that such a person is the head of an institution whose name starts with ‘Turkish’ disturbs all members of our nation.”

Erdogan added that he has “instructed the ministers that the legislative work towards the transition to a new structure in professional organizations, particularly in the Turkish Medical Association, should be accelerated. If necessary, we will ensure that this name is changed [that Fincancı will be replaced by someone else] by legal regulation.”

The head of the Nationalist Movement Party (MHP), Devlet Bahçeli, who is Erdogan’s political ally, demanded that the Turkish Medical Association be closed and Fincancı stripped of her Turkish citizenship.

The footage of Fincanci’s house raid was broadcast with music on the government-funded TRT channel, which alleged that “a terror organizational book and bullets were found in Fincanci’s house.”

The footage once again reignited the question as to whether the Turkish army has used prohibited chemical weapons in its military operations against the PKK in the north of Iraq. Many Kurdish activists across Europe took to the streets to protest the Turkish government.

Meanwhile, international experts have agreed with Fincanci. The Scientific Advisory Board Member of the International Physicians for the Prevention of Nuclear War (IPPNW), Dr. Jan Van Aken, visited the Federal Kurdistan Region of Iraq to investigate the alleged use of chemical weapons by Turkey. “There is a lot of evidence that a chemical attack took place, and an investigation needs to be started,” he told Mesopotamia News Agency.

“The use of chemical weapons is prohibited in international armed conflicts in a series of treaties, including the Hague Declaration concerning Asphyxiating Gasses, the Geneva Gas Protocol, the Chemical Weapons Convention and the Statute of the International Criminal Court.”

After the news reports, Kurdish members of parliament called on prosecutors to start an investigation.

The pro-Kurdish Peoples’ Democratic Party (HDP) released a written statement, calling on the Organization for the Prohibition of Chemical Weapons (OPCW) and the United Nations to examine the claims:

“Since 2021, [Turkey’s] use of chemicals has been in the news periodically. It is claimed that Turkey acts in violation of the international conventions, to which it is a party. These developments cause concern among the peoples of the region and lead the way to possible massacres. We emphasize once again that the use of chemicals is against the Geneva Convention, is a war crime and is clearly a crime against humanity.”

The former HDP co-chair Selahattin Demirtaş (who has been jailed since 2016), said on Twitter that an independent, international delegation should travel to the region to study the claim:

“No one should forget for a moment that the use of chemical weapons is a crime against humanity and there is no statute of limitations for crimes against humanity. Those who commit such a crime will definitely be held accountable before an independent judiciary.”

Meral Danış-Beştaş and Saruhan Oluç, deputy chairs of the HDP, submitted a parliamentary question to Minister of Defense Hulusi Akar:

“Did the Turkish armed forces or some unconventional forces acting together with them use non-official weapons or ammunition in northern Syria and within the borders of Iraq?

“Considering the fact that the use of chemical weapons and/or weapons or tools of mass destruction and vehicles is regarded by laws and international conventions as war crimes and crimes against humanity, do you as the Minister of National Defense plan to invite international delegations to the operation areas to investigate the allegations?”

Sezgin Tanrıkulu, an MP for the main opposition Republican People’s Party (CHP) also called for an investigation on Twitter and submitted a motion to parliament.

Turkey’s government authorities including the Ministry of National Defense rejected the allegations in a written statement:

The Turkish Armed Forces do not use ammunition “prohibited by international law and agreements,” and do not have such ammunition in its inventory, according to the ministry.

The question is: If the Turkish army does not use any chemical weapons, why does the Turkish government not allow an independent committee to investigate the claims?

Turkish prosecutors have not initiated any investigation to find out whether the Turkish military used chemical weapons — but they have taken legal action against those who have called for an investigation. One is lawyer Aryen Turan, currently being investigated by prosecutors over the speech she delivered on October 22 at an Izmir Bar Association Meeting. “Allegations,” she had said, “that the Turkish Armed Forces used chemical weapons against the PKK should be investigated”.

Meanwhile, detentions of those who demand answers from the government are ongoing. On October 20, Turkish police detained several HDP members, including its Istanbul co-chair Ferhat Encü, who had attempted to hold a press conference regarding the allegations.

“The press statement we wanted to hold in (Istanbul’s) Şirinevler district regarding the use of chemical weapons was faced with efforts to prevent it by the blockade of thousands of police. Dozens of our friends, including our co-chair Ferhat Encü, were detained. This aggression is an attempt to cover up chemical weapons, which are crimes against humanity,” HDP Istanbul Branch announced.

On October 26, 11 journalists working for Kurdish media outlets were arrested by police in simultaneous house raids. According to reports, police tortured at least one of them, Öznur Değer, in reverse handcuffs, and dragged her on the ground while in detention.

On the same day, the police prevented Kurds and other pro-democracy activists in Kadıköy, Istanbul from making a statement to the press and protesting the detention of Fincancı. Police also stopped journalists from taking pictures or videos and removed them from the area. Dozens of protesters were detained.

Here is a summary of the Kurdish issue in Turkey: Kurds are traumatized by images that reportedly show their compatriots dying from banned chemical weapons. Their political leaders are arbitrarily arrested and jailed. Their journalists are violently targeted and put behind bars. Their language and ethnic identity are still not officially recognized. With every word they utter that might challenge a government narrative, they face the risk of arrest, torture and even death. The government of Turkey, which is legally obliged to serve and protect Kurds the same as its other citizens, uses every tool to silence and oppress them and to destroy their political will. Yet, they are the ones accused of being “terrorists” and “criminals”.

The tyrannical political environment in Turkey does not allow any dissenting persons — particularly Kurds — to breathe freely. The international organizations and governments urgently need to cease ignoring the Kurds and investigate the allegations regarding the Turkey’s use of chemical weapons.