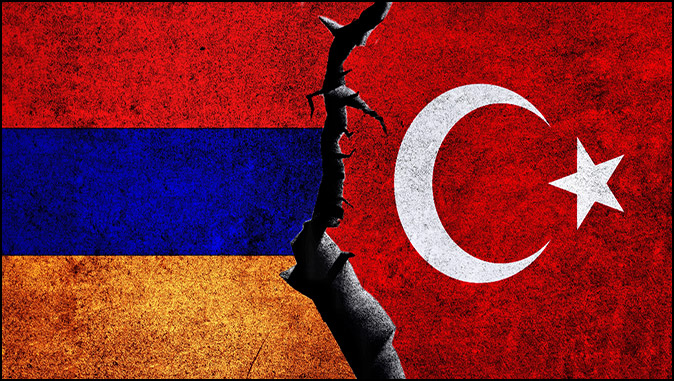 Turkey: Hundreds of Churches and Monasteries Waiting to be ‘Saved’
How the Turkish government deals with the cultural heritage of Christian communities.
By Uzay Bulut

A hundred years after the 1913-23 genocide of Christians by Ottoman Turkey, the last remnants of the cultural and religious heritage belonging to Christians – principally Armenians, Greeks, and Assyrians – are on the verge of extinction.

An Armenian Member of Turkey’s Parliament, Garo Paylan, visited the city of Van on September 2 to take note of the state of what remains of the Armenian patrimony in the city. In an interview with the news website +Gercek, he urged governmental protection for the last of this cultural heritage. Paylan said:

The Armenian people created a remarkable civilization. It prized thousands of cultural assets, monasteries, churches, schools, and hospitals. Unfortunately, following the extermination of the Armenian people, this cultural treasure was intentionally destroyed. In the face of state-organized vandalism, very little of this millennia-old cultural heritage remains today. What still remains standing is taking its last breath. If measures are not taken soon to protect these last vestiges, nothing will be left.

Van is a historically Armenian city which preserved its strong Armenian presence until the genocide.

Paylan noted that he repeatedly sought help from Turkey’s Ministry of Culture for the restoration of the Varakavank Monastery in Van. But the ministry rejected his requests on the grounds that the monastery is now “private property.” Paylan added:

We demand that whoever currently possesses this [monastery] should return it [to its rightful owners]. We learnt that this is now the property of journalist Fatih Altaylı. I don’t understand. Why would a journalist, a journalist from Turkey, own a monastery?

The answer is that many Christian properties, including sites important to the Christians’ cultural and religious patrimony, were illegally seized by the Turkish government, or even private citizens following the genocide.

Such is the fate of most historic churches and monasteries in Turkey.

According to a news report published in the Turkish media on July 4, 2021, a historic Greek Orthodox church in the city of Kayseri “was about to be demolished due to neglect.”

“Because of neglect, the bell tower of the church, whose frescoes were also erased over time, was recently demolished,” said the news report. “The church was plundered by treasure hunters and its walls were defaced with graffiti.”

Anatolia, literally “the land of the sunrise” in Greek, was majority-Christian when Turkic tribes from central Asia invaded in the 11th century.

“Turkey used to be called Anatolia or Asia Minor and was a Christian civilization,” writes Dr. Bill Warner, the president of the Centre for the Study of Political Islam (CSPI). “Islam does not reach a balance point with the native civilization; it dominates and annihilates the indigenous culture over time.”

Dr. Warner notes in another article:

The process of annihilation took centuries. Some people think that when Islam invaded, the Kafirs [non-Muslims] had the choice of conversion or death. No, absolutely not. Sharia law was put into place and the Christian dhimmis continued to have their ‘protected’ status as People of the Book who lived under the Sharia law. The dhimmi paid heavy taxes, could not testify in court, hold a position of authority over Muslims and was humiliated by social rules. A dhimmi had to step aside for the Muslim, offer him his seat, could not carry a weapon, and defer to a Muslim in every way. In all matters of society, the dhimmi had to yield to the Muslim. Over the centuries, the degradation, lack of rights and the dhimmi tax caused the Christian to convert. It is the Sharia that destroys the dhimmis…The Christian and Greek civilization of Anatolia is gone. It is annihilated.

The Christian persecution by Turks culminated during the Christian genocide in Ottoman Turkey. Historians Benny Morris and Dror Zéevi published a book regarding the genocide entitled The Thirty-Year Genocide: Turkey’s Destruction of Its Christian Minorities, 1894–1924.

According to their research, some four million Christians were either killed or deported from Turkey and the adjacent territories of eastern Thrace, Urmia, and the southern Caucasus. While Christians comprised 20% of the population in these areas in the late nineteenth century, by 1924 they consisted of only 2%. It was not only Armenians who were targeted, but also Assyrians, Greeks, and other Christians.

In his review of the book, Professor Alex J. Bellamy writes:

Over the course of 30 years, Christian communities were destroyed as a direct result of government policy, actively supported and abetted by large sections of the Muslim community. Perpetrators included regular soldiers, as well as Turkish and Kurdish irregulars, Kurdish armed groups and ordinary Turks, Arabs, Chechens, Laz and Circassians. The path to destruction included large-scale massacres, forced displacement and forced conversion… [G]enocide targeted Christians as a whole rather than discrete nationalities.

The oppression of Christians in Turkey did not end even after the genocide. Through government policies including a pogrom, deportations and constant pressure, Turkey has managed to wipe out the Christian presence within its borders almost completely. Today, Christians comprise less than 0.1 percent of Turkey’s population of approximately 80 million.

One of the last phases of Turkey’s genocidal process against indigenous Christians was the 1955 pogrom in Istanbul, during which churches, monasteries and schools belonging to Greeks and Armenians were also targeted.

The Ottoman and Turkish governments had a long-established policy of discrimination against the Greek minority, which manifested itself not only in riots but also in anti-Greek laws (reminiscent of the Nazis’ Nuremberg laws) that excluded Greeks from certain professions; the special Wealth Tax of 1942; the recruitment of Greeks and Armenians into special work battalions during World War II; and so on.The Istanbul pogrom was a phase in the Ottoman/Turkish policy of eliminating Greek communities from their 3,000-year-old homelands in Asia Minor, Thrace, the Aegean, and Constantinople itself. Seen in the context of a centuries-old process of discrimination, massacres, and expulsion, it can be classified as a form of genocide. At the same time, the Istanbul pogrom also falls within the definition of crimes against humanity in both the Nuremberg Statute and in the Rome Statute of the ICC [International Criminal Court]. Because these crimes are not subject to statutes of limitations, Turkey still has important international legal obligations to meet.

Yet the government of Turkey, a NATO member and EU candidate, still fails to take measures to protect the historic churches and monasteries whose congregants have already been exterminated.

Apparently, this is how the government of Turkey chooses to deal with the cultural heritage of Christian communities: first, find a way to get rid of Christians – either through killing, deportation or forced assimilation. Change the original names of their villages and towns to Turkish names. Then either seize their properties, including the churches, or leave them to become ruins. And continue to enjoy NATO membership and international standing with total legal impunity.

Uzay Bulut is a Turkish journalist and political analyst formerly based in Ankara.