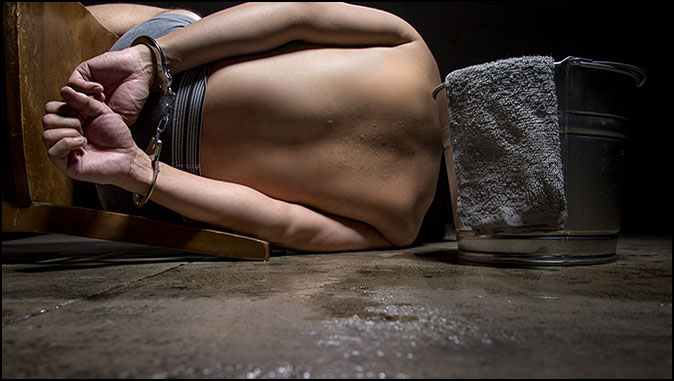 Torture in Turkish Prisons: Systematic and Widespread
By Uzay Bulut

Garibe Gezer, a Kurdish political prisoner who was in solitary confinement in Turkey, recently died in prison after months of torture and rape.

On December 9, the administration of Kandıra Prison called the Gezer family and informed them that their daughter was found dead in her cell. Kandıra, located in the city of Kocaeli, is where many politicians, journalists and human rights activists are imprisoned.

The prison administration allege that Gezer “committed suicide”. Through her letters and conversations with her lawyers and family members, however, Gezer had said that she was kept in a solitary cell where she was systematically tortured and raped by prison guards. The city’s prosecutor’s office has imposed a gag order on the investigation of her death. A disciplinary investigation was also launched against Gezer’s fellow prisoners for protesting her death by applauding.

Gezer’s lawyers went to Kandıra Prison to take the video footage of the moment of Gezer’s death in her prison cell and to meet the prison authorities. However, her body had already been taken to the Kocaeli Forensic Medicine Institute and an autopsy carried out. The authorities did not wait for the lawyers to arrive. Hence, Gezer’s cause of death was not stated in the preliminary autopsy report. On January 4, prosecutors dismissed an investigation into Gezer’s claims of torture and sexual assaults.

Even after Gezer’s death, governmental aggression against her did not end. Her body was taken from the hospital under police blockade. On December 10, activists from various human rights and women’s rights organizations went to Kocaeli’s hospital to collect Gezer’s body for her funeral. The women chanted “Şehid namirin” (a slogan in Kurdish meaning “martyrs are immortal”), as they carried the coffin on their shoulders, but the police officers aggressively reacted, yelling: “What martyr? No chanting! No yelling!”

As Gezer was born in the city of Mardin, her body needed to be taken there for burial. While the coffin was expected to be taken by a hearse belonging to the Mardin Metropolitan Municipality, the vehicle that arrived at the airport was stopped and sent back by the police. The police told Gezer’s family to “take the coffin to Mardin through their own means”. As a result, her body was placed on the bed of a pickup truck and driven to her home in Mardin. According to the Mesopotamia News Agency, the police set up checkpoints along the road where the hearse was to pass.

In December alone, six other Kurdish political prisoners who were ill — Bangin Muhammed, Abdülerezak Suyur, Halil Güneş, Salih Tuğrul, Ilyas Demir and Vedat Erkmen — died in Turkish prisons. The administration of Tekirdag Prison, where Erkmen was incarcerated, also said the prisoner had “committed suicide”. His brother, Saim Erkmen, however, said he believed his brother had been executed:

“My brother’s funeral was abducted from us by the police. My brother was not one to commit suicide. The state killed him. To cover it up, they took him to the Forensic Medicine Institute without first informing us and his lawyers… And because they killed him, the autopsy was done in secret from us.”

“104 detainees and convicts have lost their lives in prisons since 2020, and at least 7 people have died this month. According to rights defenders and many lawyers, the reasons for these deaths include the pressure on prisoners in prisons and the failure to deliver sick detainees to health services on time…. Rights defenders point out that many of these deaths are ‘suspicious’.”

The findings of the “Rights Violations in Prisons in 2021” report by the Diyarbakir Bar Association issued on December 30 confirmed Birgun’s report:

“Prisons in Turkey have almost become sites of torture where all kinds of inhuman and degrading treatment, especially violations of the right to life, are practiced… [including] deaths [killings], [unlawful] transfers to other prisons, torture and ill-treatment, solitary confinement and isolation, obstacles before seeing families, obstruction of communication rights, disciplinary investigations, and keeping sick prisoners in prison.”

Meanwhile, Aysel Tuğluk, a former vice chair and MP of the pro-Kurdish Peoples’ Democratic Party (HDP) and a former co-chair of the Democratic Society Congress (DTK), has been behind bars since December 2016.

In 2017, Tuğluk was exposed to physical and verbal attacks during her mother’s funeral in Ankara as reported by Raffi Bedrosyan. She was released from her prison cell for the occasion, but eventually prevented from burying her mother, who practiced the Alevi religion:

‘A group of 30 fanatical ultranationalists showed up at the grave site with a tractor, chanting slogans such as ‘These are Turkish lands, these are not Armenian lands,’ ‘Burial of Alevis, Armenians, and Kurds is not allowed here,’ ‘Seeds of Armenian[s] not allowed in a Turkish cemetery,’ and more ominously, ‘If you don’t remove this coffin, we will shred it to pieces.’

“Soon the mob increased to 100 people, and they started throwing stones at the mourners, including Tuğluk. Although many police officers were present, they simply watched the mob without interfering. In fact, several attackers seemed to know the officers and addressed them by name.”

The funeral was moved, but without Tuğluk, who was sent back to prison.

Tuğluk’s lawyer, Reyhan Yalçındağ, says that the attack at her mother’s funeral marked the beginning of the decline of her health and eventually led to the memory loss from which she currently suffers.

Meanwhile, doctors at the Kocaeli School of Medicine examined Tuğluk for eight months and stated that, due to her chronic disease, the serving of her sentence should be deferred. The government-funded Forensic Medicine Institute announced, however, that Tuğluk could get medical treatment in prison. On September 3, based on the report by the Forensic Medicine Institute, Kocaeli Chief Public Prosecutor’s Office rejected the request for a deferral. As a result, Tuğluk remains in prison.

The Istanbul branch of the Human Rights Association issued a statement calling for her release:

“In the Kocaeli University Forensic Medicine report dated July 12, 2021, it was clearly stated that Tuğluk has ‘dementia’ and that she needs the help of others to survive. The life of Tuğluk, whose disease is rapidly progressing, is put at risk.”

On December 9, several national and international anti-torture organizations — the Centre for Social Support, Rehabilitation and Re-adaptation for Victims of Torture, War and Violence; Civil Society in the Penal System; Foundation for Society and Legal Studies; Human Rights Association; Human Rights Foundation of Turkey; and the Europe Branch of the World Organization Against Torture — issued a joint press release stating that “torture remains widespread” in Turkey:

“Five years have passed since the Special Rapporteur on torture conducted his visit to Turkey to assess the prevailing situation and challenges concerning torture and other cruel, inhuman or degrading treatment or punishment. Although the officials in Turkey had stated at the time their commitment to investigate, prosecute and punish those responsible for the use of torture and other forms of ill-treatment, the grim reality on the ground tells a different story. In fact, several regressive measures have been implemented that are considered as a significant backslide in terms of tackling impunity and guaranteeing basic human rights.

“A rise in incidents of torture, ill-treatment, and cruel and inhuman or degrading treatment in police and military custody and in prison over the past years has overshadowed Turkey’s earlier progress in this area. This has been due, among others, to the violation of procedural guarantees, long-term custody periods, and willful negligence that have become a common practice at various levels of the State.

“There is also a steady increase in the use of the anti-terrorism law against individuals by public prosecutors. The concept of ‘terrorism offences’, which is highly problematic regarding its broad and vague definition, has been instrumentalized and misused as a pretext to silence, oppress and criminalize political dissidents. According to the data provided by the Council of Europe, Turkey has the largest population of inmates convicted for terrorism-related offences. The country’s prison population rate has increased by 115.3 percent in the last 10 years; this has led to Turkey having the highest incarceration rate of the 47 Council of Europe member countries in 2020.”

“Torture has remained the most dominant human rights problem in 2021 in Turkey as well in spite of the fact that it is a crime against humanity and is absolutely prohibited by the Constitution and universal law, which Turkey is a part of. Acts of torture and ill-treatment at official custodial places as well as extra-custodial places, in the streets and outdoors or in spaces like homes and offices along with the “extreme and disproportionate interference” of the law enforcement amounting to the level of “torture” in assemblies and demonstrations have come to bear a novel dimension and intensity. One can argue that the whole country has virtually become a space of torture today as a result of the political power’s mode of government based on repression and control.

“It is also quite alarming that enforced disappearances/abductions, which account for one of the most disgraceful human rights violations in recent history and qualify as a crime against humanity, have also been witnessed in 2021 and the number of such cases has gone up again since 2016 when the state of emergency was declared.

“Prisons, which are an unmediated sign of a state’s respect for human rights, have become extremely overcrowded today as a result of the political power’s abuse of law as an instrument of repression and intimidation in Turkey. Prisons are places where gross and serious violations are committed ranging from the right to life to torture, and to right of access to healthcare.”

Political prisoners in Turkey are systematically mistreated and even tortured for having the “wrong” political thoughts or for being labelled by the government as “enemies” or “terrorists” The situation of sick political prisoners is rarely covered in the mainstream Turkish media. Sadly, the pro-government media seems to view dissident prisoners as traitors or terrorists who deserve death.

Even the dead bodies of political prisoners are not respected by the government. In many cases, autopsies are done without the presence of the prisoners’ lawyers or family members. Many prisoners are incarcerated solely based on false statements by “protected,” often anonymous witnesses (called in Turkish a “secret witness”). Thousands of innocent people are rotting in Turkish prisons for allegedly being or supporting “terrorists” when there is no evidence against them that could reasonably be considered “terrorism.” The “terrorism” charges brought against those defendants are extremely vague and imprecise. Attempts at defense are also undercut. According to Mary Lawlor, UN Special Rapporteur on the situation of human rights defenders:

These oppressive measures, which operate systematically across Turkey, appear primarily designed to lead to the punishment and destruction of those who might criticize or challenge the government.