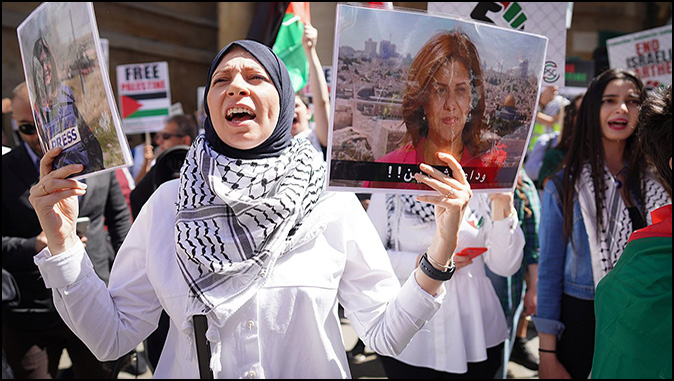 The Rush to Demonize Israel After Fatal Shooting of Al Jazeera Journalist
The haters declare Israel guilty — without evidence or investigation.
By Joseph Klein

Al Jazeera’s Palestinian-American correspondent Shirin Abu Akleh, 51, was shot to death on May 11th during clashes between armed Palestinians and Israel Defense Forces (IDF) in the West Bank city of Jenin. Hamas, the Palestinian Authority, and their enablers have exploited the journalist’s tragic death as fodder for a malicious propaganda campaign against Israel. They have charged, without a shred of evidence, that Israel deliberately targeted Ms. Akleh for assassination.

The Qatar-owned Al Jazeera itself blamed Israeli forces for its correspondent’s killing, labeling it “a blatant murder, violating international laws and norms.” Al Jazeera accused Israeli soldiers of assassinating Ms. Akleh in “cold blood” and “targeting her with live fire,” prior to the completion of any credible, transparent investigation.

It is one thing for the media outlet to mourn the loss of one its own and demand such an investigation. It is quite another for Al Jazeera, which claims in its Code of Ethics that it endeavors “to get to the truth,” to immediately convict Israeli soldiers in the court of public opinion with no established basis in fact.

Israeli authorities want to get to the truth of what happened during Israel’s counter-terrorism operation. They are considering the possibility that one of IDF’s own soldiers could have accidentally shot Ms. Akleh while trying to target one of the Palestinian gunmen who were firing barrages of bullets at the Israel Defense Forces. But Israeli authorities are also considering the alternative possibility that one of the Palestinian shooters might have killed Ms. Akleh, who was nearby and caught in the crossfire.

Israel offered to conduct a joint investigation with Palestinian authorities in the presence of impartial observers. However, the Palestinians refused the offer and are also withholding key evidence such as the bullet recovered from Ms. Akleh’s body.

Avichai Edrei, the Arabic-speaking spokesman for the IDF, said, “We call on the Palestinians to investigate the issue in a joint pathological investigation. The State of Israel is in favor of the truth. Until now, they are refusing, perhaps in order to hide the truth. We express regret over the journalist’s death.”

A spokesman of the Palestinian Authority, Ibrahim Milhim, was dismissive of Israel’s offer of cooperation in trying to find out what truly happened. “Let me ask, when does the criminal have the right to take part in the investigation against his victim?” he said sarcastically.

Palestinian leaders are not interested in finding out the truth. They are weaponizing the death of Ms. Akleh in their never-ending battle to demonize and delegitimize the Jewish State of Israel.

Hamas added its own fuel to the fire: “The assassination of the occupation media, Shireen Abu Akleh, is premeditated murder and is condemned in the strongest terms. It will not obscure the reality of the occupation’s terrorism and brutality.”

The latter statement comes from the same terrorist organization that has committed brutal crimes against journalists who deviated from Hamas’s party line.

For example, Hamas detained and tortured Palestinian journalist Hani Al-Agha, according to the International Federation of Journalists. He was ultimately released only after suffering what has been described as life-threatening injuries.

Even the Palestinian Journalists Syndicate said that it “considered the brutal torture of Al Agha a crime against him and the right to freedom of information and an attempt to intimidate journalists in Gaza Strip, who are subject to repressive police authority.”

Hamas is the repressive police authority in Gaza intimidating journalists there.

The Palestinian Center for Development and Media Freedoms (MADA) reported that Hani Al-Agha was among 19 journalists and media workers detained during just a three day period in 2019, most of whom were assaulted. Hamas security forces assaulted other journalists as well.

Iran’s foreign ministry spokesman, Saeed Khatibzadeh, brazenly declared: “The Israeli propaganda machine and its affiliated media outlets, contrary to the ongoing false claims, are afraid of dissemination of truth and accurate news reports and they go as far as to even kill journalists.”

This is a perfect case of the pot calling the kettle black.

The Committee to Protect Journalists (CPJ) reported a fairly recent example of how the Iranian regime kidnapped and killed a journalist who was critical of the regime and its leaders.

“Iranian authorities executed journalist Roohollah Zam by hanging on December 12, 2020 after sentencing him to death on anti-state charges for his coverage of protests in 2017,” according to CPJ. “Intelligence agents of the Islamic Revolutionary Guards Corps (IRGC) lured Zam to Iraq, where he was abducted on October 14, 2019, and taken to Iran, according to news reports.”

The Iranian regime’s terrorist proxy, Hezbollah, joined the chorus condemning Israel with no evidence for allegedly murdering Ms. Akleh. Hezbollah described Ms. Akleh as a “resistance journalist who had been pioneer in covering the Zionist crimes against her people throughout twenty years.”

Hezbollah has done everything it can to cover up its own crimes against the Lebanese people, including journalists.

In early 2021, for example, a prominent Lebanese publisher and fierce critic of Hezbollah, Lokman Slim, was found shot dead in his car in southern Lebanon. Members of Hezbollah had threatened Mr. Slim’s life on multiple occasions for months prior to his murder.

Despite Hezbollah’s denial of involvement in Mr. Slim’s murder and its call for an “investigation,” Hezbollah is almost certainly the culprit, according to most Lebanese media outlets that are not Hezbollah affiliates or boosters.

Jawad Nasrallah, the son of Hezbollah leader Hasan Nasrallah, tweeted the following right after Mr. Slim’s murder was confirmed, as reported by The Guardian: “The loss of some people is in fact an unplanned gain #notsorry.” He later deleted the tweet and denied that he had meant to refer to Mr. Slim.

Hezbollah does not have to worry about any serious investigation by the Lebanese government into Hezbollah’s likely involvement in the murder of Mr. Slim, as well as murders, assaults and intimidation of other journalists who have dared to challenge Hezbollah. The well-armed terrorist organization, whose claws reach into Lebanon’s governmental, military, and security institutions, can count on continued impunity from accountability for its crimes.

The anti-Israel contingent in the U.S. House of Representatives has also exploited the killing of Shirin Abu Akleh.

On the day that the shooting occurred, prior to any investigation and with no evidence, Palestinian-American Rep. Rashida Tlaib, one of the progressive House Democrat Squad leaders, posted an outrageous accusatory tweet. Dripping with her hatred of Israel, the tweet was so typical of Tlaib:

“When will the world and those who stand by Apartheid Israel that continues to murder, torture and commit war crimes finally say: ‘Enough’? Shireen Abu Akleh was murdered by a government that receives unconditional funding by our country with zero accountability.”

Kudos to Aviva Klompas for her pointed reply to Tlaib, which should apply to all those haters so eager to engage in blood-libels against the Jewish State of Israel.

Ms. Klompas, a former director of speech writing for Israel’s Permanent Mission to the United Nations and co-founder of the nonprofit think-action tank known as Boundless, noted that Tlaib had made her accusation before any investigation was even underway.

“There is ZERO evidence that Shireen Abu Akleh was killed by an Israeli bullet. Verify before you vilify. Demand an investigation instead of demonizing Israel.”