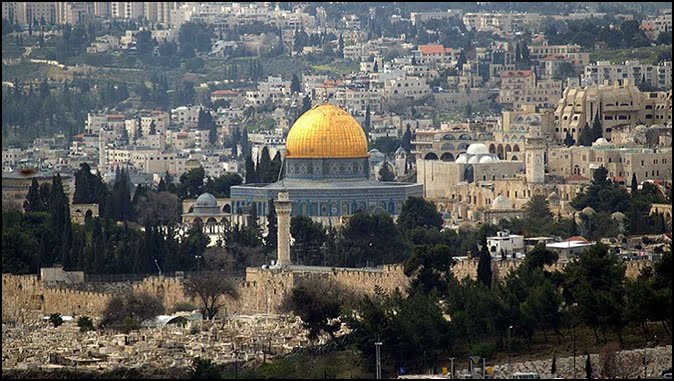 The Quiet Struggle Over Jerusalem’s Temple Mount
Jordan vs. Turkey.
By Joseph Puder

There is a quiet struggle going on over control of East Jerusalem’s Noble Sanctuary (Haram al-Sharif) or Temple Mount. It is not as you might guess between Israel and the Palestinians. It is actually between two Sunni-Muslim nations, the Hashemites Kingdom of Jordan and Erdogan’s Turkey. To the extent that Israel is involved in this quiet struggle, it is to strengthen Jordan’s position against the encroaching Turks, by adding Saudi representatives to the Islamic Waqf Council. The Islamic Waqf Council controls the activities surrounding the Noble Sanctuary or Temple Mount. Israel has engaged the U.S. administration to mediate the issue with the Saudis.

The Hashemites, who once controlled Mecca and Medina, Islam’s holiest sites, lost out to the Saudis in the 1920’s. The Hashemites are related by a bloodline to the Prophet Mohammad through his daughter Fatimah and her husband Ali, the Fourth Caliph. Hasan, the son of Fatimah and Ali, is the progenitor of the Hashemite line, which is a subdivision of the Quraysh tribe. The consolation prize was control over Islam’s third holiest site -The Noble Sanctuary or Temple Mount where the Al-Aqsa and Omar mosques are located. The Prophet Mohammad is said to have flown from the al-Aqsa mosque to heaven on his horse named Buraq.

Given the historical rivalry between the House of Saud and the Hashemites, Jordanians in the past would not contemplate allowing their Saudi rivals a foothold in Jerusalem’s holy places. But now, after 100 years, Erdogan’s Turkey is challenging Jordan’s control over the Temple Mount. Jordan, under the Hashemite King Abdullah II, is finally relenting to the Saudis out of financial necessity and a looming threat from Erdogan’s Turkey.

Even more significantly, Turkey’s influence peddling in Jerusalem is not limited to the Temple Mount. In its efforts to bolster the Palestinians, Erdogan’s Turkish government delivered a treasure trove of 140,000 pages of microfilm, which includes land registrations under the Ottoman Empire from 1517-1917. The Palestinian Authority (PA) has used it to challenge Israeli ownership of real estate in various parts of the country. The Turkish development NGO or TIKA, working on behalf of the Turkish government has invested around $1.3 million annually in Jerusalem, the West Bank, and Gaza. The Turkish organization, “Our Legacy,” funded by TIKA, has as its goal the “protection of the Al-Aqsa mosque, and the Ottoman legacy in Jerusalem.

Recep Tayyip Erdogan, Turkey’s dictator, views himself as the patron of the Muslim Brotherhood. He also sees himself as the leader of the Sunni-Muslim world, and as the one to restore Islam’s glory throughout Palestine and in Jerusalem in particular. Turkey now sponsors cultural events in Jerusalem, always decked with Turkish flags. Erdogan’s Turkey is pursuing “Dawa” or as some might call it “quiet jihad.” It is done through charity, Islamic education, and social assistance with the ultimate goal of bringing people closer to Islam. The Turkish Cultural Center in Jerusalem is cooperating with Jerusalem’s Islamic Waqf. It has also funded Sheikh Ekrima Said Sabri, the former Mufti of Jerusalem, who called suicide bombing in Israel “legitimate.” Sabri is identified with Hamas and the Muslim Brotherhood. He is also a close associate of Sheikh Raed Salah, who has been head of the outlawed (by Israel) Northern Branch of the Islamic Movement in Israel.

According to David Koren, former adviser to the mayor of Jerusalem, “Turkish popularity in eastern Jerusalem has grown so much in recent years that leaders of Jordan, Saudi Arabia, and the PA have told Israel that Erdogan was building up spheres of influence in eastern Jerusalem that jeopardized their interests and those of Israel.”

The Hashemite Kingdom of Jordan informed the U.S. and Israel that it would allow Saudi representatives to join the Waqf Council on the following conditions: 1. Jordan is to retain its exclusive status on the Temple Mount. 2. That Saudi Arabia transfers millions of dollars to Islamic NGO’s operating in east Jerusalem (to offset Turkey’s charities), and 3. Saudi Arabia is to apply diplomatic pressure to expel the Turkish Islamic organizations operating under Palestinian auspices. The Saudis who see Erdogan’s Turkey as a rival in the Islamic world, would be happy to comply.

Reuter News reported (March 7, 2018) that the Saudi Crown Prince Mohammed Bin Salman (MBS), in an interview with the Egyptian media as reported by the Egyptian newspaper Al-Shorouk, described Turkey as “part of a triangle of evil,” along with Iran and hardline Islamist groups. MBS accused Turkey of trying to reinstate the Islamic Caliphate.

Turkey’s Foreign Minister Mevlut Cavusoglu, and its highest military officer, Gen. Hulusi Akar visited Jordan in February 2018, in what appeared to be an effort to upgrade the two countries bilateral relationship. However, Jordan announced a month later that it suspended its free trade agreement with Turkey. While Erdogan seeks to show that his country is not isolated in the Arab world, Jordan was not going to be another Qatar (Qatar is the exception in being allied with Turkey). Jordan cannot afford to alienate Saudi Arabia and the other Arab Gulf states who are critical of Turkey, including Turkey’s support of Qatar. Qatar it is being boycotted by Saudi Arabia, and its allies in the Gulf Cooperation Council (GCC).

Saudi Arabia and its Gulf allies are a vital source of foreign aid for Jordan’s weak economy. Jordan has received a $5 billion aid package from Saudi Arabia and its GCC allies. Moreover, there are about 800,000 Jordanians working in GCC countries, the majority of them in Saudi Arabia and the United Arab Emirates (UAE). A close relationship between Jordan and Turkey could potentially jeopardize Saudi aid to Jordan and may cause the expulsion of Jordanian workers in Saudi Arabia. Jordan depends heavily on the remittances of these workers. Most importantly, Jordan is also concerned with Turkey’s support of the Muslim Brotherhood in Jordan, which dominates the opposition in Amman.

The U.S., Israel, and Jordan are hoping to involve the Saudis in managing the affairs on Temple Mount and east Jerusalem. As part of such an involvement, the expectations are that the Saudis would effectively compete with the Turkish investments in east Jerusalem. This would restore the now weakened position of the Hashemite Kingdom on Temple Mount, and east Jerusalem, vis-à-vis the Turks. The combination of Israel, Jordan, and Saudi Arabia working together as an axis would be the fulfillment of the vision the late Israel Prime Minister Itzhak Rabin and the late king Hussein of Jordan. This was expressed during their peace talks in 1994. They envisioned a multi-religious directorship on the Temple Mount that is holy to Jews and Muslims alike.

Thanks to the President, U.S. Policy Heading in the Right Direction

Thanks to the President, U.S. Policy Heading in the Right Direction By Majid Rafizadeh Originally…

Palestinians: A State Within a State?

Palestinians: A State Within a State? By Khaled Abu Toameh Originally Published by the Gatestone…

From Slavery to Freedom

From Slavery to Freedom By Daniel Greenfield As another Passover begins, the echoes of "Once…

Syrian Warplane Bombing: A Turning Point In The Conflict?

Syrian Warplane Bombing: A Turning Point In The Conflict? The US sends Assad and Russia…

The End of Palestine

The End of Palestine Israel has the opportunity to reclaim its nation. By Daniel Greenfield…