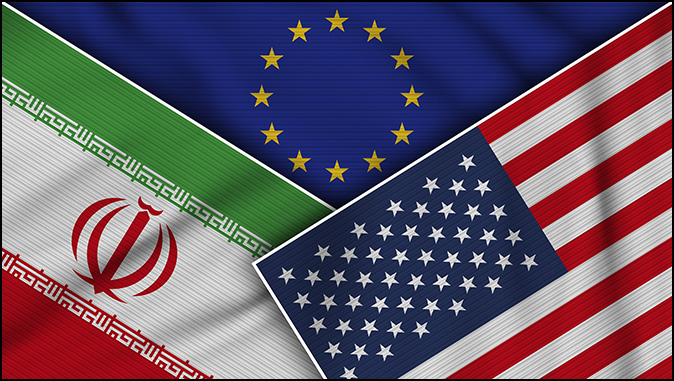 The Biden administration and the European Union are trying hard to appease the Iranian regime in order to revive a nuclear deal that will provide the ruling mullahs of Iran with additional billions of dollars of revenue, enhance the regime’s legitimacy on the global stage, and actually open the path for Iran to have a nuclear arsenal.

The EU recently dropped its own bomb when it unabashedly said that it wanted new nuclear deal so that EU countries could buy oil from Iran — one of only four countries on the US State Department’s list of state sponsors of terrorism (the other three are Cuba, Syria and North Korea). Josep Borrell, the EU’s foreign affairs representative, recently said:

“We Europeans will be very much beneficiaries from this [nuclear] deal, the situation has changed now. For us it was something…’well we don’t need it’, [but] now it would be very much interesting for us to have another [crude] supplier.”

The EU is basically admitting that it views the nuclear deal with Iran’s ruling clerics from the perspective of economic opportunity. That should not be the objective of the nuclear talks. Instead, European leaders ought to be seeking a strong deal that will prevent the Iranian regime from acquiring nuclear weapons, especially — as they should have learned from Russia by now — because those nukes may soon be aimed at their countries.

In addition, by revealing its desperation to buy oil, the EU is empowering Iran’s ruling clerics to gain the upper hand in the nuclear talks and obtain even more concessions to revive the nuclear deal. Desperation, to the Iranian regime, means weakness.

The recent statement by Borrell has also made the Iranian regime more determined to cling to its top demand: removing the Islamic Revolutionary Guard Corps (IRGC) and Quds Force from the lists of terrorist organizations. The designation of the IRGC as a foreign terrorist organization has nothing to do with Iran’s nuclear program, but is linked to the IRGC and Quds Force terror activities across the world.

Now, however, the EU appears to have given in to the Iranian leaders’ demand. The EU suggested recently that it is offering a compromise to delist the IRGC from the terror list as a last attempt to revive the nuclear deal. “At a certain moment,” Borrell pointed out this week, “I will have to say, as coordinator [of the Vienna talks] I make this proposal on the table, formally… the only equilibrium point possible would be this one.”

To appease Iran’s mullahs, the EU and the Biden administration are also turning a blind eye to China’s violating the sanctions on Iran. China has been steadily ramping up its oil imports from Iran, to currently nearly 1 million bpd, and global oil prices have increased. Reportedly, the Iranian regime is exporting more than 1.5 million bpd. The ruling mullahs of Iran are exporting approximately 80% of the oil they used to export before the sanctions. Iran’s revenues heavily rely on oil exports; the sale of oil accounts for more than 50% of the regime’s export revenues.

The EU, moreover, has yet to join the US in imposing sanctions on the Iranian regime. In fact, European countries are still trading with Tehran in spite of the US sanctions. Tehran Times reported:

“The value of trade between Iran and the European Union reached €4.863 billion in 2021, registering a nine-percent growth compared to the previous year…. According to the data released by the Tehran Chamber of Commerce, Industries, Mines and Agriculture (TCCIMA), Iran exported €554 million worth of commodities to the union during the said nine months, while importing goods valued at €2.7 billion”.

It seems clear that the nuclear deal was never about stopping the predatory regime of Iran from obtaining nuclear weapons. For the EU, the nuclear deal is about trade, making money and buying oil from the world’s leading state sponsor of terrorism; for the Biden administration, it is about a “diplomatic win”. In return, the ruling mullahs will have a legal path to blackmail the world, using nuclear weapons and missiles, into sending Iran’s regime billions for their terror and militia groups to torment everyone.