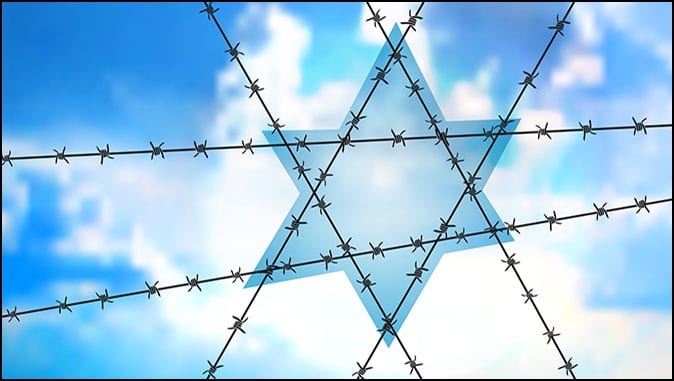 The Duped Generation that Supports BDS
By Richard Kemp

Yet again we approach the depths of the annual Jew Hate Week around the world. Its organizers know better than to call it what it is. They brand their hatefest “Israel Apartheid Week”, but their true meaning and purpose is blindingly obvious. Since its early festerings in Toronto in 2005, Jew Hate Week has inflicted itself on the world, polluting universities from America to Australia and from South Africa to Northern Ireland.

Held on campuses at around this time each year, Jew Hate Week is the racist Boycott, Divestment and Sanctions (BDS) movement’s flagship event for subverting university students to their malevolent cause. Palestinian-led, at the forefront of BDS are Students for Justice in Palestine and Jewish Voice for Peace in the US, and Palestine Solidarity Campaign (PSC) and War on Want in the UK. Democrat Squad members Ilhan Omar and Rashida Tlaib are among its main cheerleaders in America. In Britain, disgraced former Labour Party leader Jeremy Corbyn is a staunch supporter as are many of his party including members of parliament.

BDS trumpet their claim to support “freedom, justice and equality” for the Palestinian people. They are less open about their desire to eradicate the Jewish state for fear they would lose backing from individuals and organizations that have a genuine desire to improve the lives of Palestinians but do not want to eliminate a whole country and its Jewish citizens.

Qatar-born Omar Barghouti, founder of BDS, has repeatedly rejected a two-state solution, instead advocating one state: “Definitely, most definitely, we oppose a Jewish state in any part of Palestine”. He makes clear that his definition of “Palestine” includes the entirety of the State of Israel.

Barghouti’s fellow traveller, Harvard graduate, writer and activist Ahmed Moor agrees: “BDS does mean the end of the Jewish state”. Across the Atlantic last week, notorious BDS supporter Professor David Miller of the UK’s Bristol University demanded an “end” to “Zionism as a functioning ideology”. Zionism is support for the existence and development of the State of Israel. Miller’s message is therefore a barely-veiled code for ending the existence of a universally-recognised democratic UN member state. His poison was reinforced this week by fellow BDS proponent and former Labour MP Chris Williamson, quoting terrorist hijacker Leila Khaled in the process.

While purporting to be a nonviolent movement, internationally proscribed terrorist groups — such as Hamas, Palestinian Islamic Jihad and Popular Front for the Liberation of Palestine — are represented on the BDS National Committee. Barghouti says: “We’re not ashamed to have armed resistance in addition to peaceful resistance throughout our existence.” He and his henchmen refuse to condemn terrorist violence.

I have discussed all this with students brandishing BDS placards while squawking cliché-ridden slogans during Jew Hate Week on various campuses, including New York University and the University of Bristol, at the invitation respectively of Realize Israel and the Pinsker Centre, two outstanding student bastions against Jew hate. All the protesters I met denied that they thought Israel should be destroyed or that they supported violence. Young and impressionable men and women, whose main attention is on studying for their degrees, have been duped by Barghouti’s BDS rabble-rousers into thinking they were demonstrating in support of a two-state solution to be achieved by peaceful means.

The real truth about the global BDS movement is understood by very few and is even more squalid than any of their publicly declared or privately whispered grandiose ideas for political change. A 2015 report by Israel’s Knesset showed that BDS had no impact on the country’s economy and was not expected to in the future. Israel’s exports to the EU, where BDS is strongest, had nearly doubled since the movement was founded 10 years earlier. In 16 years, BDS have not laid a glove on Israel, achieving none of their main objectives. Despite endless efforts to boycott, divest from and sanction the Jewish state, they have had zero effect on its economy, politics or culture.

That stark and indisputable reality points to their genuine but unspoken purpose. The leaders of the BDS movement are far from stupid. They know from bitter experience that they cannot and will never end the Jewish state economically and are incapable of taking on the might of the Israeli military. Instead, their campaign is all about hounding Jews wherever they can find them, to punish Jews around the world for the existence of the Jewish state and undermine support for Israel among Jews as well as non-Jews. The strongest supporters of Israel outside the country are members of the diaspora. Depleting that support and persuading Jews to vilify Israel is the goal of the BDS movement.

The BDS movement and associated anti-Israel propagandists have successfully turned many Jews against Israel, with some even joining BDS. This increases year on year. Witness Jewish Voice for Peace, leading the charge in the US; and in Britain, Jewish Voices for Labour, among whose founders was the BDS vanguard, PSC.

BDS tells its supporters that it is “an inclusive, anti-racist human rights movement that is opposed on principle to all forms of discrimination, including anti-semitism and Islamophobia”. That is a lie. Evidence of its true nature can be found in the classic antisemitism that permeates so much of its activity, including calling for death to Jews, attacking the Jewish religion, targeting people for being Jewish, and promoting blood libels, Holocaust denial and Holocaust approval. All of this has been extensively documented in a May 2020 report by CAMERA, the Campaign for Accuracy in Middle East Reporting and Analysis. A 2017 dossier from Jewish Human Rights Watch in the UK showed that almost 50% of Scottish PSC’s supporters had openly shared antisemitic material on social media accounts.

As well as successfully recruiting unwitting Jews, the BDS movement has succeeded in inciting and incubating active antisemitism on campus. AMCHA, a US nonprofit that documents, investigates and combats antisemitism at colleges and universities, finds that: “Schools that are promoting BDS or other kinds of anti-Zionist rhetoric… are three to eight times more likely to have incidents that target Jewish students for harm,” including assault, the suppression of speech, and destruction of property.

BDS has also succeeded in making life worse for Palestinian Arabs, the very people they falsely claim to help. This includes backing and strengthening the leadership of the Palestinian Authority (PA) and Hamas, both of whom for decades have used their own people as political pawns against Israel — their welfare and prosperity, and often their very lives, thrown away on the altar of hatred for the Jewish state. Vast international funds provided to assist them have been systematically embezzled by their leaders for their own enrichment, used to violently attack Israel, murder Jews and condition Palestinian children to hate the Jewish state. This month, the UK’s Jewish News revealed that $145 million of British taxpayers’ money has been spent on incitement in Palestinian schools since 2016 alone.

Time after time, Palestinian leaders have rejected all efforts at peace, preferring poverty for their people, violence and endless conflict to any proposals to share the territory with Jews. Despite anything he might say in English, the unwavering policy of Holocaust-denying PA President Mahmoud Abbas, now in the 17th year of his four-year term, remains the same as the declared stance of the BDS leaders: a one-state solution and the eradication of Israel.

Flaunting their favourite slogan in Israel Apartheid Weeks, the BDS movement brands Israel an “apartheid state” at every turn. That is one reason for their abject failure: no government or international institution believes them. On the contrary, they know it is the Palestinian Authority and Hamas that are practitioners of apartheid. Using words chillingly resonant of the Third Reich, Abbas said during a speech in Egypt: “In a final resolution, we would not see the presence of a single Israeli — civilian or soldier — on our lands”. He meant Jews. Israeli Arabs would be welcomed.

Within territory controlled by the PA, since 2010 the punishment for selling land to Jews has been death. Although there have been many extrajudicial killings of those who transgressed, no court has so far handed down the death sentence. But several Palestinians have received severe punishments. For example, in 2018, a court in Ramallah sentenced a Palestinian man from east Jerusalem to life in prison with hard labour for trying to sell property to Jews.

Meanwhile, as well as the 1.8 million Arab Israelis (approximately 20% of the population), all of whom have equal citizenship and rights in Israel, thousands of Palestinian Arabs travel to work at Israeli businesses. That is something the BDS movement have done their best to put a stop to. For example, hundreds of Palestinian Arabs were laid off and their families deprived of income in 2015 when BDS protests against SodaStream forced the relocation of their factory from Judea to the Negev. Not content with that, Barghouti’s BDS continued to protest against SodaStream’s new factory, which employs more than 300 Bedouin Arabs.

Most of the hapless students in Britain, America and elsewhere who naively support BDS have little idea of any of this. They have been betrayed above all by the very university professors whose job is to guide and influence them for the good, not to hoodwink them into such a pernicious cause.

US Secretary of State Antony Blinken says that he and President Biden are “resolutely opposed” to BDS because it “unfairly and inappropriately singles out Israel and creates a double standard”. In other words, it is antisemitic. The US administration should take up the plans made by former Secretary of State Pompeo to target organisations that engage with or otherwise support BDS, such as Amnesty International, Oxfam and Human Rights Watch, and cut off government funding.

British and European governments should follow suit, as should all nations where BDS has taken hold. They should be in no doubt that the purpose of this venomous movement with its Jew Hate Weeks and other poisonous activities is not to effect legitimate political change or support Palestinian people as they duplicitously claim, but to exploit the Israel-Palestinian conflict as an excuse to terrorise, bully, harass and drive out Jews at every opportunity.

Colonel Richard Kemp is a former British Army Commander. He was also head of the international terrorism team in the U.K. Cabinet Office and is now a writer and speaker on international and military affairs. He is a Shillman Journalism Fellow at Gatestone Institute.