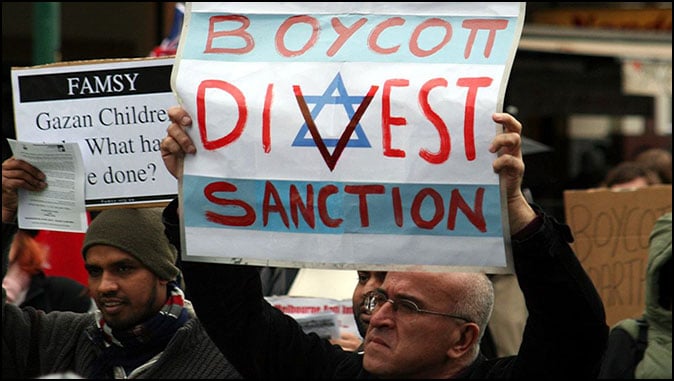 The Anti-Israel Bias of the Middle East Studies Association
Look who’s leading the boycotting of Israel.
By Joseph Puder

The anti-Israel and antisemitic Boycott, Divestment, and Sanctions (BDS) Movement were given another win by an American academic association this time; it was the Middle East Studies Association (MESA). On March 23, 2022, its membership approved a resolution endorsing “the Palestinian call for solidarity in the form of Boycott, Divestment and Sanctions (BDS).” The vote was 768-167 in favor of the resolution, which held Israel accountable for alleged human rights violations as suggested by the pro-Palestinian-led organization. The resolution calls for an academic boycott of Israeli institutions and universities.

It is rather ironic, if not extremely cynical that the actual founder of the BDS Movement, Omar Barghouti, a Palestinian-Arab who was born in Qatar, not in “Palestine,” received his Master’s degree in philosophy in the heartland of Zionist Israel, at Tel Aviv University. He and many of his fellow Palestinian students have enjoyed total academic freedom there, including participation in anti-Israel demonstrations, that they wouldn’t dare hold in Palestinian universities, where they would likely be beaten, arrested, banished, or even killed.

The same Barghouti who incites against Israel worldwide, with charges of “apartheid,” declared in June 2013, “We have no faith in the so-called negotiations,” and rejected the idea of a two-state solution. He has likewise rejected peace between Israel and the Palestinians, and advocates the dissolution of the Jewish state. When asked by an Arab interviewer Ali Mustafa (Electronic Intifada, May 2009) to explain calling Israel “an apartheid state,” he claimed that “he doesn’t need to prove it…”

The fact that Arab-Israelis (some calling themselves Palestinians), are involved in every facet of Israeli life, from being members of the Knesset (Israeli Parliament) to Supreme Court Judges, high ranking military officers, hospital doctors and administrators, pharmacists, university professors, and now the Arab-Islamic party Ra’am, being part of the Israeli coalition government makes Barghouti’s claims willfully outrageous. As to the Palestinians in Judea and Samaria (West Bank) and in the Gaza Strip, their terror against Israeli Jewish civilians necessitates Israeli safety measures such as a security fence, check-points, and secure roads for Israelis living in these parts. Let us be clear, Palestinians in the West Bank are not Israeli citizens, and have rejected statehood and compromises for peace time and time again.

The fact that MESA members have endorsed the BDS Movement makes them complicit in partnering with terror, rejection of peace, and a two-state solution. Authoritarian and undemocratic entities such as the terrorists Hamas and Palestinian Islamic Jihad in Gaza, Palestinian Authority in Ramallah, Assad’s regime in Syria, and the Ayatollahs regime in Iran, who torture and murder teenagers, and religious and ethnic minorities with impunity, are ignored by MESA. It lays bare MESA’s anti-Israel bias. There was no MESA vote to boycott or sanction these countries and groups, nor any other oppressive regime anywhere, applying it only to the Jewish state that provides religious freedom, with civil and human rights for all of its citizens.

Another irony is that while MESA is turning away Israeli universities research institutions, Arab states have welcomed them with open arms. Bahrain, United Arab Emirates (UAE), Egypt, Morocco, and others are seeking to cooperate and learn from Israeli academic institutions. Conversely, MESA and many of its membership have chosen to be identified with intolerance and bias.

Attending a number of MESA conferences, this reporter (a graduate of Middle Eastern Studies) couldn’t help but sense the anti-Israel bias. Israel is essentially shoved into a corner while the focus is on the Arab world, and pandering to the Palestinian cause.

In MESA’s resolution to boycott Israeli institutions it cited, “restriction of movement for Palestinians,” but failed to mention Palestinian terror, and targeting Israeli Jews for murder. MESA didn’t mention the anti-Israel and anti-Jewish hatred embedded in Palestinian school curriculums and pervasive throughout the Palestinian educational system from kindergarten to university, nor the incitement to murder that follows. MESA charged that Israel is “attacking Palestinian educational institutions,” but didn’t reveal that these unnamed Palestinian institutions are hotbeds for Palestinian terrorists, and an armory for instruments of death, such as bombs, guns, and other devices. And, on rare occasions when Israeli personnel enter a Palestinian campus, it is strictly, and only as a counter-terrorism measure to seize arms and detain terrorists before they get a chance to kill.

MESA North America called on American colleges and universities to “uphold academic freedom on their campuses.” But, Arab and leftist groups, including Students for Justice in Palestine (SJP) and BDS Movement activists, regularly and violently disrupt pro-Israel speakers on campuses throughout America with impunity. MESA has never issued a resolution boycotting or censuring these organizations that have made a mockery of academic freedom.

MESA hypocrisy notwithstanding, its decision to boycott Israel didn’t arouse attention in Israel or elsewhere. MESA, like the other associations who succumbed to the anti-Israel hatred, long ago stopped being a gateway for Israeli academics. Israeli researchers are currently welcome in most Arab countries to the chagrin of the Palestinians and their supporters. In the UAE in particular, Israeli scholars and researchers are sought-after guests. The wider world is open to Israel, Israelis, and prominent research institutes worldwide promoting close cooperation with Israeli institutions, recognizing Israel’s academic excellence.

The professional and academic associations, as well as some of the mainline Protestant denominations calling for boycotting Israel, are usually staffed and controlled by anti-Israel activists who take advantage of the passivity of the majority of the membership, who tend to be apathetic toward politicking. In the case of MESA especially, two-thirds of its association’s membership did not participate in the vote, a clear expression of their disinterest in mixing academic research with a political agenda and action. In fact, many members cancelled their membership in MESA as a result.

Professor Eyal Zisser, of Tel Aviv University, Moshe Dayan Center for Middle Eastern and African Studies pointed out that, “Among the leading activists calling for the boycott of Israel are the fringes of the American Left, Arab-American researchers who have made hatred for Israel – not criticism – the lowest common denominator that unites them and gives them an identity. None of these people can agree on anything pertaining to the Arab world – the conflict between Sunnis and Shiites, between secularism and Islam, between dictatorships and democracy – hence Israel is the hatchet they use in search of their lost identity. Essentially, when they attack Israel what they mean is the United States, which they view as the source of all ills afflicting the Arab world. But because the American taxpayer funds their salaries, it’s convenient for them to turn their arrows at Israel.”

MESA’s boycott of Israel has only hurt its membership and its image as a fair-minded association. Israel’s scientific and technological advances have benefited and enriched humanity. This has been recognized by numerous governments, especially the US, where most states have legislated anti-boycott laws. MESA’s boycott of Israeli institutions is at best like a ‘dog…all bark but no bite.’