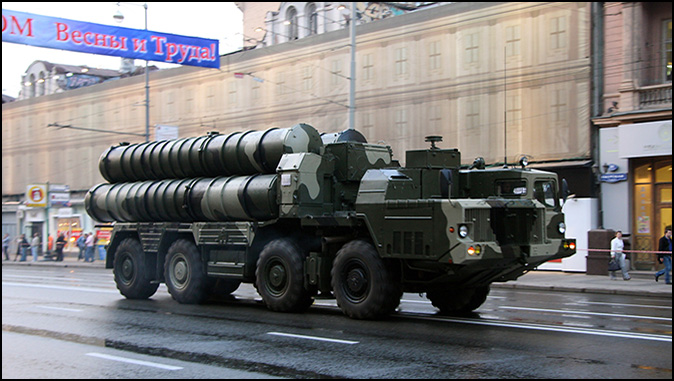 Israel has for long ruled the skies over Syria, thanks to its brilliant pilots, Syrian incompetence, and an informal understanding with the Russians, who have given anti-aircraft weapons to the Syrians, but done nothing themselves to prevent the IAF from attacking Iranian, Hezbollah, and Syrian sites. It was in order to ensure that that arrangement would remain in place that Israel was initially reluctant to forthrightly condemn Russia for its invasion of Ukraine. But it has since done so, on several occasions, and as we know from Russian Foreign Minister Sergei Lavrov’s angry denunciation of Israel – including his intolerable remark about Hitler’s supposed Jewish ancestry – the Russians are angry about Israel’s siding with Ukraine.

On May 15, the Israeli Air Force carried out a raid near Masyaf in northwestern Syria, where an important military site was completely obliterated. Just as the planes were leaving the area, Russians fired S-300 anti-aircraft missiles at the Israeli planes, but none were hit. Still, it was a new and worrisome development, a demonstration that Russia was no longer going to allow the IAF to bomb with impunity. What this means is reported on here: “In first, Russian military said to fire S-300 missiles at Israeli jets over Syria,” Times of Israel, May 17, 2022:

Russian forces opened fire on Israeli jets with advanced S-300 anti-aircraft missiles at the end of an alleged IAF attack on targets in northwestern Syria last week, Channel 13 news reported Monday, in what could signal a significant shift in Moscow’s attitude to Israel.

According to the unsourced report, the unprecedented incident occurred on Friday night, when the Israeli Air Force bombed several targets near the city of Masyaf in northwestern Syria.

At least five people were killed and seven were hurt in the airstrike, Syria’s state news agency said. Other media in the country said six were killed, all crew members of a Pantsir air defense system who attempted to take down the Israeli missiles.

Since 2017, there have been more than 1,200 Israeli airstrikes on targets in Syria. During all that time, the Syrians have managed to shoot down exactly two Israeli planes, both in 2018.

The report said the Syrian military fired off dozens of anti-aircraft missiles, which have been largely ineffective at halting the hundreds of Israeli strikes on Syria in recent years.

However, this time the S-300 batteries also opened fire as the jets were departing the area, Channel 12 said. The report noted that Syria’s S-300 batteries are operated by the Russian military and cannot be fired without their approval.

The report said that the S-300 radar did not manage to lock onto the Israeli jets and thus did not present a serious threat to the IAF fighter jets.

If confirmed, however, this would mark the first use of the S-300s against the IAF over Syria and would be a worrying development for Israel, which has carried out hundreds of airstrikes inside Syria in the course of the country’s civil war and since, targeting what it says are arms shipments bound for Lebanon’s Iran-backed Hezbollah terror group and other Iranian-linked sites.…

Why did the Russians wait until the Israel planes were leaving the area to shoot missiles at them? Were they deliberately trying not to bring down Israeli planes, but simply to send a message of singular displeasure over Israel’s siding with Ukraine? And are they hinting that the next time, the Russians won’t be.delivering a warning, but launching a real anti-aircraft attack with their S-300 missiles, meant to destroy Israeli planes and pilots?

If it is the latter, the Russians are badly miscalculating. Israel will not be dissuaded. Its pilots, the best in the world, will continue to destroy Iranian, Syrian, and Hezbollah bases as they deem necessary. The IAF will evade those S-300 missiles, which will only be a further embarrassment for the Russian military, already suffering mightily from its poor performance in Ukraine. Still worse for the Russians would be the Israeli response if one or more of its planes were to be brought down by an S-300 missile. In that case, the Israelis will not cease operations in Syrian skies, but instead will send punishing waves of Israeli aircraft to destroy the S-300 batteries that are known to exist in Syria. The Russian military doesn’t want to be put to that test; with good reason, it fears what Israeli pilots, planes, and missiles are capable of. It would be sensible for the Russians in Syria to steer clear of direct conflict with the IAF, as it has for years, lest it be shown up in a display of Israeli air superiority. After the Russian debacle in Ukraine, that kind of humiliation in Syria would be too much. The Russians are properly wary of tangling with Israel.

Without specifically mentioning the incident, Defense Minister Benny Gantz on Monday said Israel would not be deterred and vowed to prevent Iran from transferring “advanced capabilities” to other entities in Syria.…

Defense Minister Gantz was sending a message to several addresses, one of which was the Kremlin. Israel, he was making clear, will not “be deterred” by Russian S-300 missiles; it will continue to do whatever it takes to keep Iran from using its bases in Syria to transfer advanced weapons to Hezbollah.

Israel and its allies for years have lobbied Russia not to give Syria and other regional players the S-300 system, arguing that it would limit Israel’s ability to neutralize threats, including by Hezbollah.

Israel has now informed Moscow, through Defense Secretary Gantz’s veiled message, that it will not be deterred from bombing Iranian and Hezbollah sites in Syria. What is not said, and need not be, is what would happen if a Russian missile from an S-300 battery brought down an Israeli plane. The Russians know that Israel will do whatever it takes to eliminate any new threat to its bombing of Iranian sites in Syria, and will not be deterred. The Israelis have not hesitated to attack the Russians in the past; they brought down five Russian Migs, flown by Russian pilots, in Operation Rimon 20 in 1970, with no Israeli losses. Moscow has to be worried about Israel’s response to any further Russian launches of S-300 missiles in Syria. It very well may consider itself satisfied with that single S-300 missile it fired, which, launched only after the Israeli planes had left the area of their bombing, was likely meant only to warn Israel, not to destroy its planes. Having delivered that message, Russia can now go back to its previous position of leaving Israel’s planes over Syria alone. No need to tangle with IAF pilots and planes, where things might go as badly for the Russians as they did in Kharkiv.