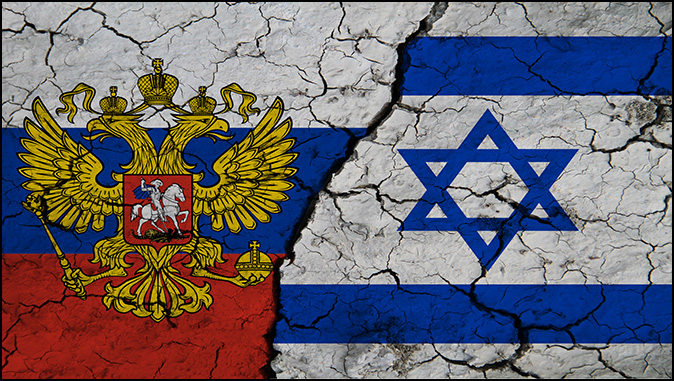 Russia vs. Israel…Tensions Rising
The core of the feud.
By Joseph Puder

Yair Lapid, assuming the role of interim Prime Minister of Israel until the general election due on November 1, 2022, has coincided with rising tension between Jerusalem and Moscow. Vladimir Putin, the Russian President, has deemed Lapid as pro-Ukraine and anti-Russian. While Lapid’s immediate predecessor, Naftali Bennett, was careful of not crossing the line of neutrality, Lapid, already as Foreign Minister, positioned himself as pro-Ukraine. Whether in response to western pressures for outright support for Kyiv, or to ingratiate himself to the Biden administration, Lapid has shown little diplomatic savviness in dealing with Russia. As a consequence, according to the Jerusalem Post (July 25, 2022), Moscow announced that the Jewish Agency and multiple other Russian-Jewish organizations have received warning letters from the Russian government. The Jewish Agency has received a letter from the Russian Justice Ministry that considered it a foreign agent, which might result in the agency being forced to close down.

Israel has remained one of the few western countries that did not impose sanctions on Russia, and has refrained from selling arms to Ukraine. Israel did however deliver medical and safety equipment to Ukraine. Lapid, as foreign minister, condemned Russia for its invasion of Ukraine, a step Bennett never took. Russia, for its part, rebuked Lapid for denouncing the Russian war crimes in Ukraine, and Israel voted to expel Russia from the UN Human Rights Council.

Tension between Russia and Israel arose earlier this year when Russian Foreign Minister Sergey Lavrov made an antisemitic statement, alleging the falsehood of “Hitler’s Jewish blood,” and blaming the Jews of being “the worst anti-Semites.” Israeli leaders expressed sheer outrage at Lavrov’s words. Lavrov’s foreign ministry did not stop at Lavrov’s insulting and antisemitic statements, issuing nasty statements such as “Israel supporting neo-Nazis in the Ukraine,” and claimed that Israeli mercenaries are fighting with the Ukrainian Azov Battalion.

It is clear that the regime in Russia considers Israel as part of the western camp and as a close ally of the US. Conversely, the Islamic Republic of Iran, Assad’s Syria, Palestinian Hamas and Lebanese Hezbollah are all anti-western. Iran’s Foreign Minister, Hossein Amir Abdollahian, in addressing the Ukraine crisis, blamed it on the West and the US, stated that the “crisis is rooted in NATO’s provocations.” Bashar Assad, the Syrian dictator, declared that Syria recognizes the independence of the two Russian-backed separatist regions in eastern Ukraine. That is enough for the current Kremlin leader to take the side of Israel’s enemies. Still, for Putin personally, Israel represents part of the Russian cultural sphere due to almost 1.5 million Russian speakers in the country. Geo-political concerns and political survival do however override cultural consideration for the likes of Vladimir Putin.

In a sense, Russia is playing the “good cop – bad cop” game. The Kremlin has reduced the dispute between Moscow and Jerusalem to a purely legal matter, while Lavrov’s Foreign Ministry accused Israel of longstanding “unconstructive and biased” behavior toward Moscow. These two conflicting messages coming out of Moscow have been made by Kremlin spokesman Dmitry Peskov, who told reporters that “The situation should not be politicized onto the entirety of Russian-Israeli relations. There are issues from the point of view of complying with Russian law.” One of Russia’s legitimate concerns is the fear of “brain drain.” Many Russian Jews are scientists and academics. But for Israel and Russian Jews, the right of Jews to immigrate to Israel, which the Jewish Agency facilitates, is a fundamental human rights issue. Russian Jews cannot be held hostage by the war in Ukraine, nor can Russian Jews be detached from their historical and emotional connection to Israel. This growing crisis has evoked memories of the Soviet era when Jews were barred from leaving the Soviet Union.

Clearly, Moscow is aiming their latest measures on the Jewish Agency, and possibly on Israeli Air Force flights over Syria as retaliation against Yair Lapid statements and his close identification with Kyiv. Russia did not consider retaliating against Israel during Netanyahu’s terms as prime minister, or for that matter, during the recent Naftali Bennett stint as prime minister.

The Times of Israel reported (7/26/2022) that Likud leader and former Prime Minister Benjamin Netanyahu accused Lapid of mismanaging Israel’s relationship with Russia. At a Tel Aviv press conference Netanyahu said, “For years, we have led a measured, balanced and responsible relationship with Russia, but there was currently a dangerous crisis and Prime Minister Yair Lapid and Defense Minister Benny Gantz were babbling and endangering our national security.” Netanyahu added, “I am worried that what we built over years is being undermined before our eyes in recent weeks.”

The apparent deteriorating relationship with Russia is of great concern to Israel, especially its impact on Israel’s security. Jerusalem is worried about Moscow’s possible actions to thwart Israeli attacks on Iranian shipments of lethal arms to Hezbollah in Lebanon over Syrian soil. Israeli fighter jets might be in danger of being shutdown on bombing missions against the Islamic Republic of Iran in Syria. Although it is doubtful that Russian pilots might challenge Israeli pilots over Syrian skies, Russia may deliver the S-400 mobile surface-to-air missile system, deemed a most effective air defense to Bashar Assad and/or the Iranians.

In December 2019, Israel revealed that it had an agreement with Russia not to sell arms to Ukraine and Georgia in exchange for Russia refraining from selling arms to Iran. Russia may now use Lapid’s tilt toward Ukraine as an excuse to sell arms to Iran. Another bone of contention between Moscow and Jerusalem has to do with Russia’s demand to be given control over the Alexander (Nevsky) Courtyard in eastern Jerusalem. On April 18, 2022, Putin wrote a letter to Bennett regarding the Alexander compound in Jerusalem, which Netanyahu had earlier agreed to transfer to Russia in exchange for freeing Naama Issachar from a Russian prison (on false drug charges). It appears that the alleged legal violation of Russian law by the Jewish Agency might simply be another pretext for the Kremlin to protest the Israeli High Court, annulling Netanyahu’s agreement with Putin.

Beyond the current disputes and tensions, there is significant cooperation between Russia and Israel in tourism. In 2015-2016, over 400,000 Russian tourists came to Israel. Russia and Israel have a visa-free agreement. There is also a significant Israeli community in Russia. The two countries have been engaged in scientific collaboration that includes space and nuclear technology, such as nuclear imaging and development of radioactive materials for dental treatment. Medical collaboration is yet another important area where Jerusalem and Moscow cooperate. Russia is Israel’s largest supplier of crude oil, while in April 2009, Israel sold Russia drones.

The Russian invasion into Ukraine, with the continued war and atrocities committed since February this year has unsettled the relationship between Israel and Russia. The sanctions imposed on Russia made it gravitate toward the likes of radical Iran and China, forming what might become the new “axis of evil.”

Israel is preparing a skilled team of jurists, and foreign policy experts to go to Moscow and settle the matter of the Jewish Agency operations in Russia. Hopefully, the team will be skillful enough to settle the disputes, easing the tension between the two countries. Russia and Israel could be productive partners on the regional scene.