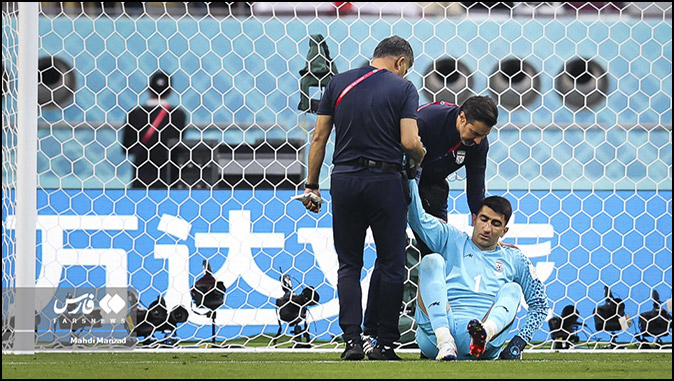 Qatar: Iranian Players and Fans Humiliate Tehran Regime at FIFA World Cup
Boos and jeers in the stands, silence on the field.
By Hugh Fitzgerald

The games in Qatar are not going well for the Iranian regime. It has been humiliated before the world, not because of Iran’s 6-2 loss in its match with England, but because of the Iranian team itself, whose members semaphored their distaste for the regime and solidarity with the protesters at home by refusing to sing the Iranian anthem.

Their impassive faces, their lips unmoving as the anthem was played, were seen by perhaps a billion people all over the world. And to make matters still more humiliating for the Iranian regime, Iranians in the stands jeered when the Iranian national anthem was played, and then roundly booed their own team when it was on the field, as a way to convey not any animus toward the Iranian team, but rather, as all the commentators have noted, their hatred for the regime in Tehran. Boos in the stands from Iranian fans and silence on the field from Iranian players both conveyed the same message of rage at the regime in Tehran. More on this display of disaffection by Iranian players and fans alike can be found here: “Iranian Soccer Fans Jeer National Anthem Prior to World Cup Clash With England in Qatar,” by Ben Cohen, Algemeiner, November 22, 2022:

In unprecedented scenes at the World Cup in Qatar, Iranian fans loudly jeered their country’s national anthem as the national team stood grim-faced on the pitch prior to their opening clash against England on Monday.

Video posted by journalists covering the flagship soccer tournament showed fans booing and shouting over the anthem as it was played over the PA at the Khalifa International Stadium. Several fans were seen making thumbs-down gestures. A number carried signs in the colors of the Iranian flag or wore T-shirts that proclaimed “Women, Life, Freedom” — the main slogan of the historic protests currently rocking the Islamic Republic.

The Iranian players meanwhile stood still, wearing stony facial expressions and pointedly not singing the anthem. In a pre-match press conference, the team’s captain, Ehsan Hajsafi, explicitly references the protests at home. “We have to accept that the situation in our country is not good and that our people are not happy, they are discontent,” Hajsafi said. “We are here, but it does not mean we should not be their voice or that we should not respect them. Whatever we have is theirs.”

England went on to rout Iran 6-2, in a match that resulted in 14 minutes of stoppage time after Iranian goalkeeper Majid Hosseini was carried off the field with concussion. In a measure of the ferocity of the anti-regime protests currently convulsing Iran, social media accounts posted cellphone videos of Iranians watching the match on television and delightedly cheering an England goal.

The Iranians — both those in the stands in Qatar and those watching from their homes in Iran – were the only people in the world cheering when their own country’s team missed making a goal, or when the opposing team – England — made one.

Some Iranian fans who carried protest signs said they were denied entry to the stadium by Qatari officials, the New York Times reported. Qatar had already come in for criticism for allegedly caving to Iranian demands after the media credentials of Iran International TV, a London-based anti-regime broadcaster, were canceled on the eve of the competition.

Qatar did what it could to limit Iranian anti-regime demonstrations. It prevented Iranians carrying protest signs from entering the stadium where Iran’s match with England was to be held. It cancelled the media credentials of Iran International TV, an anti-regime broadcaster based in London. But none of that has prevented the station from covering, at a distance, both the silence of the Iranian players and the booing of Iran’s national team by Iranian fans in the stadium. And the world media has given tremendous coverage both to the Iranian players who remained silent during the playing of Iran’s national anthem, and to the Iranian fans who, by booing the Iranian team were, in their different ways, telling the world how much they hated the regime in Tehran.

Official Iranian media outlets notably avoided the prominent display of their team’s humiliating defeat — the only occasion since a 6-1 loss to Turkey in 1950 that Iran has conceded six goals. In a tweet that followed the final whistle, the Israeli Foreign Ministry’s Persian-language Twitter feed observed simply, “[T]he defeat of the Islamic Republic.”

Monday’s game was already shrouded in controversy after FIFA, international soccer’s governing body, suddenly reneged on an earlier commitment to allow team captains to wear “One Love” armbands promoting the basic rights of the LGBTQ+ community. Under Qatar’s penal code, homosexuality is prohibited and members of the LGBTQ+ community are subjected to hefty prison terms and even, in the case of Muslims, the death penalty.

On Monday, FIFA informed participating teams that players who wore the armband would face disciplinary sanctions, including possible ejection from the pitch. A statement from seven national football associations protesting the decision stated: “We were prepared to pay fines that would normally apply to breaches of kit regulations and had a strong commitment to wearing the armband. However, we cannot put our players in the situation where they might be booked, or even forced to leave the field of play.”

FIFA was prepared to do whatever Qatar wanted – after all, it has received nearly half a billion dollars from the 2022 host of the World Cup games – and Qatar wanted to prevent players from wearing armbands that conveyed a message of support for LGBT people, and served as a protest against Qatari laws that outlaw, and severely punish, homosexual activity. FIFA dutifully informed the teams that had been planning on taking part that any players wearing the armband would be severely disciplined, even including possibly being banned from the games. That threat was enough to end the “armband protest.”

The coverage of the World Cup games naturally focused on the sensational. And the most sensational events – aside, so far, from the surprise Saudi victory over Argentina, which deserves investigation – have to do with Iran, its players on the field, and Iranians in the stands. A billion people around the world, glued to their sets, saw Iranian players refusing to sing their national anthem, and Iranian fans rooting against their own country’s team – the clearest display yet, on the international scene, of the tremendous popular rage against the regime that, in Tehran, is now on the defensive, holding on by dint of the live fire it uses to suppress nonviolent civilians. It manages to hold onto power still, but for how long?

One last question many will be asking: will the Iranian soccer team return to Tehran, where it will have to face the regime’s savage punishments, possibly including death, for their “treason” in Doha? The Iranian regime has already executed athletes whom it has considered as being enemies of the regime, such as the champion wrestler Navid Afkari, who took part in the 2018 anti-regime demonstrations and was later falsely accused of killing a security guard. Would the Iranian regime dare to imprison all twelve members of the team for the “crime” of not singing the national anthem while in Qatar? Or would it be afraid to impose such harsh measures now, given the widespread revolt inside Iran, and instead settle on a much milder punishment – say, a year or two in prison?

And there are other possibilities. What if all twelve members together requested asylum in a European country, possibly England, where Iran International is located, or in the Great Satan itself, the United States? What a blow that would be to Iran’s standing. Would Qatar, under tremendous pressure from Iran, prevent them from leaving for London or Washington, or insist that they be sent back, by force if necessary, to Tehran? Things will go hard with Qatar, in both the media and the social media, if it decides to forcibly send those Iranian players back to Iran, where they will face punishments they do not deserve, including long prison terms and even execution.

Within a few weeks, just after the World Cup games end on December 18, we should know what the Iranian players, individually or as a group, will have decided – whether to return to whatever may await them at the hands of a vindictive, cruel, and fanatical regime, or to instead find refuge in a Western country, where, if they choose, they can continue the protest they began when they refused to sing in the stadium in Doha the anthem of the hated regime. And then we will see, too, to what degree Qatar is Iran’s puppet, by possibly preventing those players from choosing freedom. Whatever those players choose — or are forced — to do, the effect on Iran’s image in the world will be tremendous.