Prayers at the Western Wall
By Daymond Duck

Christians believe that prayer is one of the greatest privileges we have.

We believe that earnest prayer in Jesus’ name acknowledges the existence of God, that He actually hears every prayer, that He is all-powerful, and that prayers of faith can move Him to change things. 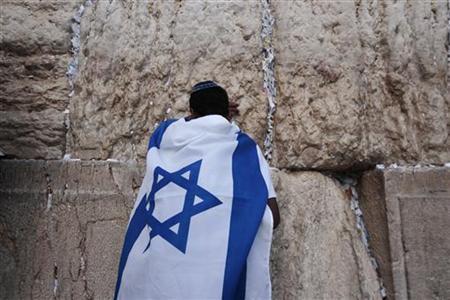 But unlike some that believe they have to pray at certain times of the day, or in certain positions, or facing a certain direction, Christians believe we can pray anytime, in any position and facing any direction.

So Christians can pray anytime and anywhere; and it is a great privilege that our loving sovereign God has given to all of His people.

Having said this, at least periodically, some people like to go to Churches, shrines, or significant designated holy places to pray.

In fact, every year several million people visit the Wailing Wall in Israel to pray. God said His heart and eyes are always there so some Christians believe His divine presence is there in a special way and they want to go there to feel it and to pray.

But many people do more than stand in front of a wall weeping and praying. Since the 1700s, Christians and Jews have been writing prayers on pieces of paper, folding the paper and sticking it in cracks between the blocks of the wall.

Hillary Clinton visited the Wailing Wall in 2002 and again in 2005. On both occasions, she stuck a piece of paper in a crack, but she never revealed what she wrote on them. There is nothing wrong with that. Prayers can be private or public. She kept her prayers private.

As a candidate for president of the U.S., Barack Obama visited the Wailing Wall in 2008. He stuck a piece of paper in a crack that was later removed by a seminary student and sold to a newspaper that published it.

Mr. Obama’s prayer was “Lord, protect my family and me. Forgive me my sins and help me guard against pride and despair. Give me the wisdom to do what is right and just. And make me an instrument of your will.”

The newspaper that published his prayer received a lot of criticism for violating Mr. Obama’s privacy. Since then, others have complained that his prayer was mostly selfish because he mentioned “me” five times. They believe he should have prayed for people other than himself and family, and that he should have prayed for peace on earth, asked God to bless the U.S. or whatever.

Now, Donald Trump is U.S. president -elect. As far as this writer knows he hasn’t yet visited the Wailing Wall., but he sent one of his advisors, David Faiman, to Israel with a prayer and instructions to place it in a crack in the Wailing Wall.

Mr. Trump reportedly wrote the prayer with the help of his Jewish daughter, Ivanka. It reads, “May you bless the United States, our armed forces and our allies. May your guiding hand protect and strengthen our great nation.”

Notice that Trump did not ask for anything for himself. He asked God to bless our nation, our military and our allies (Israel and others), and to protect and strengthen America.

The election is now behind us and it would be good to pray for the winner, and for all the things mentioned in Mr. Trump’s prayer.

And remember that God will bless those that bless Israel.

Metal Detectors and Palestinian Lies By Bassam Tawil Originally Published by the Gatestone Institute. The…

Toward A True US-Israel Partnership

Toward A True US-Israel Partnership What Israel can do to help rebuild the alliance. By…

In This Round of Reconciliation Talks, Hamas is the Great Victor

In This Round of Reconciliation Talks, Hamas is the Great Victor Fatah's surrender to Hamas.…