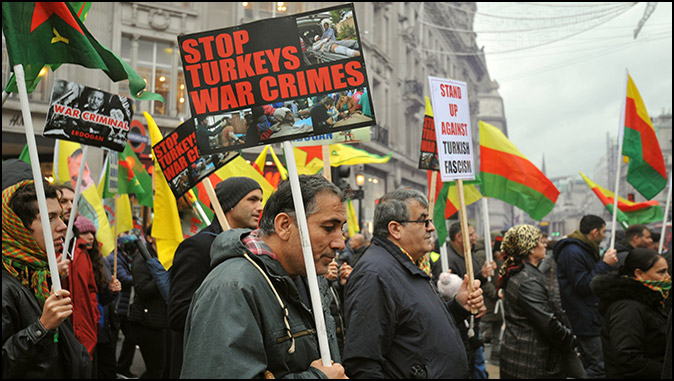 According to Kurdistan 24 Network (9/8/2022), the Palestinian-Arab foundation Wafaa Al-Mohsenin has delivered funds for housing units for Arabs from throughout Syria in Jindires, which is part of the Afrin district in northwestern Syria, while displacing the native Kurds who were the majority group in the region for centuries. The donations to settle Arabs in the Afrin area are coming from the Palestinian residents of the Al-Zaeen village, east of Jerusalem. As a result of the January 2018 Turkish offensive codenamed “Operation Olive Branch” offensive, over 300,000 native Kurds fled as reported by MedyaNews. Now under Recep Tayyip Erdogan’s guidance the Afrin enclave is being Arabized while the Kurds are being ethnically cleansed.

In January 2018, Turkey launched an air and ground campaign targeting Afrin, a Kurdish-controlled enclave in northwestern Syria. Turkey announced at that time that it wanted to create a 30-kilometer deep “secure zone” in Afrin. The Turkish operation was aimed essentially to oust the Kurdish People’s Protection Units or YPG from Afrin. YPG had controlled the area, and served as a reliable and effective US ally in combating the Islamic State.

Erdogan, the authoritarian president of Turkey, Islamist and Muslim Brotherhood champion, sought to remove the Kurds from the Afrin region, which is situated next to the Turkish border. Erdogan was trying all along to prevent the Kurds from establishing an autonomous region in Syria similar to the Kurdish Regional Government (KRG) in Iraq. His greater fear has been that a Kurdish autonomous or independent region in Syria might incentivize Kurds in Turkey’s southeast (20% of Turkey’s 85 million population are Kurds) to demand autonomy, or worse yet, joining their brethren in Iraq, and Syria (there are also about 8.8 million oppressed Kurds in Iran or 10% of Iran’s population of 88 million) and form a whole Kurdish nation.

Turkey has been fighting the Kurdistan Workers Party known as the PKK since the 1980’s. Both Turkey and the US consider the PKK a terrorist organization. Originally, the PKK sought independence for the Kurds in Turkey and employed terror to achieve it. In the mid-1990’s however, the PKK switched its demands from independence to Kurdish autonomous rights in Turkey. The Kurdish militia in northern Syria, the Kurdish People’s Protection Units, has been seeking an autonomous status for the Kurds in Syria, much like the PKK in Turkey but without employing terror against Turkey.

Turkey’s ostensible excuse for invading Syria’s sovereign territory was allegedly to create both a “security buffer” and a “humanitarian zone” for Internally Displaced Persons (IDP) from all parts of Syria as well as for those residing in Turkish territory. Turkish occupation turned the regions of Afrin and others under its control into a patchwork of fiefdoms where human rights abuses have become commonplace.

Turkey’s October 2019 offensive against the Kurdish-led Syrian Democratic Forces (SDF) focused this time on the core Kurdish region of northeastern Syria. Erdogan’s excuse for the invasion was “to destroy the terror corridor,” that he alleged Kurdish forces were trying to establish on Turkey’s southern border. The reality is, however, the Turkish military campaign, which included airstrikes has put the Kurdish civilian population at great risk. SDF officials warned that the Turkish onslaught created a humanitarian crisis.

Turkey’s primary Syrian proxy – the Syrian National Army (SNA) established in 2017, is comprised mainly of Turkmen and Arabs. It grew however into a kaleidoscope of militias, including former Free Syrian Army (FSA) members as well as some Sunni Muslim extremist groups. Turkey set up a joint command for these opposition militias, not merely on a military level, but in order to handle the newly-settled territories captured by Turkey and its proxies in the aftermath of its intervention in Syria. The SNA affiliated militias participated in Turkey’s 2016, 2018, and 2019 military operations in Syria, and controlled areas in the north and west of Syria.

The Kurds managed to establish a semi-autonomous region in northeastern Syria known as Rojava. It gave hope to the long persecuted Kurdish minority of about 40 million in the region, principally in Iran, Iraq, Syria, and Turkey. Unlike the neighboring states, Rojava’s democratic experiment included diversity and women’s rights. All that occurred while the regime of Syria’s dictator, and butcher Bashar al-Assad sought to reclaim the territories he lost during the civil war that began on March 15, 2011. Assad has been heavily aided by Russia and Iran, who used air power and Iranian militias including the Lebanese Hezbollah to inflict tremendous loss of life and property on the Syrian people. At the same time, the Kurds had to struggle against the Islamic State menace. The Islamic State set up their capital in Raqqa, close to the core Kurdish province of al-Hasakah in northeastern Syria. Aided by American air power and US Special Forces, Kurdish fighters were able to remove the Islamic State jihadists from a third of Syria’s territories but at a significant cost in Kurdish lives – 11,000 dead.

In October 2019, President Donald Trump kept his campaign promise to withdraw the US from “endless wars in the Middle East.” It meant abandoning the Kurdish fighters who partnered with the US in the fight against the Islamic State, to the mercies of Erdogan’s brutal war against the Kurds. Staunch Republican supporters of President Trump disagreed with his decision. House Minority Leader, Kevin McCarthy (R-CA) said: “I want to make sure we kept our word for those who fought with us, if we make a commitment and somebody is fighting with you, America should keep its word.” Nikki Haley, US ambassador to the UN at that time quipped, “The US must always have the back of our allies, if we expect them to have our back…Leaving them to die is a big mistake.” US Senator Lindsey Graham (R-SC) charged that, “If Turkey attacked the Kurds NATO should suspend their membership.”

Erdogan’s Turkey did attack the Kurds as described earlier, and created a humanitarian crisis in northern Syria. One cannot escape Erdogan’s hypocrisy, or his cynicism. He has repeatedly condemned Israel for allegedly mistreating the Palestinian-Arabs and Hamas in particular. Israel has acted in self-defense against Hamas (the Palestinian branch of the Muslim Brotherhood) terror targeting Israeli civilians. Conversely, Erdogan attacked the Kurds without the latter’s provocation, and crossed the boundaries of a sovereign state.

The Palestinians have similarly displayed their hypocrisy, claiming victimhood repeatedly, and falsely charging Israel with ethnic cleansing, or of Judaizing Jerusalem. Yet they, along with Erdogan are actively supporting the ethnic cleansing of Kurds in the Afrin enclave, and elsewhere in northern Syria.