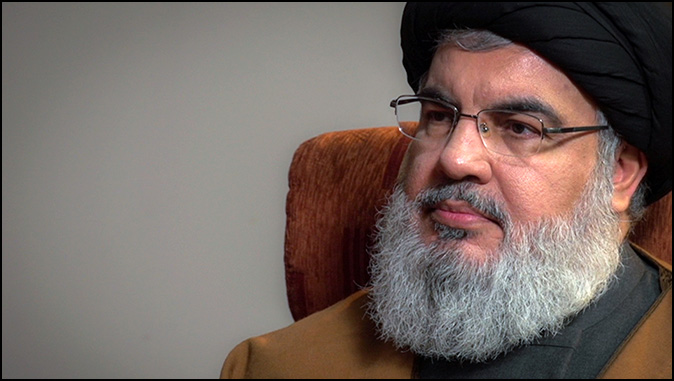 Nasrallah Once Again Provoking War With Israel
What a ruined Lebanon will mean.
By Joseph Puder

Hassan Nasrallah, the chief of the terrorist Lebanese Hezbollah organization is at it again, seeking to challenge Israel to a fight. He is repeating the same bravado as he did in 2006, which led to the Second Lebanon War. In 2006, Nasrallah underestimated Israel’s response to his provocations. In a cross-border raid on July 12, 2006, Hezbollah terrorists lobbed an anti-tank missile at two armored Israeli Humvees patrolling the Israeli side of the border fence. The ambush left three Israeli soldiers dead. Two Israeli soldiers: Ehud Goldwasser and Eldad Regev were taken prisoners, and ultimately murdered.

In July 2022, Nasrallah warned that Israel and foreign companies would not be allowed to start drilling at the Karish gas field unless Israel agreed on a maritime border with Lebanon. In addition, he warned that if Israel began production, it would escalate into a conflict as early as September, and he did not rule out the possibility of a full-scale war with Israel. Earlier in July, Hezbollah unleashed two drones targeting the Karish gas field; they were downed by Israeli Navy and Air Force units.

In the meantime, US official Amos Hochstein, mediating the maritime border dispute between Lebanon and Israel, was in Beirut last week. He expressed optimism about making progress toward a deal. He met with top Lebanese officials, but apparently not with Nasrallah. Hochstein said that he “remains optimistic that we can make continuous progress as we have over the last several weeks and I look forward to being able to come back to the region to make the final arrangements in a few weeks.”

With Al-Mayadeen TV being a pro-Hezbollah mouthpiece, it is not surprising that the channel has already concluded that an agreement has been reached, which is not the case. It reveals however, Nasrallah’s desperate effort to show the Lebanese people that his threats forced Israel’s hand. Mounting criticism of Hezbollah by the Lebanese people, including some Shiites, forced Nasrallah to play the “Lebanese patriot” card. Unfortunately for the Lebanese people, Hezbollah’s way of resolving the desperate economic and political problems that are destroying the Land of the Cedars is by Nasrallah leading the bankrupt and poverty stricken country into an apparent war with Israel. Simply put, it amounts to diversionary tactic.

The Lebanese people want bread and food on their dining table, and fuel for their cars. They want functioning health services and mail, garbage pickup, and an end to the endemic corruption by the leaders of the nation. Perhaps Nasrallah forgot the destruction to Lebanon wrought by Hezbollah in the 2006 war with Israel. The people though, have not forgotten, but they are helpless in the face of an “armed to the teeth Hezbollah.”

In 2006, Nasrallah threatened war if Israel wouldn’t accede to his demands that it release the arch-terrorist Samir Kuntar from prison in Israel, and return the Shab’a farm to Lebanon. Now he demands that the maritime border isn’t to be resolved by compromise but rather by his idea of where the border should be. Actually, the maritime border dispute between Israel and Lebanon could be easily be resolved in negotiations that have been carried out by American negotiator Amos Hochstein. An agreement would enable Lebanon to use the natural gas reserves off its coast, and bring billions of dollars in revenue to its empty coffers. Regrettably, as my Lebanese friend Joseph Hakim pointed out, the revenue from the gas drilling will be pocketed by Lebanon’s corrupt politicians.

Nasrallah’s threats must be taken seriously. He has nothing to lose at this point; he has reached the pinnacle of power in Lebanon, and it has coincided with Lebanon’s economy crashing and endless political crisis unknown in this country for many years. The August 2020 catastrophic explosion in the Beirut port that killed hundreds of people, and destroyed neighborhoods is still an open wound for most Lebanese. It has eroded Nasrallah’s leadership within Hezbollah and the organizations legitimacy in Lebanon. But, while Hezbollah is still the most potent military power in Lebanon, Nasrallah still speaks for Lebanon.

Hezbollah’s eroding popular legitimacy is a result of both its foreign adventures and its complicity with the failure of domestic governance. In recent years, more Lebanese Shiites noticed and disapproved of the ostentatious wealth of Hezbollah’s second-generation party members and their families: their high-end apartments, luxury cars and SUV’s, designer clothing, and top-of-the-line cell phones. These overt manifestations of wealth conflict with Hezbollah’s original ethos of humility, austerity, and selflessness. It contradicts Nasrallah’s assertion that the terror organization’s fighters did not go to war in order to achieve material advantage…

The current US administration could do much to put some sense into Lebanese politicians by warning them that Nasrallah’s playing with fire will end up turning Lebanon into a leper-state, much like Russia and Syria. The problem with the US administration is that they still believe that Lebanon and Hezbollah are separate units. Perhaps figures within Hezbollah, or Nasrallah’s Christian ally, President (of Lebanon) Michel Aoun, and his Free Patriotic Movement could restrain Nasrallah’s adventurism, but that didn’t happen in the past, and it is unlikely to happen now.

Although Israel would rather settle the maritime border with Lebanon diplomatically through negotiations, it cannot give in to Nasrallah’s provocations. Israel must be prepared for war while it is doing its utmost to bridge the differences with Beirut. This time, unlike the failures in the 2006 war, the Israel Defense Forces (IDF) Ground Forces must be adequately trained to fight on the Lebanese terrain and be sufficiently supplied. The Ground Forces, Navy, and Air Force must be fully coordinated.

The outcome of such a war, if it is to occur, will be costly to Israel, albeit, not catastrophic. For Lebanon, on the other hand, it would be devastating. Hezbollah might target its missiles on Tel Aviv and claim victory, but a ruined Lebanon will be the final straw for the Lebanese people. Hezbollah will pay the price for the war it provoked and initiated, and its reign in Lebanon will come to an end.