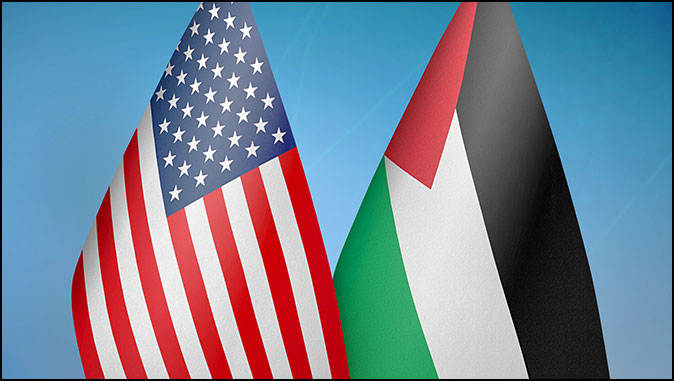 Joe Biden will be visiting the Middle East this July, but what he hopes this will accomplish — other than allowing him to be seen to be doing something about the Middle East other than appeasing Iran in Vienna – is unclear. He will no doubt be repeating the Bidenites’ new mantra, that both Israelis and Palestinians “deserve equal measures of freedom, security & prosperity.” By way of preparing the ground for Biden’s visit, an American delegation met with Mahmoud Abbas on June 11. A report on the meeting is here: “Palestinian Authority President Hosts US Delegation in Ramallah,” Algemeiner, June 12, 2022:

Palestinian Authority president Mahmoud Abbas hosted Saturday a US delegation led by Assistant Secretary of State for Near Eastern Affairs Barbara Leaf, ahead of an expected visit of US President Joe Biden.

Abbas reiterated his requests to remove the Palestine Liberation Organization (PLO) from the US list of terrorist entities during the meeting, his office said.

The PLO is not only a terrorist entity, but the earliest of Palestinian terror groups, spreading murder and mayhem ever since its founding in 1964, years before the PFLP (1967), Hamas (1987), and the Palestinian Islamic Jihad (1987) existed. The fact that the PLO has in recent decades been overshadowed by other terror groups, especially Hamas, does not mean that it has forsworn terrorism as a tactic, but only that it has been less active than other groups. It was morally intolerable that the PLO was ever allowed to open a Washington office, in the naïve aftermath of the Oslo Accords, when Washington was prepared to believe the assurances of the PLO’s leader, Yasir Arafat, that the organization now abjured terrorism. It was, like every other statement by Arafat, a lie. The PLO continued to praise and promote terrorist attacks; right up to the present, it has never denounced any of them. Yet in his insensate desire to appease the Palestinians, Joe Biden promised, as a presidential candidate, to reopen the PLO office in Washington that Trump had closed in 2017.

He has yet to act on that promise; perhaps in the end some glimmer of moral sense will prevent him from such folly. He might at least demand the obvious quid pro quo from the PA, which is Abbas’ ending his own support for terrorism, by shutting down his Pay-For-Slay program, that provides generous lifetime stipends to imprisoned terrorists, and to the families of terrorists killed while committing terrorist acts. This program rewards past, and incentivizes future, acts of terrorism. The Taylor Force Act, passed by Congress in 2018, was intended to withhold American aid to the PA as long as “Pay-For-Slay” was in force. It has been ignored by the Biden Administration, which claims that the aid it gives to the PA is “humanitarian” in nature and therefore not covered by Taylor Force; this is flatly untrue. Any American money given to the PA, even if labelled as “humanitarian” aid, simply frees up other money that the PA then uses for its “Pay-For-Slay” program; money is fungible, and morality is not the Bidenites’ strong suit.

The Palestinian president also requested that the PLO’s office in Washington and the American consulate for east Jerusalem be reopened after both were closed under the Trump administration, the PA presidency said in a statement.

Mahmoud Abbas keeps asking that the “consulate to the Palestinians” in Jerusalem, that was closed in 2018, be reopened. Instead of humoring him, the Bidenites ought to make clear that his request cannot be granted. The Vienna Convention on Consular Relations (1963) makes clear that a consulate can be opened in a “receiving state” only with the consent of that state. Prime Minister Bennett and Foreign Minister Lapid have both made clear that they have no intention of allowing such a consulate to be reopened in Jerusalem, which would only strengthen the PA’s claim on having its future capital in the city.

Leaf, who began a three-day trip to the Palestinian territories and Israel on Saturday, met Abbas “to discuss the US-Palestinian relationship, US assistance to Palestinians, deepening ties and how Palestinians and Israelis alike deserve equal measures of freedom, security & prosperity,” the State Department said.

This mantra – “Palestinians and Israelis alike deserve equal measures of freedom, security & prosperity” – is absurd. How can the Palestinians, who have never known anything but despotism from Hamas in Gaza and from the PA in the West Bank, who have been ruled only by the massively corrupt and the incompetent, ever be expected to have an “equal measure of freedom, security, and prosperity” as Israelis enjoy in one of the most advanced democratic states in the Western world? How exactly will that “equal measure of freedom” be possible, when not a single one of the 22 Arab states – monarchies and despotisms and a handful of pseudo-democracies – offers such freedom as Israelis possess? How can the Palestinians enjoy the “equal prosperity” that the well-educated and endlessly innovative Israelis have managed to create for themselves? This State Department wish is akin to insisting that people in the Democratic Republic of Congo deserve “equal measures of freedom, security, and prosperity” as those in France or Great Britain.

Biden has pledged to reopen the consulate, closed under Donald Trump, whose administration recognized Jerusalem as Israel’s capital, infuriating the Palestinians who see its eastern sector as their future capital.

Israel opposes the Palestinian consulate in Jerusalem, saying the US should open this diplomatic mission in Ramallah, the seat of the Palestinian Authority in the West Bank.

This sleight-of-word is meant to make acceptable the reopening of what will be in fact a “consulate to the Palestinians,” while avoiding labelling it as such, in the hope that this will not, therefore, need the approval of the Israeli government. The Israelis could object to this unseemly legerdemain, but more likely, they will let it go, preferring to expend their political capital in Washington on stopping Iran’s nuclear program.

The unit [Office of Palestinian Affairs] “operates under the auspices of the US Embassy in Jerusalem, and reports on substantive matters directly to the State Department, an OPA spokesperson said, noting the new structuring was “to strengthen our diplomatic reporting and public diplomacy engagement.”

The move comes ahead of a possible visit by Biden to the region, as the US president said he was considering a trip to Saudi Arabia, Israel and the Palestinian territories in July.

Did no one in the American delegation think it possible to raise with Mahmoud Abbas the issue of the PA’s insistence on keeping its “Pay-For-Slay” program? Couldn’t he have been warned that Congress has become increasingly disturbed with his unyielding support for the program, and that he may find the American aid he counts on will be slashed if his support continues? Couldn’t he have been read the riot act, instead of being appeased, and been reminded that there are many in Congress who believe the Bidenites are violating the Taylor Force Act in spirit and in letter?

Similarly, couldn’t Abbas have been told that he has to stop its practice of naming streets, plazas, parks, and sports competitions after terrorists? For this, too, like “Pay-For-Slay,” encourages young Palestinians to go and do likewise, a way to attain “honor” in Palestinian society?