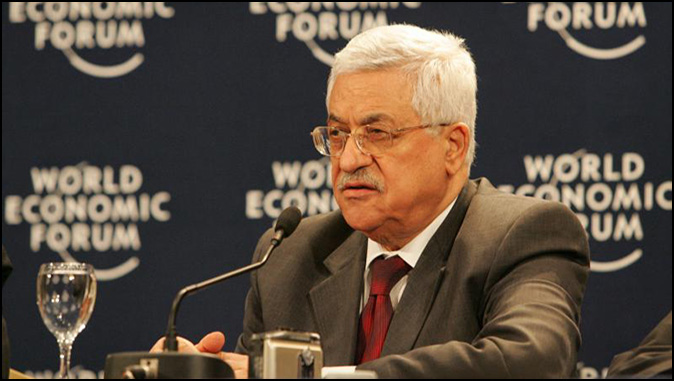 Mahmoud Abbas: Eternal Political Terrorist?
Will the PA’s 87-year-old president ever settle for a two-state solution?
By Joseph Puder

A debate among Israel’s coalition partners was taking place last week on whether Mahmoud Abbas (Abu Mazen), President of the Palestinian Authority (PA), is a “partner for peace” or a “political terrorist.” The debate is essentially between the Israeli political Left and Right. Finance Minister Avigdor Lieberman, leader of the rightist ‘Israel Our Home’ party has argued that Abbas “is using every opportunity to incite against the Israeli government.” On the flip side, Israel’s Health Minister, Nizan Horowitz, leader of the leftist Meretz party, considers Abbas a “peace partner.”

During the memorial service for the Israeli Prime Minister Yitzhak Rabin last October (Hebrew calendar), Horowitz criticized both Prime Minister Naftali Bennett and Foreign Minister Yair Lapid, for not meeting with Mahmoud Abbas. Horowitz said, “We need to finish his work (meaning Rabin’s) and bring about two states…there is a partner, and whoever doesn’t talk to him strengthens Hamas.”

In an apparent criticism of Lapid and Defense Minister Benny Gantz, Lieberman pointed out at a faction meeting of his party that, “He (Mahmoud Abbas) must not be legitimized…He can’t be a partner for anything. He is a terrorist just like the rest of the terrorists. He just deals in political terror, which is sometimes even more dangerous and harmful than conventional terror.”

The discord among Israel’s coalition partners was aggravated by the accidental killing last week of Al Jazeera reporter Shireen Abu Akleh, during clashes in the northern Samaria city of Jenin, known as the terror capital of the West Bank. Israel Defense Forces (IDF) troops were in Jenin’s refugee camp to apprehend terrorists involved in the recent murders of 19 Israeli civilians, policemen, and women.

Abbas has categorically refused to cooperate with Israeli authorities on a joint investigation pertaining to the death of Abu Akleh. Abbas used the opportunity of Abu Akleh’s unfortunate death to score anti-Israel points in the international arena. He blamed Israel for the killing of Abu Akleh. It sounds like a repeat of the “2002 Jenin massacre hoax,” perpetrated by the Palestinians and their helpers in the western media. Such premature accusations were meant to smear the Jewish state before the facts have been fully revealed.

Abbas asserted last Thursday that Israeli authorities were “fully responsible” for the killing of Abu Akleh. He said, “We hold the Israeli occupation authorities fully responsible for killing her.” He continued, “They cannot hide the truth with this crime. are the ones who committed the crime, and because we don’t trust them, we will immediately go to the international Criminal Court.”

PM Naftali Bennett responded to Abbas’ charges, denying Israel access to basic findings required to get to the truth. He urged the PA not to take “any steps to disrupt the investigation or to contaminate the investigation process.” Soon after the regrettable death of Abu Akleh, Israel asked the PA to provide the bullet that hit the Palestinian journalist for a joint ballistic examination. The PA refused.

The same Abbas who doesn’t trust Israel and blamed the “occupation authorities,” refused to end the Palestinian conflict with Israel and secure a Palestinian state for his people in 2008. Israeli PM Ehud Olmert offered Abbas the most generous peace deal ever, that would have ended the so-called “occupation” or Israel’s necessity to enter Jenin.

As President of the PA, Abbas has taken hostile actions against Israel all along. He boycotted talks with Israel throughout the Bush, Obama, and Trump administrations. Abbas never attempted to take tangible steps toward peace, bypassing and evading bilateral negotiations with Israel. At the same time, he has incessantly repeated the longstanding irredentist demands of the Palestinian Liberation Organization (PLO).

In 2011, while agreeing to reconcile with Hamas, an internationally recognized terrorist organization, Abbas vowed never to negotiate with Israel. In September 2011, Abbas deliberately bypassed negotiations with Israel, and officially requested that the UN recognize the independence of a unilaterally declared Palestinian state.

At the 76th session of the UN General Assembly, on September 24, 2021, Abbas’ speech opened with invoking the “Nakba,” which means in essence, “catastrophe,” referring to the establishment of the Jewish state in 1948, which he held responsible for the Palestinian plight and the refugee problem. Abbas stated, “This year marks the 73rd anniversary of the Nakba.” He warned that the current and former Israeli governments “have persisted in evading the two-state solution based on international law and UN resolution.” Lying with impunity, Abbas continued, “We have extended our hands time and time again for peace and still cannot find a partner in Israel … the leaders of Israel no longer feel any shame while stating their blunt opposition to this solution which is supported by global consensus.”

A year earlier, in January 2020, US President Donald Trump presented his Middle East peace plan, which proposed a realistic two-state solution. Israel fully embraced it; the Arab Gulf states supported it enthusiastically, while Abbas rejected it, calling it a “conspiracy deal.” Abbas shunned the Trump plan even before it was presented, and refused to join the peace talks. The Trump “Deal of the Century” would have pumped over $50 billion of investment dollars into the future Palestinian state, and made eastern Jerusalem the Palestinian capital, as well as create a contiguous state.

Mahmoud Abbas used the death of Shireen Abu Akleh as a cudgel against Israel with the compliance of the international media, while at the same time inciting fellow Palestinians against Israel. This is not the ways of a peacemaker.

Nizan Horowitz was delusional when in a meeting with Abbas in Ramallah last year he declared, “We have a common mission: to maintain hope for peace, based on the two-state solution. Tonight in Ramallah, with the President of the Palestinian Authority, we took another step to deepen cooperation with our closest and most important neighbors.” Horowitz’s statement smacks of the same wishful thinking British PM Chamberlain expressed after meeting Hitler in Munich, claiming to bring “Peace for our time.”

Mahmoud Abbas has had multiple opportunities to consummate the two-state solution. Instead, he used every possible excuse. To resume talks with Israel he demanded release of Palestinian prisoners. When Israel complied, that was not enough. And when PM Olmert offered to admit into Israel 5,000 Palestinian refugees, it was not enough either.

At this point, it is clear that the 87 year-old Abbas will never settle for a two-state solution, end to the conflict, and agree to a genuine peace with Israel. Israel must therefore look for a peace partner among the younger Palestinian generation, who unlike Abbas, would carry legitimacy and have courage to say yes to peace. To date, no such figure has surfaced.