Let’s all go to the Arafat Museum
The best way to remember the terrorist is by exposing his lies.
November 10, 2016
By Daniel Greenfield

On the anniversary of his death, it is important that we remember Yasser Arafat (8 or 9 other names, including the ubiquitous Mohammed, may be added as needed) as a murderer, a liar and a thief. 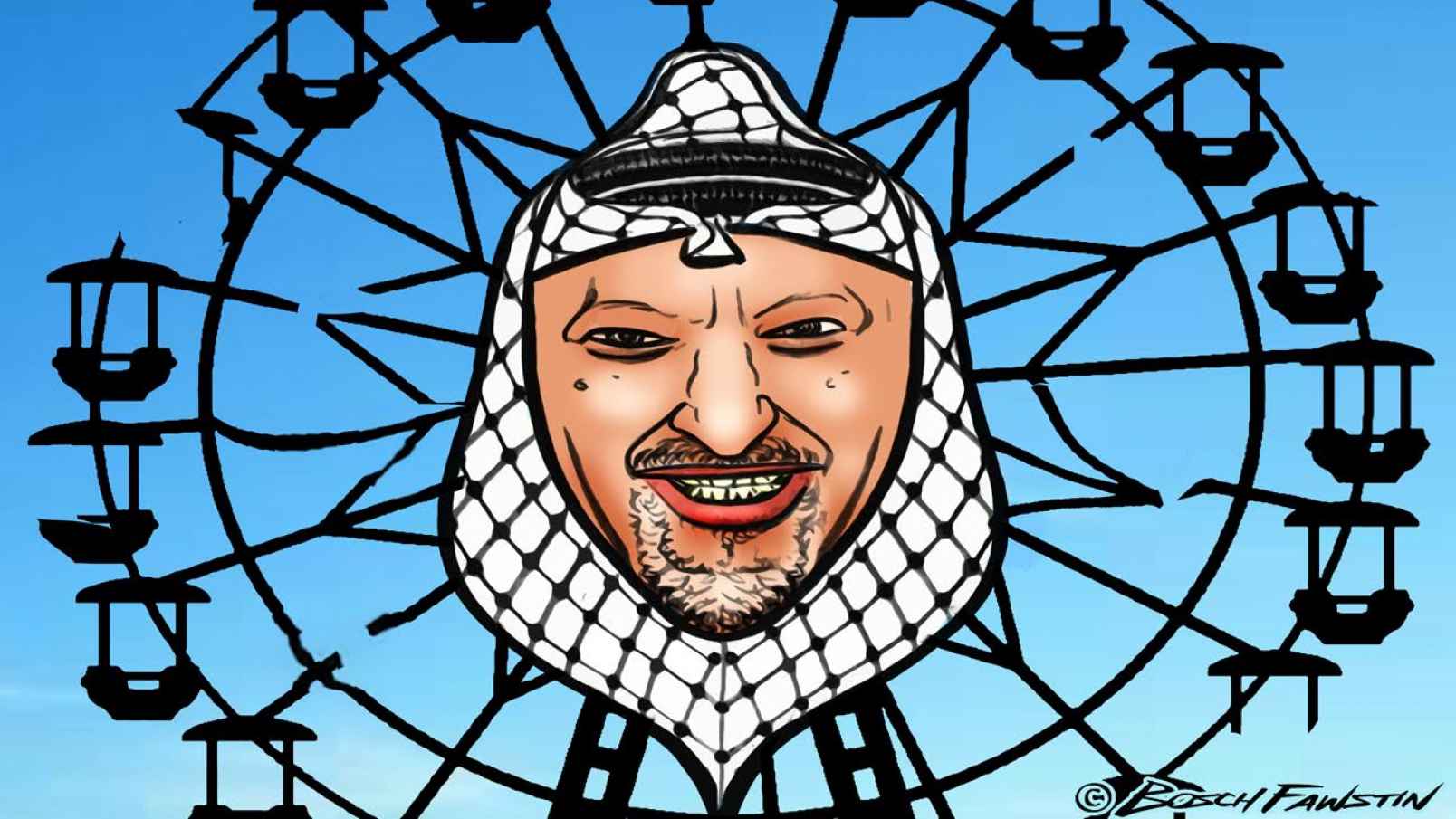 Twelve years ago, Arafat, the Egyptian terrorist leader who founded an imaginary country on mass murder and our foreign aid, died covered in his own vomit and diarrhea. The possible causes of death, in order of probability, were AIDS, according to his private doctor and the head of the PFLP terror group, an Israeli laser, according to the Palestinian ambassador to Sri Lanka, thallium poisoning by Israel, polonium poisoning by his Palestinian rivals and the trained ape from Poe’s Murders in the Rue Morgue.

The investigation into Arafat’s death went on for over a decade and dragged in the Institut de Radiophysique in Switzerland, Russia’s Federal Medical-Biological Agency and a mysteriously nameless team of French experts. Arafat’s “temporary” mausoleum, a building that looks like a Florida motel outhouse built on a giant scale, was rummaged and his rotting remains were poked over by three international teams who could agree on nothing except that the dead terrorist was probably dead.

Probably. It was hard to tell if Arafat was alive even back when he was still breathing and ranting.

After a decade of the minions of the occupying Muslim terror regime in Ramallah accusing each other, and occasionally the Jews with their lasers, the Arafat Museum has finally debuted the centerpiece of its exhibit, the dead Egyptian terrorist’s bedroom. Last month the museum managed to wrest Arafat’s Nobel Peace Prize from Hamas without anyone being dragged behind a motorcycle or thrown off a building. This marked a major improvement in relations between the two aspiring Palestinian terror states. If that doesn’t merit handing out more peace prizes to everyone involved, what would?

When Hamas seized Gaza, they looted Arafat’s headquarters and stole everything. They stole Arafat’s fake military uniforms. They took his wife’s Christian Louboutin shoes which go for $675 at Saks Fifth Avenue. They took all the furniture. They even pried the tiles out of the walls and stole all his pipes.

And they took his Nobel Peace Prize.

According to Arafat’s nephew, some of the loot wound up in the bazaars of Gaza where the cycle of theft inherent in the Palestinian Authority continued.

Hamas is an arm of the Muslim Brotherhood and Arafat was a former Muslim Brotherhood man. And yet his former Brothers sold his pants and schmattas in the streets of Gaza only a few years after he was laid low by a polonium AIDS laser. If you can’t trust a Muslim Brother not to pawn your Nobel Peace Prize in exchange for a lightly stained area rug and an unlocked iPhone, whom can you trust?

The bankrupt Palestinian Authority, which is always begging for foreign aid, will see the opening of the pricey 28,000 square feet Arafat Museum. Visitors will be able to view his gun and what the Associated Press touchingly describes as “the small bedroom where their longtime leader Yasser Arafat spent his final years” with “only a single bed and small closet that barely holds four suits”.

Only four suits. It’s almost enough to make you weep. The other suits must have been stolen by Hamas.

In real life, Arafat’s wealth was estimated at between $1 and $1.3 billion. At his peak, it might have been as high as $3 billion. His fashionable wife lived in Paris on a $100,000 a month allowance. Her personal refugee camp was located in a 19 room suite at the five-star Bristol Hotel. It’s unknown if UNRWA aid workers brought her caviar and champagne or if that indignity fell to the hotel staff.

Arafat wasn’t just good to his wife. He was also good to Bill Clinton’s wife. Arafat presented Hillary with gold and diamond necklaces, bracelets and earrings. Like the Bristol, Hillary’s diamonds and every act of racist mass murder perpetrated by Arafat’s terrorists was paid for by American taxpayers.

The Muslim settlers occupying ’67 Israel might have enjoyed a tour of the Bristol far more than a shrine that pretends Arafat wasn’t a billionaire who got ridiculously rich off his killing sprees. The “humble” bedroom is part of a museum, which also looks like a Florida motel, whose costs were estimated at $15 million and has been underway in some form or another since 2008.

Back when Mahmoud Abbas, Arafat’s successor, broke ground on it, it was supposed to take 18 months. But there’s usually more money to be made in not doing things in the West Bank than in doing them. And no one seems to be able to account for where the money is coming from which makes the project a true tribute to Arafat’s management of the Palestinian Authority.

But maybe it took that long to gather all those “thousands of personal belongings” of the dead mass murderer from the Gaza bazaars to deposit them in a museum dedicated to the Father of Palestine.

The entire thing is only temporary. Arafat is only temporarily resting in pieces, after being poked over by the French, the Russians and the Swiss, until his Jihadists, with some aid from the United Nations, conquer Jerusalem and relocate his remains, which by now can probably fit in a Ziploc bag.

Then Arafat will rise from his grave and demand that Hamas return his stolen pants.

It is important to properly memorialize Arafat. He was a murderer, a liar and a thief. And everyone knew it. The foreign ambassadors and leaders he dealt with knew it. Bill Clinton, who made him a world leader, knew it. You couldn’t spend 5 minutes with him before he tried to steal your wallet. Or, as was the case with Virginia Governor Terry McAuliffe, grope your leg and then give you a soulful kiss.

Arafat was a con artist who was the son of a failed con artist. He was born in Cairo and died near Paris. His first adult visit to Israel was with a band of Egyptian Muslim Brotherhood terrorists who tried to attack Israeli farms, but despite facing only a handful of Jews armed with guns, they lost and had to run back home. Arafat’s military track record didn’t get any better from there.

He didn’t beat Israel on the battlefield. Instead he lied and cried. He played the victim often enough that world leaders decided that the best way to end his terrorism was to give him a terrorist state in Israel. Like the Holocaust, “Palestine” happened because millions followed a psychotic con artist’s murderous fantasies while much of the rest of the world defended him and made excuses for him. The “Palestinian” disaster has cost the lives of thousands, Jews, Christians and Muslims, who do not receive a fraction of the tributes that the architects of that national and international disaster do.

Arafat has a museum. The latest tribute to the Muslim mass murderer is funded by American taxpayers. Meanwhile his victims lie in quiet humble graves. No visitors tour their little bedrooms or note how few suits they had. No experts exhume their remains to determine the causes of their deaths.

But we know what killed them. Palestine did.

Arafat’s Big Lie, a lie so big it would have made Goebbels stand up and cheer, invented an imaginary country. And then it used that country as a call to genocide and an excuse for mass murder.

Mohammed Yasser Abdel Rahman Abdel Raouf Arafat al-Qudwa was a mediocre murderer. He was a talented thief. But he was a truly unequaled liar. His lie still lives on. It has a flag. It receives billions in foreign aid every year. It is moving closer to recognition at the United Nations. Synagogues are bombed and Jewish students are assaulted on college campuses because of that lie.

Why was Arafat’s Palestine lie so successful? He told everyone what they wanted to hear.

The xenophobic Muslim majority in the region wanted to pretend that its efforts to exterminate the Jews were the noble strivings of a minority rather than the abusive atrocities of a racist majority.

The European left wanted to sweep away the Holocaust to legitimize anti-Semitism all over again.

Western leaders wanted another Czechoslovakia they could carve up, Munich style, and serve up on a platter to head off the age of international Islamic terror that they could see rising on the horizon.

That collection of lies, shameful treacheries and bigotry is why Palestine exists. It all deserves a proper museum. A museum of lies and massacres that would hold Arafat’s looted Nobel Peace Prize and the names of his victims. That would showcase the mansions of Gaza and the lies of the press. It would remind us that that the Holocaust was built not on mere force, but on liars and their accomplices.

And there could be no better name for such an institution than the Arafat Museum.

Trump’s Win is the Reichstag Fire of Internet Censorship