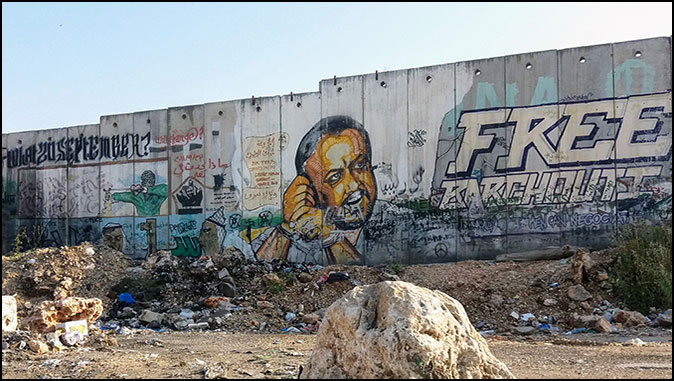 Mahmoud Abbas must be kicking himself. Why did he ever think it would be a good idea to call for parliamentary and presidential elections? He had, after all, gotten along quite well without them. The Palestinian President-for-Life is now entering the 16th year of his four-year term. But he wanted to show the Biden people that he was, in truth, deeply democratic, and what better way – indeed, the only way – to show that was to insist upon elections. Besides, he figured everything would go according to plan. His handpicked list of Fatah candidates would win a majority in the Parliament. And he would not face any serious opposition in the Presidential race. Abbas would make sure, with carrots and sticks, that Hamas would not field a presidential candidate. The carrots were “jobs for the boys” – Hamas leaders’ relatives suddenly offered employment with the PA, or other financial inducements (including bribes); the sticks would be visits by Fatah enforcers to Hamas leaders, telling them not even to think of running; both worked, and Hamas announced it would not put up a candidate for the presidency. And Mahmoud Abbas figured that both of his most dangerous, because much more popular, rivals — Mohammed Dahlan and Marwan Barghouti — would for different reasons not be able to run.

Mohammed Dahlan, who for the past decade has lived in the United Arab Emirates, where he became a counsellor to Crown Prince Mohammed bin Zayed, and is now known as “the Emirates’ favorite Palestinian.” Dahlan once headed a small army of Fatah members in Gaza; at the time some called Gaza Dahlanistan, until Hamas came to power in 2007 and drove the Fatah men out. In the West Bank, Dahlan soon became a rival of Mahmoud Abbas who, to get rid of him arranged to. have him arrested, put on trial, and convicted of “embezzlement” – a charge that took a good deal of chutzpah for Abbas to make, given that he has himself acquired a fortune of $400 million, largely by helping himself to aid meant for ordinary Palestinians. The conviction was important for Abbas, because it made Dahlan ineligible to ever run for office. And now that’s particularly important, given that in opinion polls, Dahlan consistently wins 60% of the vote against Abbas.

The second possible candidate for PA president is Marwan Barghouti. Like Dahlan, in a face-off with Abbas he would win 60% of the vote. He’s a member of one of the largest and most powerful clans in the West Bank; there are Barghoutis everywhere. Marwan Barghouti has only one handicap – it’s the very thing that makes him so popular. He’s currently serving five life sentences (plus 40 years) for being involved in murdering five Israelis. Abbas may try to disqualify him, insisting that if Barghouti won, he could not govern from an Israeli prison. But that’s not necessarily the case. Politicians have been known to govern from jail. Americans may remember James Michael Curley, who served as Mayor of Boston for two years from his prison cell. Barghouti has made sure that his wife is running for the Palestinian Legislative Council. He could govern by employing her, and a group of male Barghoutis, along with Nasser al-Kidwa, as his proxies. They could be sent directives from his prison cell. He could even use the Internet to broadcast his messages to his people. It’s not crazy — Marwan Barghouti would be “working from home.” Barghouti, it turns out, much to the chagrin of Mahmoud Abbas, has decided to run.

There is another possible way for Abbas to remain as president, aside from cancelling the elections. That is to declare that “because of his genuine remorse for his long-past defalcation, and because he has earned gratitude for persuading the UAE to deliver 50,000 dose of coronavirus vaccine to the Palestinian people, Mohammad Dahlan is hereby declared eligible to run for president of the Palestinian Authority.” Then Abbas can hope that his two rivals will split almost evenly the 60% of the electorate that is against him, while he wins with a plurality of 40%. It’s not impossible, when you’re dealing with Mahmoud Abbas, President-For-Life.

A report on this new challenge to Mahmoud Abbas is here: “Marwan Barghouti to run in PA presidential election,” by Khaled Abu Toameh, Jerusalem Post, April 15, 2021:

Kidwa made the announcement shortly after arriving in the Gaza Strip through the Rafah border crossing with Egypt.

A nephew of former PLO leader Yasser Arafat, Kidwa has joined forces with Barghouti to support a list of candidates for the May 22 Palestinian parliamentary election as well.

When Nasser al-Kidwa informed Mahmoud Abbas that he would not be running on Abbas’ Fatah list, as expected, but had chosen a list of candidates he would instead by supporting for seats in the parliament, an enraged Abbas promptly fired him from his sinecure as the head of the Yasser Arafat Foundation. Kidwa then got in touch with Barghouti, and they have now presented a joint list of their chosen candidates for parliament. And what’s more, they’ve announced their candidate for president:

“Our candidate for the presidential election is Marwan Barghouti,” al-Kidwa told Palestinian reporters. “On the 20th anniversary [sic] of his incarceration, we send Barghouti a message of solidarity and wish him success.”

Barghouti was arrested by the IDF in Ramallah on April 15, 2002. Two years later, he was convicted on five counts of murder and one count of attempted murder, as well as membership in a terrorist organization. He was sentenced to five cumulative life sentences and an additional 40 years….

Public opinion polls have shown that Barghouti is expected to defeat PA President Mahmoud Abbas and other candidates in a presidential election.

It is not clear at this stage whether Abbas, 85, will run again for office. Abbas was elected as PA president in 2005 for a four-year term.

Kidwa was recently expelled from Fatah after he formed his own party, National Democratic Forum, to run in the parliamentary election.

He later announced that he and Barghouti have agreed to form an electoral list called Al-Hurriya (Freedom).

Barghouti himself is not part of the Al-Hurriya list. Instead, his wife, Fadwa, is running together with Kidwa in the election for the Palestinian Legislative Council (PLC)….

All the opinion polls show Barghouti as soundly defeating Abbas, with 60% of the vote. What a victory for his party in parliament could do is drive his percentage of that vote still higher, and convince the electorate that, one way or another, a President Barghouti will be able to rule, even from an Israeli prison.

In his statements in Gaza, Kidwa said that his list has been facing “harassment and pressure” since its formation. He did not provide further details.

Abbas not only removed Kidwa from his sinecure, a very well-paid low-show job that will be hard for Kidwa to replace, but likely sent his enforcers to warn other Fatah members not to join Kidwa’s party, lest they find themselves or their relatives also losing their own jobs, or worse.

During his visit to Gaza, Kidwa is expected to meet with representatives of several Palestinian factions, including Hamas and Palestinian Islamic Jihad.

Abbas, meanwhile, urged Germany and other countries to exert pressure on Israel to agree to holding the Palestinian elections in Jerusalem.

His appeal came during a phone call with German Chancellor Angela Merkel on Wednesday night.

“President Abbas briefed Merkel on the Palestinian elections, stressing that they are going to be held in all the Palestinian territories, including east Jerusalem,” the PA’s official news agency Wafa reported….

That phone call to Merkel asking her to “pressure Israel” is pure theatre of the absurd. Abbas clearly wants Israel to turn down the request to let Palestinians in east Jerusalem take part in the elections. If Israel refuses, this hands Abbas the excuse he needs to cancel the elections – while still pretending he wanted so much to hold those elections. But, alas, the Israelis left him no choice but to cancel. Don’t blame Abbas. Blame – as always, and for everything – Israel.