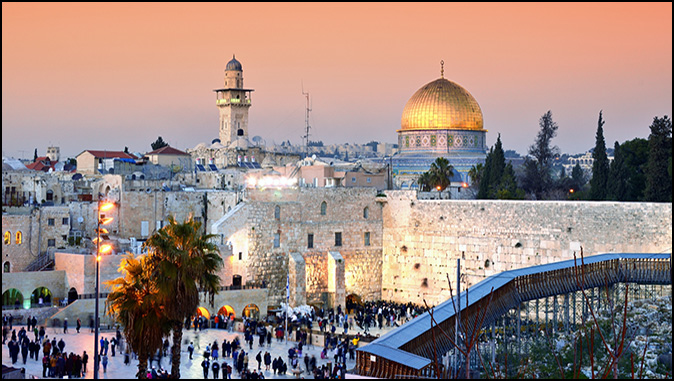 Jewish Prayers Now Allowed On Temple Mount
But for how long?
By Hugh Fitzgerald

Just at the end of the Six-Day War, when all of east Jerusalem, which includes the Old City and the Temple Mount, came into Israel’s possession, Defense Minister Moshe Dayan made a fateful decision. He decided that Muslims could continue to visit the Temple Mount, which they call the Haram al-Sharif, at all days and times. Jews, however, who had been barred from visiting either the Western Wall or the Temple Mount when the area was ruled by Jordan from 1949 to 1967, would be severely circumscribed in their visits, which would take place during a three-hour period in the morning and one hour in the afternoon, and only on five days of the week. But more fateful still was Dayan’s decision – he consulted no one – to prohibit Jewish visitors to the Mount from saying prayers aloud or even silently. He apparently wanted to placate the Arabs at the very moment when they had been so thoroughly defeated that they would have resigned themselves to whatever the Jews wanted, including exercising the right to pray openly and to visit for many more hours on the Mount. Dayan was not thinking through what such a policy would mean for Jews everywhere.

Within the last few years, little by little, the Israeli police have quietly begun to look the other way when Jews on the Mount silently mouthed prayers. That partial victory in practice led three young Jews to pray openly on the Mount, testing the limits of the new policy. They were arrested, and their lawyers went to court to challenge their detention. The result was a ruling by the Jerusalem Magistrate’s Court, one long desired by many Jews, that undoes Dayan’s decision in June 1967.

The Jerusalem Magistrate’s Court on Sunday ruled that Jews are now allowed to recite the Shema prayer and bow down on the Temple Mount.

The decision was taken following an appeal by the legal defense group Honenu against the arrest of three young Jews, detained after praying at the site. They received a 15-day restraining order.

The status quo at the site, administered by the Jordanian Waqf, allows Muslims to visit and pray there almost every day, while Jews are not allowed to pray there and can only visit the site on certain days at fixed times.

Judge Zion Saharay said that the recitation of the Jewish prayer “Shema Israel” presents no “reason that could lead to breach of peace,” saying three young Jews should not be banned from the site, as the police demanded.

“We are very happy with the court’s decision. It is time for the Israeli police to start arresting the rioters and people who commit crimes in Jerusalem, and to protect the inhabitants. They must stop dealing with esoteric issues while violating blatant religious freedom for Jews on the Temple Mount,” Honenu group lawyer Nati Rom said.

These Jews are being allowed to say a single prayer, the Shema, and to bow down on the Temple Mount. The “Shema” is as innocuous a prayer as one could imagine. It’s the Jewish declaration of faith:

This decision was a victory for religious freedom, undoing what Dayan never should have done in June 1967. Alas, this decision may be overturned. The Israeli police have appealed the ruling. A report on that wrongheaded appeal is here: “Police Appeal Court Ruling Allowing Jewish Prayer on Temple Mount,” Algemeiner, May 23, 2022:

The Israeli police have appealed the Jerusalem Magistrate’s Court ruling. They claim that allowing Jews to pray at the Temple Mount will cause an increase in “tension” with Muslims.

Well, of course it will. But whenever Israeli Jews assert their rights, from enforcing their property rights in the Sheikh Jarrah neighborhood, to praying at the Temple Mount, this immediately causes “tension” with the Muslims, who are unwilling to accept anything the Jews may do, no matter how innocuous or justified. Why must peaceful Jewish worshippers be prevented from saying prayers at the holiest site in Judaism because the Muslims threaten violence? Those threatening need to be put in their place, informed that just as no one is allowed to interfere with their Muslim prayers being said in the Al-Aqsa Mosque or on the Al-Aqsa Compound, similarly, no one will be allowed to interfere with the prayers of Jews on the same site. When the Jews started to pray silently on the Mount during the last year, the Muslims made all kinds of threats. The prayers continued to be mouthed. And nothing happened. There Is no reason why the Arabs will behave differently this time, when Jewish prayers are said (softy, no doubt) aloud. The Arabs will push as hard against the Jews exercising their legitimate rights as they can, but if they are met with what the Revisionist leader Zev Jabotinsky called the “Iron Wall,” they will back down.

Nadav Shragai has an interesting take on the controversy, and on the ”Shema Israel” prayer, here: “The Battle for the Temple Mount,” Israel Hayom, May 24, 2022:

We need to remind ourselves of these simple truths today, when Israeli policemen are dragging Jews who recite “Shema Yisrael” on the Temple Mount away from it; and when court cases are actually presented for the record as “The State of Israel versus ‘Shema Yisrael.’”

We now have the State of Israel going to court in the hope of overturning the recent decision of the Jerusalem Magistrates’ Court that Jews should be allowed to say prayers aloud on the Temple Mount. Let us hope that that decision is not overturned, and that the Israeli government treats Jews on the Temple Mount just as it treats Arabs. Yes, there will be some Arab riots, but after the expected tantrum, with a show of force by the police on the Mount, now protecting rather than prohibiting Jews saying prayers, the Muslims will in the end accept, with oriental fatalism, the new status quo.