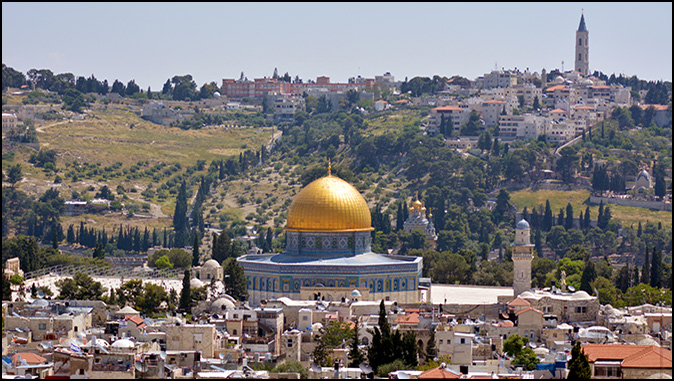 Jerusalem District Court Reimposes Prohibition on Jewish Prayer at Temple Mount
Caving in to Arab threats in order to “safeguard the public order.”
By Hugh Fitzgerald

In 1967, Israel’s Minister of Defense Moshe Dayan made a fateful decision. Just after Israel, through force of arms, took possession of east Jerusalem, including the Old City and the Temple Mount, Dayan declared that Jewish visitors to the Mount would not be allowed to pray, either aloud or silently, at the site. You read that right: At the holiest site in Judaism, Jews would not be allowed to pray. Dayan, himself completely secular and insufficiently appreciative of the rights of religious Jews, thought that such a prohibition would be a way of winning favor with the Arabs. Fifty-five years later, we see that it did not. Instead, at that point in time, when the Arabs were still reeling from their defeat, Dayan could have insisted that “at Temple Mount both Muslims and Jews will have their rights to pray guaranteed,” and the Arabs would have had to accept it. And the world, not then poisoned with anti-Israel sentiments, would have applauded: Freedom of religion for everyone. Who, except for the Arabs and Muslims, could object? In June of 1967, when support for Israel in the Western world was at its zenith, no one.

Over the last few years, the Israeli police on the Temple Mount, who are charged with the task of preventing Jews from praying, have loosened up a bit on their rigorous enforcement of the prohibition. They have begun to allow — by looking the other way — Jews to mouth silent prayers. And just weeks ago, three Israeli boys wanting to challenge the prohibition, said the “Shema” prayer aloud on the Temple Mount and then bowed, before the police took them away and charged them with violating the prohibition. The presiding judge at the Jerusalem Magistrate’s Court decided in favor of the boys, and against the Israeli enforcement of that longstanding prohibition on Jewish prayer.

The Arabs then erupted in fury, threating all kinds of violence, and accusing Israel of, inter alia, planning to take over the Al-Aqsa Mosque and turning it into a synagogue. In other words, the Israelis were faced with the unhinged anger of Palestinians and Israeli Arabs. The Israeli government promptly appealed the decision, and the Jerusalem District Court reversed the lower court’s decision, not out of any appeal to justice – justice would have demanded, rather, that Jews should be allowed to say prayers at the holiest site in Judaism – but only in order to avoid the violence that the Arabs threatened would be the result if Jews started praying aloud on the Temple Mount.

The full report on the Israeli court’s decision is here: “Israeli Appeal Court Quashes Ruling on Jewish Prayer at Temple Mount,” Algemeiner, May 25, 2022:

…Three Jewish youths who received a restraining order after praying at the site successfully challenged the police decision at Jerusalem Magistrates Court, which ruled on Sunday that their actions had not constituted a breach of the peace.

That prompted protests from the Palestinian leadership, threats from Palestinian militants and a pledge from Israel that the status quo would be preserved.

The state filed a counter-appeal on Wednesday with Jerusalem District Court, which found in favor after nightfall.

“The special sensitivity of the Temple Mount cannot be overstated,” Judge Einat Avman-Moller said in her ruling.

A right to freedom of Jewish worship there “is not absolute, and should be superseded by other interests, among them the safeguarding of public order,” she said.

In other words, whenever Arabs offer a credible threat of violence, their wishes must be respected in order to “safeguard the public order.” This is the so-called “heckler’s veto” on stilts.

In a statement to Reuters before Wednesday’s ruling, Nati Rom, a lawyer for the defendants, said: “It is strange and regrettable that, in the 21st century, in a Jewish and democratic country, the basic human rights of Jews would be so harmed.”…

“Strange and regrettable” indeed, that in the Jewish state, while Muslims on the Mount – sometimes numbering in the hundreds of thousands – can pray at any time and on any day, inside Al-Aqsa and on the 35-acre Al-Aqsa Compound –Jewish visitors on the Mount can visit only during four hours each day, and only on five days in the week and what is far worse, are prohibited from saying prayers at the holiest site in Judaism, lest Muslims be offended.

The overturning of the Jerusalem Magistrate Court’s ruling that gave Jews the right to pray is one more example of that weakness of Israeli leaders, who keep thinking that they can satisfy the Arabs by showing good will, by bending over backwards, by not doing anything to annoy them. It doesn’t work. The Arabs pocket every Israeli concession as theirs by right. Dayan’s fateful ruling in 1967, prohibiting Jews from praying on the Temple Mount, has prevented the exercise of religious freedom by Jews alone, and done nothing to mollify the Arabs. So Dayan’s 1967 Temple Mount Mistake still stands. What will it take, one wonders, how many more years of Israel yielding on the rules applied to the Temple Mount must pass, until the prohibition on Jewish prayer is finally revoked?