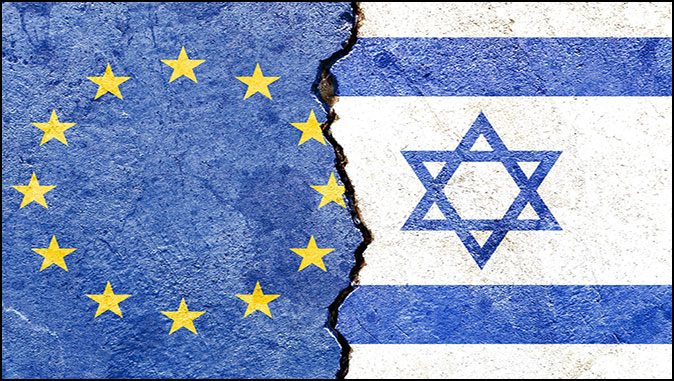 Israel’s New Foreign Minister Wants to Reboot Ties to the EU
But how to confront the moral equivalency and anti-Semitism?
By Joseph Puder

The foreign policy leadership of the European Union (EU) is thrilled over the departure of Benjamin Netanyahu from the office of prime minister. Netanyahu fought against their interests on the issue of the Iran nuclear deal, as well as on concessions to the Palestinians. Worse yet, they saw Netanyahu as the one who pushed them out in favor of the Americans insofar as Middle East peace mediation. Netanyahu’s pivot toward Asia, rather than Europe must have annoyed many EU officials. Last November, Netanyahu reproached the EU for failing to grasp the historic significance of the Abraham Accords with Bahrain, and United Arab Emirates, followed by normalization and peace treaties with Sudan, and Morocco. He pointed out that the Arab Gulf states have a different understanding of the situation in the Middle East than the EU bureaucrats. They moreover, understand the existential threat the Iranian regime poses to them and to Israel. The new government in Israel led by Naphtali Bennett, and Yair Lapid has incentivized EU officials to approach Jerusalem.

Lapid, Israel’s new Foreign Minister, and alternate Prime Minister, while not experienced in diplomacy, is keen to reboot Israel’s ties with the EU. The EU’s High Representative for Foreign Affairs, Josep Borrell, sensing an opportunity to re-direct Israel’s policies in the Middle East region, extended an invitation to Lapid to partake in the July 12, 2021 monthly EU Foreign Affairs Council.

According to the EU website, Borrell and Lapid met on Sunday (July 11, 2021), in Brussels. They listened to each other’s mutual expectations, had a wide ranging honest exchange on EU-Israel bilateral relations, regional issues, and on “how the dialogue with the Palestinians can be moved forward. They also discussed the importance to enhance EU-Israel relations, and considered how to address together existing challenges in order to achieve this common goal.”

In a previous video conference of EU Foreign Affairs Ministers (May 18, 2021) on Israel/Palestine taking place during the last war between Israel, and the terrorist Hamas rulers of Gaza, also called Guardian of the Walls Operation, Borrell responded to questions dealing with the conflict and suggested the need to “restore a political horizon.” He said “the status quo is not an option, because the violence will come again. As long as there is no peace you will never have 100% security.” Borrell added, “We support Israel’s right to self-defense, fully. This has to be done in a proportionate manner and respecting International Humanitarian Law. And the number of civilians dead and injured – among them children and women – is unacceptable.”

This is typical moral equivalency on the part of the EU, regardless of right and wrong. While it is true that a permanent political solution is necessary to end the violence, it is also true that as long as Hamas rules the Gaza Strip, armed and financed by the radical regime in Tehran, there will never be a permanent political solution. Hamas and the Palestinian Islamic Jihad in Gaza (PIJ) are committed to the destruction of the Jewish state on religious grounds. Hamas, a Muslim Brotherhood affiliate, is intolerant of non-Muslim entities in the region. Hamas’ charter testifies to that fact.

The Palestinian Authority (PA) leadership based in Ramallah/West Bank, is not only corrupt, it incites hatred toward Israel in its controlled educational system, media, and mosques. This leadership lacks the courage to take the steps necessary for peace, including ending the incitement against Israel, ceasing its historical revisionism, and defamation of Judaism. Both Yasser Arafat and Mahmoud Abbas, his successor, were afraid to commit to ending the conflict with Israel. They knew that doing so might cost them their lives.

Borrell and the EU’s call for “proportionality” is utterly absurd. Should Israel have fired 4,300 rockets into Palestinian homes in Gaza as Hamas and PIJ have done in firing rockets into Israeli homes? Moreover, Hamas initiated the conflict for inter-Palestinian political reasons, while Israel sought long-term accommodation with Hamas, and was willing to supplement it with humanitarian gestures. Civilian casualties on both sides are regrettable, especially when it involves children. It must be recognized however, that Israel’s Defense Forces is the only army in the world to warn its enemy’s civilians through phone calls, and flyers to evacuate their homes, and seek proper shelter. Hamas on the other hand, has used civilians as human shields. Many of the Palestinian women and children in Gaza were killed by Hamas and PIJ misfired rockets.

In Brussels, Lapid was a “busy beaver.” Prior to his meeting on Monday (July 12, 2021) with the monthly EU’s Foreign Affairs Council, Lapid met Sunday with his Egyptian counterpart, Sameh Shoukry. They discuss ways to rehabilitate the Gaza Strip following the 11 day conflict with Hamas in May, and ways to cooperatively combat terrorism in the region. Lapid made sure to bring up the issue of Israeli civilians and the bodies of IDF soldiers, Lt. Hadar Goldin and Staff Sgt. Oron Shaul, held by Hamas. Monday morning, Lapid held a private meeting with NATO’s General-Secretary, Jens Stoltenberg, followed by a meeting with Germany’s Foreign Minister, Heiko Maas. He then met with his French counterpart Jean-Yves Le Drian, and finally with the Netherlands counterpart, Sigrid Kaag.

France is crucial in Lapid’s mind, if Israel is to repair its relations with the EU. One of Lapid’s objectives is to bring Israel into the EU’s Creative Europe Program for supporting culture and heritage initiatives. In 2017, Miri Regev, then Likud’s Culture Minister, withdrew Israel’s request to join the program because Create Europe forbids Israeli initiatives in Judea and Samaria (West Bank), Eastern Jerusalem, and the Golan Heights, which the EU considered occupied territories, while Israel maintains that it has legitimate rights to establish settlements in these areas.

At the 1980, Venice meeting of the EU foreign ministers, they issued a declaration which sought to balance Palestinian rights with Israel’s right to exist in security. Since then, the EU has been steadily pushing for the two-state solution. And, since 1997, the EU has provided assistance to the PA in order to promote economic, political, security, and social reforms in the Palestinian territories. Due to the widespread corruption within the PA, little has been done to better the lives of the Palestinians other than provide financial assistance to the families of convicted terrorists. The EU also funds various Non-Governmental Agencies (NGO’s) that seek to undermine the Jewish state.

While in economic terms, the relations between Israel and the EU is productive and growing. Politically, the EU eagerness to appease Iran and maintain the Iran nuclear deal despite Tehran’s pursuit of terror on European soil, and regardless of Iran’s gross violations of the deal, is confounding Israel. Israel and the EU are also on different tracks; secular, multicultural, and post-nationalist Europe (the soccer field is Europe’s primary expression of nationalism) resents Israel’s proud nationalism and its religious character (although the majority of Israelis are secular). The issue of anti-Semitism in Europe is also a major worry for Israel.

In response to the EU’s persistent support for a two-state solution, Lapid pointed out to the EU foreign ministers that,

It is no secret that I support a two-state solution. Unfortunately, there is no current plan for this. However, there is one thing we all need to remember. If there is eventually a Palestinian state, it must be a peace-loving democracy. We cannot be asked to take part in building of another threat to our lives.