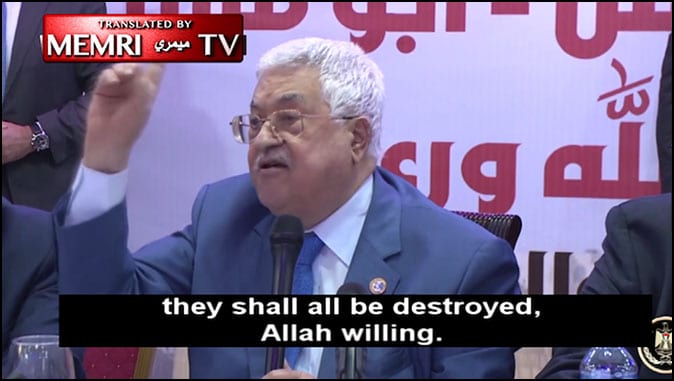 Israeli Court Upholds Right of Israel to Seize ‘Pay For Slay’ Payments
Palestinian Authority stuck in a jam on how to help terrorists and their families.
By Hugh Fitzgerald

As is well known, the Palestinian Authority rewards terrorists, if alive, and their families, if they are dead, by paying stipends to them for whatever murderous acts against Israelis those terrorists have manage to carry out. This “Pay-For-Slay” policy has outraged Israel, which in 2019 started to deduct the amounts the P.A. allocates to this program from the tax revenues collected on its behalf by Israel. For a few months, the PA rejected any of those tax revenues from which the “Pay-For-Slay” amounts were deducted, but it finally relented and again chose to accept the taxes collected by Israel, minus the amounts that Israel calculates the PA continues to spend on the Pay-For-Slay Program.

The Pay-For-Slay Program thus remained in place. But the Israelis then went through the courts, where a recent victory may make it impossible for the Pay-For-Slay program to continue. The story is here.

Israel’s Tel Aviv District Court handed down an unprecedented ruling Sunday, saying that the state had the right to seize funds the Palestinian Authority is paying terrorists jailed in Israel.

This goes far beyond the policy of “deducting” from taxes collected by Israel on behalf of the P.A. the sums spent by the P.A. on jailed terrorists or on the families of terrorists who died while committing their acts. The court’s decision allows the Israeli government to seize from jailed terrorists funds provided by the P.A.

The court’s ruling followed a petition by the relatives of Mansur Omar, convicted of aiding and abetting a 2005 terrorist attack in which six Israelis were killed, to prevent the state from seizing his PA-provided funds.

Israel’s Counterterrorism Law of 2016 lists provisions according to which the Defense Ministry can seize “pay‐for‐slay” stipends ‐‐ funds Ramallah pays jailed terrorists and the families of terrorists killed while committing attacks against Israel….

Palestinian Authority leader Mahmoud Abbas has refused to retire the policy, declaring the PA will continue to pay terrorists’ salaries “even if it has to spend its last penny to do so.”

Does that “last penny” the PA will pay out include the $400 million fortune Abbas and his two corrupt sons Nasser and Tarek have accumulated through massive corruption? No, I thought not.

Israeli Defense Minister Benny Gantz lauded the ruling, saying that he plans to “move forward with a variety of moves through the National Bureau for Counter Terror Financing [within the Defense Ministry] to block the transfer of funds to terrorists and terrorist organizations.

Omar’s lawyer protested before the court that the motion to seize the funds was based on classified intelligence to which he was not privy, leaving him “unable to properly refute any claims” against his client.

But the lawyer hasn’t challenged the verdict that sent Omar to prison. He was convicted of aiding and abetting a 2005 attack in which six Israelis were killed. There was no new information about that case, nothing to exculpate Mansur Omar. The suit was over something else: the right of the Israeli state to seize funds given to Mansur Omar (that is, deposited in his account) by the P.A.

The judge presiding over the hearing was briefed on the information in chambers. The ruling noted the evidence presented to the court was “compelling,” making the forfeiture of the funds warranted.

What kind of evidence? Not just evidence about the crimes for which Mansur Omar was convicted, but about the incentivizing effect of the Pay-For-Slay program in encouraging others to engage in terrorism, secure in the belief that they, or their families, if they die during the commission of their acts, would be financially well-taken care of, receiving stipends several times the average annual wage for Palestinians.

Now that the Tel Aviv court has upheld the right of the Israeli government to seize funds provided a jailed terrorist by the P.A., it’s hard to figure out what the P.A. might do to help those terrorists and their families. If they were now to attempt to funnel P.A. funds through dummy groups and individuals who would claim only to be “personal friends” of the jailed terrorists, or if they had been killed, of their families, in order to serve as conduits for P.A. funds, the Israelis would quickly see through the charade and seize those funds, too. And these seizures would undoubtedly survive legal challenges, as just happened with Israel’s seizure of funds given to Mansur Omar. Pay-For-Slay may have just been dealt a mortal blow.

The One and Only Enduring Palestinian Vision

The One and Only Enduring Palestinian Vision Dreaming of the destruction of the Jewish state.…

Arabs: Israel Is Not Our Enemy

Arabs: Israel Is Not Our Enemy By Khaled Abu Toameh Originally Published by the Gatestone…

The New Middle East By Sara Al Nuaimi Originally Published by the Gatestone Institute. The…

How Hamas Plans to Destroy Lebanon

The ‘Merchants of the Palestinian Issue’