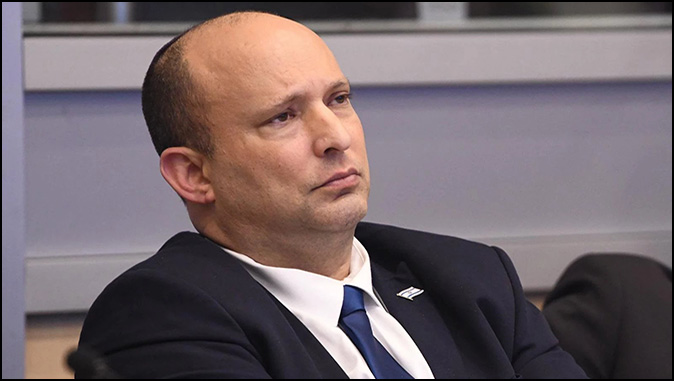 Naftali Bennett’s press conference on Monday, June 20, 2022, with Yair Lapid at his side was not quite as dramatic as portrayed by the Israeli media. The coalition government Bennett and Lapid wove together was fragile from the very beginning. It was never an organic body. Instead, it was a combination of left-wing parties such as Meretz led by Nitzan Horowitz, and center-left Labor party led by Mirav Micahaeli, the centrist parties of Lapid’s Yish Atid and Benny Gantz’s Blue and White party, the center-right parties of Bennett’s Yamina, Gideon Sa’ar’s New Hope, and Avigdor Lieberman’s Israel Our Home. In addition, the Islamist Arab party Ra’am, led by Mansour Abbas gave the coalition its 61 needed votes. Issues of national security were always problematic because of Ra’am’s objections, as well as Arab Knesset Member Ghaida Rinawie Zoabi of Meretz. The coalition was therefore always on borrowed time.

At the Knesset’s press conference in Jerusalem Hall, Prime Minister Bennett hailed his government’s achievements in its year-long existence. He blamed the failure to pass the Judea and Samaria regulations law on the need to go back to the voters by dissolving the Knesset (Israel’s parliament). This will be the 5th election in Israel in less than four years.

A glum Prime Minister Bennett didn’t imagine the demise of his coalition government after one year. Moreover, he never thought that the end would come by the desertion of members of his own Yamina party. It began almost immediately after the government was formed, when Yamina Knesset Member Amichai Chikli refused to vote with the coalition. A few months ago it was Idit Silman who resigned her committee chairmanship, and abstained from supporting the coalition. Last week it came down to Nir Orback, a former stalwart Bennett ally, who could no longer support the coalition. Abir Kara, another Yamina MK was also on his way out. In the end, the only loyal Yamina MK at Bennett’s side was Matan Kahana, who served briefly as Minister of Religious Affairs. Ayelet Shaked, the Interior Minister, and Bennett’s perennial partner in forming the Yamina party, was only notified on Bennett’s decision to go to elections by phone, while she was on a state visit to Morocco. Bennett’s final act to dissolve the coalition and call for elections was a way of avenging his party members’ desertion. Once the Knesset is dissolved, elections are tentatively scheduled for November 1, 2022.

With Lapid taking over as the interim Prime Minister until the elections, and Bennett being out of a government portfolio, Lapid it appears, would entrust Bennett with the Iran file, at least until the elections. Should Lapid form the next coalition government, it is more than likely that he will insure a spot on his party list for Bennett, and perhaps a major portfolio.

For Bennett, a former successful high-tech entrepreneur, money was never his primary objective. He sought public office because he believed in his ability to contribute to Israel’s prosperity and peace. He has essentially fulfilled his highest ambition in becoming prime minister, albeit, for only a year. At the age of 50, Naftali Bennett is still a young man, and is unlikely to retire or go back to the business world. But his political future will no longer be with a center-right party. He has alienated too many of his longtime constituents, and while he gave Lapid a chance to become prime minister (although for a very short term) who otherwise would be unlikely to attain that post, Bennett is still hopeful that he can play a major role in Israel’s national politics. Having served as Minister of Defense and Minister of Education, I wouldn’t be wrong to guess that Foreign Minister would be his next quest.

In terms of his record in the office of prime minister, Bennett doesn’t leave “scorched earth.” True, he failed to bring down the cost of living, primarily the cost of housing and food. His leadership was less than impressive since he had to contend with larger egos the likes of Lapid and Gantz, who essentially ran their ministries (Foreign and Defense) independently. However, when it came to the big issues pertaining to Iran, and deepening relations with the Gulf States and Egypt, he did rather well. Bennett stood firm on his/Israel’s principles in dealing with the US. He kept Hamas and Hezbollah quiet, and he scored good marks in his mediation between Ukraine’s President Zelensky, and Russia’s Putin. He leaves Israel’s economy in fairly good shape, with full employment and lower deficits. While inflation is creeping up in Israel, it is still lower than in the US. But he missed out on effectively tackling the Omicron wave in Israel.

Opposition leader, former Prime Minister Benjamin Netanyahu, seemed to be elated with the demise of the coalition government. He stressed its shortcomings including among other things the lack of personal safety, and the absence of national pride. He promised to form a “wide” government, led by the Likud, and bring back national pride as well as sign more normalization deals with Arab states. Netanyahu also insisted that he will not sit in a government with the Islamist Ra’am party.

A poll by Kan-News-TV and the Kantar Institute, asking who is the most qualified person to serve as Prime Minister, gave Netanyahu 48%, while Lapid scored only 31%. Still, Netanyahu would rather delay the dissolution of the Knesset for at least ten days, in the hope of forming an alternate right-wing coalition government led by him.

The same poll conducted a day after Bennett’s announcement of dissolving the Knesset, asked which party you would vote for if elections were held “today?” Netanyahu’s Likud party got 36 seats in the 120 seat Knesset, a gain of 6 seats from the current 30. Lapid’s Yesh Atid party received 21 seats, adding 3; Gantz’s Blue and White with 9 seats, showed a gain of 1 seat; Smotrich’s Religious Zionism party got 9 seats, a gain of 3 (part of Netanyahu’s bloc). Deri’s Sephardic Orthodox Shas party with 8 seats, lost 1 (part of Netanyahu’s bloc); Gafni’s Torah Judaism with 7 seats, stayed the same (also part of the Netanyahu’s bloc); Odeh’s Arab Joint List with 6 seats stayed the same. Michaeli’s Labor party with 6 seats lost 1; Bennett’s Yamina party with 5 seats, lost 2; Lieberman’s Israel Our Home party, at 5 seats, lost 2. Sa’ar’s New Hope party barely passed the electoral threshold with 4 seats, losing 2, and Mansour Abbas’ Islamist Ra’am party stayed the same with 4 seats. Horowitz’s Meretz party didn’t pass the threshold. This means that the Netanyahu’s bloc garnered 60 seats vs. 54 seats of the Lapid/Bennett bloc. Should Netanyahu be able to recruit one defector from Yamina or New Hope, he could once again become prime minister.

A fifth election is detrimental to Israel’s national security, and its economy. Numerous vital bills in the Knesset will be delayed. Israel needs a stable government that only a national unity government can provide.