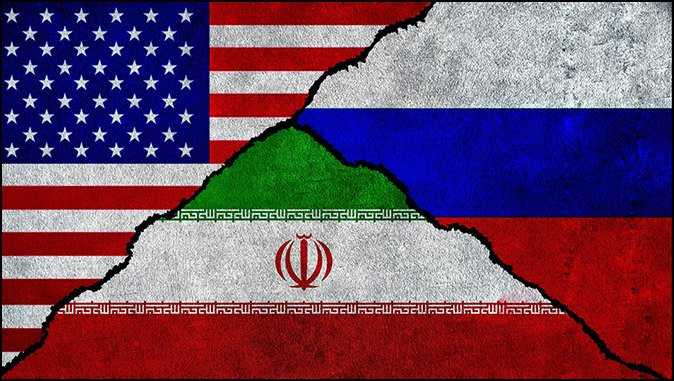 Is the Biden Administration Colluding with Russia to Allow Iran to Go Nuclear?
By Majid Rafizadeh

It has been nearly a year since nuclear negotiations with Iran stalled; since then, the Biden administration appears to be sitting idly by watching the ruling mullahs advance their nuclear weapons program.

The mullahs are freely expanding it, now enriching uranium to nearly weapons-grade level. Iran is also seeking assistance from its ally, Russia, to bolster its nuclear program, according to the US intelligence officials.

Iran has been providing attack drones to Russia that are being used in Ukraine and is preparing also to deliver ballistic missiles. As a result, it should not come as a surprise that the Islamic Republic is going to seek something in return from Russia for these weapons deliveries.

The governments of France, Germany and the UK made a joint statement to the board of governors of the International Atomic Energy Agency (IAEA) this month, calling the situation “very dangerous,” and saying:

“Iran continues its unprecedented nuclear escalation. This raises serious doubts as to the nature of Iran’s nuclear programme, which threatens regional and international security.”

The emboldened and empowered leaders of Iran have been stonewalling the IAEA, which monitors both the Islamic Republic’s nuclear activities and compliance. The regime continues to keep the IAEA’s cameras at Iran’s nuclear facilities turned off. By doing so, it is effectively preventing the IAEA from monitoring its nuclear activities, including uranium enrichment. This led to a recent statement by the EU that pointed out:

“For the past years, the EU has repeatedly expressed, and again reiterates today, its serious concerns at the presence of nuclear material at undeclared locations in Iran. The EU is deeply concerned that the current location of this nuclear material and/or of equipment contaminated by nuclear material, which may still exist in Iran today, is not known to the Agency.

“On many occasions, the EU has called on Iran to provide the IAEA with the necessary explanations in accordance with the obligations under its Comprehensive Safeguards Agreement. The Board of Governors adopted two resolutions, in June 2020 and June 2022, to call on Iran to clarify those outstanding safeguards issues. At the September 2022 Board Meeting, 56 States emphasized this call through a Joint Statement. Despite those repeated calls for action, Iran has yet to take the necessary actions and provide technically credible explanations.”

Iran’s regime also refuses to answer the IAEA’s questions about uranium particles found at three of its undeclared nuclear sites. The UK, France and Germany previously acknowledged the fact that Tehran “has no credible civilian need for uranium metal R&D and production, which are a key step in the development of a nuclear weapon.”

The Iranian regime keeps claiming that its nuclear program is designed for peaceful purposes. If this true, however, why is the regime refusing to cooperate with the IAEA and why it has shut off its cameras at the nuclear facilities?

Evidence, and the words of Iran’s officials, not only indicate that the regime desires to obtain nuclear weapons, but that it could already “produce” a nuclear bomb today. Based on Israel’s 2018 seizure of documents from a “nuclear archive” in Tehran, the Institute for Science and International Security revealed:

“Iran intended to build five nuclear warheads, each with an explosive yield of 10 kilotons and able to be delivered by ballistic missile… This report discusses another document available from the archive that provides an early look at how Iran planned to achieve its goal of designing and manufacturing five nuclear weapons…”

The Biden administration doubtless understands that if Iran, called by the US State Department the “world’s worst state sponsor of terrorism,” becomes equipped with nuclear weapons, it is likely that its nuclear weapons will fall into the hands of its proxy and militia groups, and that the Iranian regime will share its nuclear technology with them. The Iranian regime has already set up weapons factories abroad and manufactured advanced ballistic missiles and other weapons in foreign countries, including Syria.

The Biden administration also doubtless understand that other countries in the region will not just accept such an existential threat and begin a vastly destabilizing race of their own towards nuclear weapons.

To what lengths will the Biden administration go to protect Iran’s mullahs, allow them to crush anti-regime protestors, and collude with Russia to help Iran acquire nuclear weapons capability?