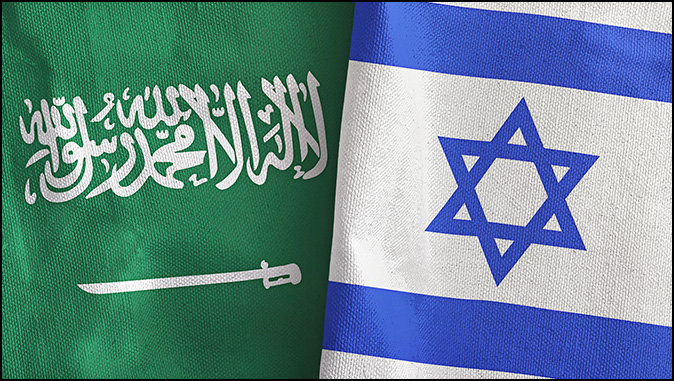 Is Saudi Arabia Next to Make Peace With Israel?
A three-way deal involving Israel, Saudi Arabia, and the U.S. may expedite the process.
By Joseph Puder

Ever since the signing of the Abraham Accords in September 2020, the prevailing question was “would Saudi Arabia be next.” It appears now that things are moving in the right direction, and a deal might be struck that will bring the relationship between Saudi Arabia and Israel closer, if not to outright normalization and diplomatic relations.

As the guardians of the two holiest Islamic shrines in the cities of Mecca and Medina, the Saudis have felt compelled to back the Palestinian cause. Publicly, Riyadh already declared in 2002 that normalization with Israel was dependent on progress in the Israeli-Palestinian peace process. Riyadh did however acknowledged, albeit quietly, the fact that Palestinian intransigence, and its refusal to consider the Trump “Deal of the Century,” is largely responsible for the lack of progress in the peace process.

The 36-year old Crown Prince Mohammad Bin Salman (MBS), who has become the effective ruler of Saudi Arabia, has diminished the power of the Wahhabi Muslim religious establishment, and has allowed Saudi women to drive, thus scoring him points with the young people. These same young people (under 30) who are now the majority population in the Kingdom have in a recent official survey, strongly favored normalization with Israel.

While open relations with Israelis are still not approved, secret meetings between Israel and Saudi top officials have taken place under the radar. It has been reported that in November 2020, Prime Minister Netanyahu made an unannounced trip to Saudi Arabia to meet with crown prince Mohammed bin Salman and US Secretary of State Mike Pompeo. The Saudis, especially the younger generation, view Israel as both a technological and military power that could help in checking Iran’s malevolent activities in the region. They have observed the economic benefits the United Arab Emirates has derived from peace with Israel, and desire the same. Young Saudis covet Israeli technology and Israel’s open society. MBS is also cognizant of Israel’s technological and military advancements. Israel, for its part, understands that peace with Riyadh will open the door for Israel to virtually the entire Sunni Muslim world. Moreover, Saudi petrodollars could be a major source of investment in Israeli technology.

Currently, a three way deal is under way between Israel, Saudi Arabia, and the US. Hopes are that it would lead to normalization in the relations between Riyadh and Jerusalem. The deal being worked out by Washington would open Saudi airspace to all Israeli flights. The deal is expected to significantly shorten flight times between Israel and destinations in the Far East, as well as reduce flight prices. In exchange, Israel would give a “green light” to the transfer of the tiny but strategically significant islands in the Red Sea named Tiran and Sanafir, from Egypt to Saudi Arabia. Since the islands were returned to Egypt as part of the peace agreement with Israel, the treaty signed at Camp David in 1979 requires Israeli approval for their transfer to a third country. Egypt seeks financial aid from the Saudis as part of the deal.

The US part of the deal involves ending the boycott of MBS who is accused of murdering the sometime journalist for the Washington Post, Jamal Khashoggi. In return, the Biden administration would ask the Saudis to increase its oil production to ease the economic burdens of US drivers at the gas pumps. For President Joe Biden, who has shunned MBS, and alienated the Saudis over dropping the Houthis, the Yemeni proxies of Iran, from the list of terrorist organizations, is now having to eat “humble pie.” The western sanctions against Russia’s brutal invasion of Ukraine, and the boycotting of Russian energy supplies has created a global energy crisis, which impacts on American consumers. With the November elections looming large on Biden’s mind, inflation and gas prices skyrocketing, low approvals, and projected losses to Republicans are compelling Biden to travel to Israel, but Riyadh is certainly his ostensible target. Biden’s expected visit to Israel is meant to galvanize the Democratic Party Jewish donors and voters who are a significant part of the party’s base.

Both the Obama and Biden administrations, in their efforts to realign US foreign policy in the region, have made upgrading relations with Iran’s Islamic Republic a major objective, and focus on renewing the 2015 nuclear deal (JCPOA). In the process, they have criticized Saudi Arabia for its human rights record, and minimizing Iran’s massive human right abuses. According to the New York Times, US Democratic Party House members have appealed to President Biden to focus on the following issues with the Saudis: global oil markets, the war in Yemen, the detention of human rights activists, the investigation of Khashoggi’s killing, efforts to acquire civil nuclear technology, and military cooperation with China.

Saudi Foreign Minister Prince Faisal bin Farhan, at the Davos Economic Forum last week, repeated the old Saudi mantra about diplomatic relations with Israel not being on the immediate horizon. He stated that “We have always seen normalization as an end result for a path to peace with the Palestinians.” Israel’s Foreign Minister Yair Lapid also minimized expectations, saying, “Normalization with Saudi Arabia will happen with baby steps.” Also last week US Secretary of State Antony Blinken pointed out that, “Saudi Arabia is a critical partner in dealing with extremism in the region, in dealing with the challenges posed by Iran, and also I hope in continuing the process of building relationships between Israel and its neighbors both near and further away through the continuation, the expansion of the Abraham Accords.”

Clearly, President Biden’s visit to Saudi Arabia might very well be the opportunity to bring home a major victory by persuading the Saudis to join the Abraham Accords. It will be a major foreign policy accomplishment for Biden in a presidency that has seen few accomplishments in domestic or foreign policy. If he was to get the Saudis to increase their oil output, and bring relief to American drivers, that would also be a significant triumph.

Israel has always been ready for peace with its Arab neighbors. To make peace with Egypt and Jordan, albeit a cold peace, Israel gave up land for peace. The Saudis are practically neighbors, and from the beaches of Eilat one can see Saudi Arabia’s mountains. The Iranian menace to the region is uniting the Arab Gulf states and Israel. In a recent interview with the Wall Street Journal, Saudi officials declared that support for the Palestinians is no longer a foregone conclusion. Young Saudis in particular, are disillusioned with the Palestinian Authority, and resent Hamas’ close ties with Iran. As Saudi officials put it, “If Hamas builds a relationship with Iran to protect themselves, then why don’t we have a relationship with Israel against Iran to protect ourselves?” Perhaps it is no longer a question of if Saudi Arabia would make peace with Israel, but rather when.