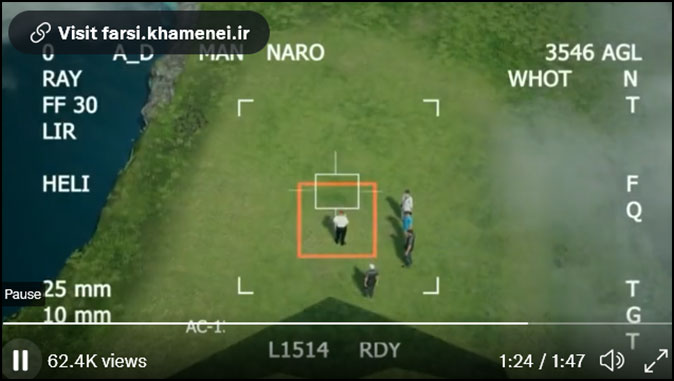 It’s readily available on Twitter, of course: the website of the Supreme Leader of the Islamic Republic of Iran, Ayatollah Ali Khamenei, has released a video showing the assassination of Donald Trump and former Secretary of State Mike Pompeo on the golf course at Mar-a-Lago. This comes as Iran has been issuing a barrage of threats against Trump for the killing of Quds Force commander Qassem Soleimani in Jan. 2020. As Biden’s handlers persevere in their attempts to appease Iran at the nuke talks in Vienna, the Islamic Republic grows more emboldened, audacious, and aggressive by the day.

The establishment media has been dragging its feet about covering the threats from Iran. After all, it isn’t as if Khamenei threatened Old Joe Biden or Nancy Pelosi. Threats to Trump? Big deal. So it was perhaps understandable that a reporter was slow on the uptake regarding the blizzard of threats the Iranians have issued against Trump and others.

A reporter asked White House Press Secretary Jen Psaki Monday if there had been any threats at all: “Jake Sullivan had a statement over the weekend with regards to Iran and sanctions and he alluded to the threats against American officials. Should we interpret from that that the U.S.’s intelligence — that there have been threats, in particular against Trump officials who were involved in the Soleimani strike?”

Psaki answered tepidly, without naming the dreaded Trump: “Well, I’m not going to get into intelligence here, from the podium. But we’ve certainly seen concerning public rhetoric from Iranian officials about individuals from previous administrations, even before sanctions from this weekend, and that’s unacceptable.” Previous administrations? The Iranians are actually threatening to murder people from only one administration, the one that didn’t bend over backward to appease the bloodthirsty regime in Tehran.

Psaki did go on to suggest that Biden’s handlers would be working to protect those who were threatened, even their nemesis Trump: “As the National Security Advisor, Jake Sullivan, said in his statement over the weekend that you just referenced: ‘As Americans, we have our disagreements on politics…on Iran policy,’ and other issues, of course. ‘But we are united in our resolve against threats and provocations. We’re united in the defense of our people.’ And we’re going to protect and defend our own people. But I’m not going to get into more specifics.”

Nor did Psaki bother to explain that the Iranians are only bold enough to issue all these threats because the Biden administration has been so supine and appeasement-minded. The Iranians even saw this coming: it is enlightening to remember what former Iranian President Hassan Rouhani said on Nov. 5, 2020: “the next U.S. administration will surrender to the Iranian nation.” This wasn’t just tough talk. In light of Biden’s handlers’ apparent willingness to give the mullahs all they want and more, it was a sober assessment of the geopolitical situation.

The Trump assassination video shows that the mullahs have not changed their stance since Nov. 2, 2015, when a commanding majority of the Majlis, 192 of its 290 members, agreed to a statement saying that “Death to America,” which continues to be chanted at every Friday prayer in Iranian mosques as well as at anti-American protests, was not just a slogan: it had “turned into the symbol of the Islamic Republic and all struggling nations.”

It is also useful to recall that on Sept. 23, 2015, two months after the nuke deal was finalized, Iran’s Supreme Leader, Ayatollah Ali Khamenei, published an article entitled “The Idols Will Be Shattered,” illustrated with a drawing of the Statue of Liberty shattered in pieces. In it, he declared, “The idol of the soul, the idol of pride, [and] the idol of sexual lust; the idol of tyranny and subservience; the idol of global tyranny [that is, the U.S.]; the idol of sloth and irresponsibility; and the other idols that shame the precious human soul—a plan that will spring forth from the depths of the heart will shatter them.”

Do Biden’s handlers actually think that this sort of rhetoric only applies to Trump, and not to them? Khamenei crowed last May: “In the present time, the balance has been tipped in favor of the world of Islam.” Now he is behaving as if there isn’t a power on earth that can stop him from carrying out his plans. Old Joe Biden and his weak and feckless team of foreign policy “experts” have given Khamenei every reason to believe that.