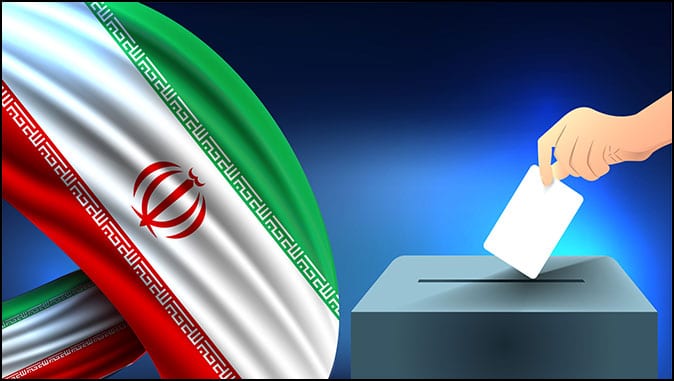 Iran’s so-called presidential election today, June 18, is a fraud, a ruse for the world to observe and seemingly domestically designed to release some pent-up popular pressure.

Iran’s presidency itself is a weak institution of weak political superstructure which also includes the legislative branch (the majles, the sort-of equivalent of a parliament). This highly visible but insubstantial governmental apparatus masks the real power in Iran: the “deep state” of the Islamic Republic.

The genuine power in Iran is made up of unelected, authoritarian, religious and fascist military elites who, for decades, have, frozen in place the revolutionary, theocratic ideology of the 1979 Islamic Revolution. The nomination mechanism for presidential candidates is itself part of the fraudulent process. All candidates must first be approved by the hardline and powerful Council of Guardians (COG), which decides whether the prospective candidate is loyal enough to Islamic revolutionary principles. Any candidate who is judged by the appointed 12 member Council of Guardians (six mullahs, six laymen) to be insufficiently “Islamic” or unwanted by the clergy is rejected. Almost always, this process favors conservative hardliners, thereby serving its intended purpose.

The office of the Supreme Leader (Rahbar), who is the titular head of the “Deep State,” is occupied by the autocratic Ayatollah Ali Khamenei. It is the Supreme Leader who can always intervene and make known his preferences to the Council of Guardians behind the scenes before the COG announces its final list of approved candidates

Today’s presidential election, the 13th since the 1979 revolution , will field a list of seven candidates. According to opinion polls and Iranians, as well as the Western media and think tanks, the odds-on favorite to win is Ebrahim Raisi, the hardline Chief Justice of Iran and Khamenei’s former student. Khamenei has made it clear that Raisi is the candidate he favors.

As Tehran Prosecutor in 1988, he was responsible, in part, for the executions of thousands of political prisoners. Raisi has the blood of innocents on his hands.

The majority of registered voters, as predicted by one poll, may boycott the election. Past elections have either been rigged in favor the hardliners, as in today’s election, or so overshadowed by the power of the regime’s deep state, that no president is been able to effect any substantive reforms to loosen the chokehold that the mullahs maintain on Iranian citizens.

Occasionally, despite the cautionary measures taken by the “deep state,” a candidate not favored by the “ton-ro” (hardliners), such as Mohammad Khatami, was elected president, first in 1997 and again in 2001. The candidate favored by the “deep state” and Khatami’s chief opponent in the 1997 presidential election was the conservative Speaker of the Majles (Consultative Assembly), Ali Akbar Nateq-Nouri, but the electorate, at the last minute and in great numbers, swung the vote in favor of Khatami who was viewed as a genuine reformer. In an upset of major proportions, he garnered about 70% of the vote.

This scenario could repeat itself today. As a consequence of the Council of Guardians’s approval of several hardline presidential candidates, a less-hardline nominee could emerge as the victor. The most likely dark horse is former Central Bank of Iran President Abdolnasser Hemmati, a (relative) moderate. Hemmati seems to have boosted his chances by directly challenging Raisi in Iran’s three nationally televised presidential debates. Additionally, earlier this month, in an apparent appeal to female voters, his wife, Sepideh Shabestari, courageously appeared on state television without a chador, the head covering other candidates’ wives usually wear. Hemmati boldly stated that Iran must improve relations with the West and announced that he would be willing to meet US President Joe Biden.

Hemmati’s biggest obstacle is the lack of interest by the majority of Iran’s electorate. They seem to have despaired of any real change in the Islamic Republic, at least in the near future. The US negotiating team, seemingly desperate for a deal — any deal — with the mullahs, could cause far less global damage if they despaired of it, as well.

Will Lebanon Fall into the Hands of Iran?

Will Lebanon Fall into the Hands of Iran? By Khaled Abu Toameh Originally Published by…

‘Saving Afghan Interpreters’ is a Scam That Would Bring 100,000 Afghans to U.S.

'Saving Afghan Interpreters' is a Scam That Would Bring 100,000 Afghans to U.S. Politicians put…

Mahmoud Abbas Prepares a List of Demands on Israel

Arabs Warn Biden: The War on Terrorism is not Over

Arabs Warn Biden: The War on Terrorism is not Over By Khaled Abu Toameh Originally…