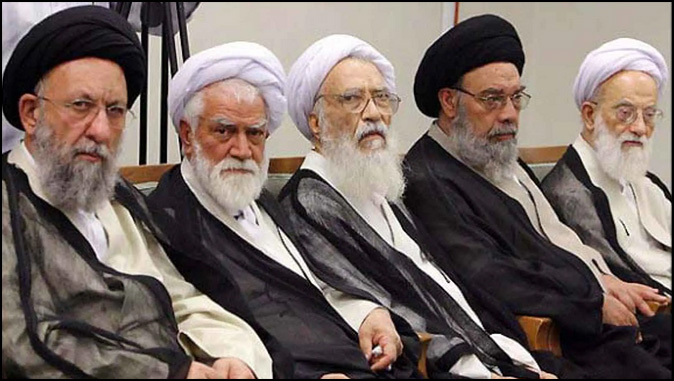 Iran Warns Saudi Arabia to Stop Reporting on Protests
Bluster away, Islamic Republic. Threaten all you want. It won’t help.
By Hugh Fitzgerald

The Iranians have just warned Saudi Arabia:to stop its reporting on the continuing protests in Iran, threatening severe consequences for the Kingdom. A report on the warning, and what Iran might have in mind by way of retaliation, can be found here: “Iran threatens Saudi Arabia over media coverage of protests -analysis,” by Seth J. Frantzman, Jerusalem Post, November 5, 2022:

Iran appears to be upping rhetoric against foreign media that it accuses of backing protests. The Iranian regime has faced protests now for more than a month and a half.

As Tehran considers that the protests will continue, it wants to find a way to shut off support that doesn’t involve a violent crackdown. This is because, although the regime has killed numerous protesters, it is trying to “manage” the protests, without the massacre of thousands.

More than 300 protesters have been killed so far, including 40 children and 24 women; the youngest was eleven years old. Tehran wants to manage the crisis, gradually hoping to wear down the protesters, in order to avoid having to face a full-scale revolt that might be set off, it fears, by a massacre. The regime has so far refrained from the kind of bloodshed that took place in 2019, when 1,500 protesters were killed.

Now the regime wants the foreign reporting to stop and it wants any media that is either in Persian abroad that backs the demonstrators, or dissident media, to feel they have been warned.

Towards that end, Iran’s pro-regime Tansim [sic] media, which is close to the IRGC, put out warnings against Iran International and Saudi Arabia. This isn’t the first time the regime has done this. It has accused Iran International, a critical media outlet, of being “terrorist media” and it has threatened Saudi Arabia numerous times since the protests began in late September.

According to the Tasnim report “Iran sent the message because Iran knows the satellite news channel, Iran International, is funded by Saudi Arabia.”

Iran International, which began to operate in 2017, is run by Iranian exiles in London. It broadcasts news in Persian about Iran worldwide and, especially, into Iran itself, where it has a 33% market share of the audience for independent media. It is owned by Volant Media. Corporate documents show that the major stockholder in the company originally, with 75% of its shares, was a Saudi national, Fahad Ibrahim Aldeghither, who was then followed as major stockholder by another Saudi national, Adel Abdukarim. No other owner’s name has been made public, but it is a safe bet that the deep-pocketed Saudis are backing Iran International as a way to undermine the Iranian regime, the Kingdom’s mortal enemy. And they are succeeding.

The report goes on to say that “the Saudis said in response that they have nothing to with Iran International and they disavowed this terrorist media. But we fully know the Saudi connection to Iran International. And we know that Saudi Arabia is the funding source for the anti-Iran measures and that this quasi-media is funded by Saudi Arabia.”

The Iranians for once are not lying. Saudis have been funding Iran International, which has turned out to be a great success in spreading news that has undermined the regime in Tehran.

Iran’s regime though is now hinting that “possible incidents” may happen to Saudi Arabia. This comes days after a video was released that showed a threatened attack by Iranian Shahed 136 kamikaze drones on the Shaybah energy complex in Saudi Arabia.

Back in August 2019 a similar attack by older types of Iranian drones targeted this site, it came a month before Iran also targeted Saudi Arabia’s Abqaiq energy facility.

The release of the video threatening an attack by Iranian kamikaze drones on the Shaybah energy complex in Saudi Arabia was meant to remind the Kingdom about the real, and not merely threatened, attacks by Iran on the Saudi Shaybah site, as well as that which, a month later, Iran launched against the Abqaiq energy facility.

These were important attacks on Saudi Arabia by Iran and they were designed to show Iran can threaten Saudi oil exports. This comes now as tensions rise between Russia and the West and energy prices are shooting up; therefore, Iran’s threats may be taken more seriously today.

Iran’s ally Russia would welcome such an attack on Saudi oil facilities, which if successful would lower Saudi production, raise the world price of oil, and increase the revenues of both Iran and Russia.

However, Iran’s threats today appear more like a mafia-style threat of “it would be a shame if something happened,” basically hinting that an “incident” may happen and Iran can’t control what might come next. Iran accuses Iran International, BBC Persian and Voice of America of stirring up the protests in Iran.

The Iranian threat to Saudi Arabia to stop funding Iran International will almost certainly fall on deaf ears, but in any case, even if the Saudis were for some reason to end their funding, the station is too important to be allowed to disappear; the American government would certainly step in to pay its bills. And Iran has nothing with which to threaten those other major sources of information for Iranians on their own country for Iranians – the BBC Persian Service, and the VOA’s Persian Service.

The IRGC will likely be behind any attacks that come in the next weeks. IRGC head Major General Hossein Salami said that Iran has warned the Saudi government that media backed by the Kingdom is trying to “provoke our youth with propaganda… Be careful of your behavior and control these media, otherwise, the smoke will be in your eyes. We will finish with you. You entered our internal affairs through these media, but know that you are vulnerable. We told you to be careful.”

The IRGC blusters, but how exactly does it expect to prevent others, including the American government and the EU, from funding Iran International if the Saudis stopped their own funding? It can’t be done.

Iran has hinted that it could try to empower “enemies” of Saudi Arabia in the region. Of interest here, Iran said that it might try to create controversies between Saudi Arabia and “Egypt, Iraq, Qatar, Oman and even the UAE.” Iran also hinted that Kuwait could be encouraged to turn on Riyadh.

More bluster. How does Iran propose to whip up Arab countries against their rich Arab uncle, the Kingdom of Saudi Arabia? What would make Egypt turn on Saudi Arabia, that this past March provided Cairo with $5 billion in aid? Why would Baghdad, when just last year the Saudis contributed $3 billion to an Iraqi development fund, now bite the hand that has fed it? Qatar can’t make trouble for Saudi Arabia; it does not want a return to that three-year blockade orchestrated by Riyadh that it finally managed to have lifted. For more than a decade, Saudi Arabia has been providing billions to Oman, sometimes directly, and sometimes via the Gulf Cooperation Council; again, there is nothing Iran can offer Oman that would make it turn on the Saudis. As for the UAE, Saudi Arabia has been its closest ally for decades; it would hardly want to disturb relations with its “older brother” in the Gulf.

Iran wants to exploit perceptions that Saudi Arabia is growing closer with Israel as a way to spread propaganda against Riyadh.

The report at Tasnim hints at disrupting oil exports from Saudi Arabia; encouraging the Houthis in Yemen to carry out new attacks, or other methods. Iran has also said that it has spoken with Iraqi officials to pass messages to the Saudis, to try to get anti-Iran media coverage to stop. Iraq has brokered Saudi-Iran talks over the last year.

If Saudi oil exports are disrupted by Iran, surely the Americans will respond by blockading Iranian oil tankers in the Gulf..As for Iran threatening to encourage attacks by the Houthis in Yemen, the Houthis need no encouragement; they are already doing their best to hold the Saudi-backed forces of the national government at bay. Iraq may have been a go-between brokering Saudi-Iran talks, but those talks, as this very report at Tasnim makes clear, have gone nowhere. Iran has gone back to the only language its rulers understand, and believe others understand — the language of threat.

Saudi Arabia is already under pressure because of tensions with the US administration. These tensions are ostensibly due to oil prices, but there is more to this.

The recent tensions between the Saudis and the U.S. arose from three things: the killing of Jamal Khashoggi, ordered by the Crown Prince; the “humanitarian crisis” in Yemen that the U.S. has blamed largely on the Saudi bombing of civilians; and finally, the cut in OPEC+ production that has led to a rise in the price of oil, and hence of gasoline at the pump, that the Bidenites know will hurt them in the mid-term elections. But Biden’s meeting this July in Jeddah with the Crown Prince showed he was ready to put the “pariah” business over Khashoggi’s killing behind him; the Bidenites have realized that the Houthis are just as responsible for the humanitarian crisis in Yemen as the Saudis; they have accepted the Saudi claim that the cut in oil production was not an attempt to retaliate against Biden because of his earlier “pariah” talk, but merely an “economic decision.”

Iran seems to be hinting that not only could it empower attacks on Saudi Arabia but that it will consider stirring up anti-Saudi voices, whether via Qatar or through other methods.

Clearly, Iran’s regime is worried or it wouldn’t be trying to suppress foreign media coverage. The regime shows how much it cares about reports abroad and it is now messaging that the regime will begin to retaliate.

Bluster away, Iran. Threaten all you want. It won’t help. If the Saudis sell off their holdings in Volant Media, that owns Iran International, then the deep-pocketed American government, directly or through intermediaries, will buy them. And there is nothing Iran can do to silence the Persian services of the BBC and the VOA. The protests have now entered their eighth week and show no signs of stopping. They are now being held in over 100 cities across Iran, and in 130 universities. More than 300 people have been killed, including 40 children and 24 women. Even the increasing use of live fire by the police and the Basij have not decreased the turnout. In the cities the security services may temporarily disperse crowds, but then the protesters quickly disappear, leaving the police and Basij running in circles and exhausting themselves trying to round up and arrest protesters. It’s a cat-and-mouse game that the mice are winning.