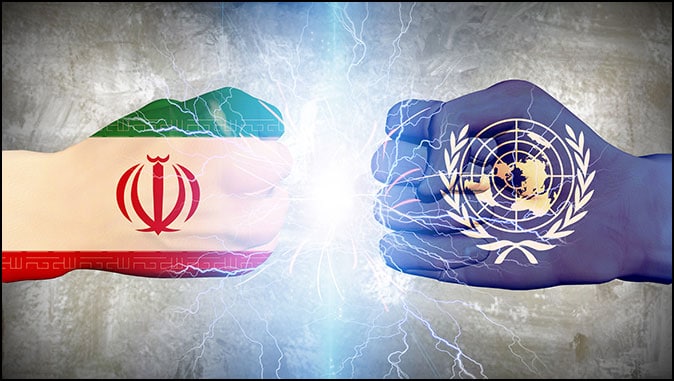 Iran Regime’s Hostage Taking: Where Are the West and the UN?
By Majid Rafizadeh

In the hope of resurrecting the disastrous Iran nuclear deal (Joint Comprehensive Plan of Action) and subsequently lifting sanctions on the ruling mullahs of Iran, the Biden administration and the European Union have been silent on the fates of foreign hostages kept in Iran’s notorious prisons.

Some of the foreign hostages in Iran come from Western countries, including the United States, France, Canada, Germany, the United Kingdom, and Australia.

Among the current foreign citizens currently held hostage in Iran is Nazanin Zaghari-Ratcliffe, a British mother, who, along with her then-22-month-old daughter, traveled to Iran in 2016 to visit her family for Nowruz, the Iranian New Year, after the nuclear deal had been reached and sanctions against the Islamic Republic had been lifted. As she was about to board a plane to return home to the UK, she was surrounded by officials of the Islamic Revolutionary Guard Corps (IRGC) and arrested.

Amid the ongoing nuclear talks between the Iranian regime and world powers, the IRGC’s court sentenced her to yet another year in prison in April 2021.

American citizens held as prisoners in Iran include Iranian-Americans Baquer and Siamak Namazi, Morad Tahbaz, and businessman and conservationist Emad Shargi. Shargi’s family has pleaded with the Biden administration to help free him. “Our family has been torn apart. My husband has been taken,” his wife, Bahareh Shargi, told “Face the Nation” moderator Margaret Brennan. Shargi’s daughter, Hannah, said:

“The image I’m just working towards is having him walk through our front door. Like, that is all I want. And that is what I dream about… him coming home, walking through the door, like, surprising us. And then I wake up, and it’s, of course, a dream.”

Imprisoning foreign nationals is generally under the control of Iran’s hardline judiciary system. The head of the judiciary, also known as the Chief Justice of Iran, is directly appointed by Iran’s Supreme Leader Ali Khamenei. The judiciary system, in other words, requires the Supreme Leader’s approval to make decisions about foreign prisoners and hostages.

It is no secret that Iranian authorities use foreign citizens as bargaining chips and pawns for extracting economic concessions or receiving political and financial gains, as well as to swap prisoners. This has been the policy of the theocratic establishment since the Islamic Revolution in 1979, starting on the first day of the establishment of the Islamic Republic with the US Embassy takeover in Tehran and 52 Americans being held hostage for 444 days.

The regime releases hostages only when it has achieved its political, economic and ideological objectives. The Obama administration, for example, transferred $1.7 billion in cash to Iran in exchange for releasing several Iranian-American citizens.

Currently, the regime most likely sees foreign nationals held in its detention as a powerful means of leverage to gain an upper hand in any nuclear talks.

Foreign nationals are also held in extremely difficult conditions. They generally have no access to due process, are routinely denied a lawyer, and are often held in solitary confinement. According to the Human Rights Watch report for 2021:

“The IRGC’s Intelligence Organization continues to arrest Iranian dual and foreign nationals on vague charges, such as ‘cooperating with a hostile state.'”

Recently, a hacking group calling itself Edalat-e Ali (Ali’s Justice) leaked videos of Iran’s prisons, some of which revealed abuse, including beatings and unspeakable treatment of detainees carried out by the authorities at the notorious Evin Prison, where political prisoners are held. “We will continue to expose the oppression,” that the Iranian government is “inflicting on people,” the group said.

Instead of appeasing the Iranian regime and turning a blind eye to its human rights violations, the West needs to hold the ruling mullahs of Iran accountable for detaining foreign nationals as hostages, bargaining chips and as pawns with which to extract political and economic concessions.