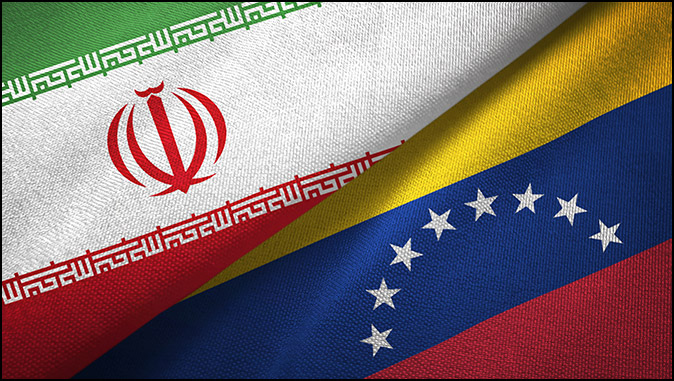 Iran Acquires 2.5 Million Acres of Venezuela
By Lawrence A. Franklin

Venezuelan President Nicolás Maduro this June during a visit to Iran signed a multidimensional, 20-year cooperation treaty. The pact includes agreements on science and technology as well as deals on agriculture, communications, culture and tourism. The Maduro regime’s startling provision of one million hectares (roughly 2.5 million acres; nearly 4,000 square miles) of farmland to Iran was kept under wraps until Iranian agrarian economist Ali Revanizadeh disclosed it to the Venezuelan media.

The land grant will ostensibly be used to grow staple crops, such as corn and soy beans, allowing water-starved Iran to better feed its population. Iran’s current use of Venezuela, however (here, here and here ), combined with Iran’s Islamic Revolutionary Guard Corps (IRGC), raise the possibility that Iran and its surrogate terrorist groups, such as Hezbollah and Hamas , might be using the vast acreage for military and terrorist operations.

Hezbollah already runs paramilitary training centers in restricted sections of Venezuela’s Margarita Island, a tourist area northeast of the country’s mainland. The terrorist group has considerable support from some of Venezuela’s prominent Lebanese clans such as the Nasr al Din family, who reportedly facilitated Iran’s penetration of Margarita Island. Intensive recruitment efforts by Shiite Islamic clerics among Venezuelans and elsewhere are have been known to include zealous converts to undertake revolutionary missions.

The Maduro regime has apparently been so welcoming to Iranian intelligence agents that some of Hezbollah’s long-established Latin American network at the tri-border nexus of Brazil, Argentina, and Paraguay has been overtaken by Hezbollah activities on Venezuela’s Margarita Island.

Iran’s alliance with Venezuela most importantly provides Tehran with opportunities to target US interests in Latin America and potentially the southern United States.

Iran, along with the Chinese Communist Party, is in the process of strengthening Venezuela’s military against the US, for instance by deliveries of military drones, which are also considered a threat by Colombia.

China, Russia and Iran were reported to be running military drills in Latin America last month. According to the Center for a Secure Free Society, this is a “strategic move that seeks to preposition forward deployed military assets in Latin America and the Caribbean.”

Iran and Venezuela began developing close links during the 2002-2013 tenure of Venezuelan President Hugo Chávez. Iran’s then President Ahmadinejad signed many bilateral agreements with Chávez, capped by Chávez’s visit to Tehran in 2010.

The US and some allies have challenged Venezuela’s cooperation with Iran. As early as 2008, Turkey seized 22 containers off an Iranian ship. Among the cargo were explosive materials, destined for Venezuela.

Iran also has exploited its close ties to Venezuela in order to legitimize the anti-US and anti-Israeli themes of Iran’s state-owned Spanish language television channel, HispanTV, broadcast throughout Latin America.

Iran, along with Venezuela, seems to be using its influence with other Latin American governments to develop an anti-US coalition in America’s backyard.

In addition, Iran sent a destroyer, the Sahand, and a support vessel — the intelligence-gathering Makran — to Venezuela in the spring of 2021. The Makran set sail on the mission “with seven high-speed missile-attack craft strapped to its deck,” according to a report published by the U.S. Naval Institute. The report continued:

“If the boats are delivered, they may form the core of an asymmetrical warfare force within Venezuela’s armed forces. This could be focused on disrupting shipping as a means of countering superior naval forces. Shipping routes to and from the Panama Canal are near the Venezuelan coast.”

Iran’s massive interference in Venezuela’s affairs should raise concerns about the hemisphere’s democracies and whether Caracas is still sovereign. The US and Latin American democratic states need to monitor how much Venezuelan sovereignty is being surrendered to authoritarian enemies of freedom.

Tehran initiated its ongoing trade in oil with Venezuela during Chávez’s reign. Both the Venezuelan and Iranian economies suffer from American sanctions. Consequently, they have found ways of diluting the effects of the sanctions by bartering in oil and foodstuffs. This pattern of fuel deliveries from Iran to Venezuela is occasionally thwarted. In 2020, for example, US ships halted four tankers in the Strait of Hormuz and seized oil bound for Venezuela.

Now, remarkably, the two countries’ cooperation involves the cession of Venezuelan national territory to the Islamic Republic of Iran.

Iran and Venezuela also appear to have established an air bridge between Tehran and Caracas. The flights are manned by Iranian crews and enable both regimes to maintain secrecy in the possible global transport of weapons and terrorist operatives. In May and June of this year, former IRGC/Quds Force aircraft flew several missions carrying only Iranian and Venezuelan nationals. One aircraft was a formerly Iranian-owned Boeing 747 with no cargo aboard.

While air and seaborne arms deliveries are high-profile evidence of Iran’s ties with Venezuela, Tehran’s cooperation with Venezuelan intelligence agencies, although less visible, is also intense. The Islamic Republic’s support for Hezbollah terrorist operations is pervasive throughout Latin America. Hezbollah recruits from Venezuela’s ten million strong Lebanese diaspora. Iran and Hezbollah cooperate in training of intelligence agents and in developing sources who reside in Venezuela and Colombia, as well as in the tri-border region of Brazil, Paraguay and Argentina.

Emanuele Ottolenghi, a specialist on Iranian and Hezbollah operations in Latin America, in testimony before the U.S. Congress, outlined Hezbollah’s links with major drug cartels to raise funds for Iranian-sponsored operations in the region.

Two other Venezuelan clans from Lebanon who are helping to expand Iranian influence in Latin America are the Rada and Saleh extended families. These networks have hooked up with local gangs and drug cartels, forging these groups into transnational criminal organizations. Their relationships have secured financially rewarding deals for Hezbollah, such as its trafficking in the amphetamine Captagon.

A Rada clan principal, Amer Mohammad Akil Rada, helped plan the terrorist bombings of the community center of Argentina’s Jewish social organization (AMIA) and the Israeli Embassy in Buenos Aires in 1994 and 1992, respectively. The Saleh Clan chiefly operates as a Hezbollah-associated terrorist and narcotics group across the Colombian-Venezuelan border. Hezbollah bases in Venezuela have facilitated intelligence networking in the Mideast as well, including enabling meetings of Venezuelan security officers with intelligence operatives in Syria.

This Iranian Hezbollah terrorist network in the region also has been one source of proselytizing efforts to convert Latin Americans to Iran’s version of Shia Islam.

One Shia cleric, Teodoro Darnott, a convert to Islam, identifies himself as the “Imam of Hezbollah in Venezuela.” Occasionally Iranians have been apprehended by US border guards illegally crossing America’s long, porous border with Mexico. These illegal aliens could be fulfilling passive missions such as manning Iran’s Hezbollah cells in the US, while others could be commissioned to execute intelligence or terrorist-support operations.

Venezuela’s comprehensive, invasive links with its authoritarian allies are continuing to challenge Maduro’s administrative control of his regime and the country’s territorial sovereignty.

Maduro’s links to Iranian intelligence agencies are additionally being used to execute operations inside the US. Iranian terrorists in mid-July had planned to kidnap anti-Islamic regime activist Masih Alinejad from her Brooklyn home, to then transport her by speedboat to Venezuela. Latin America’s Iranian Hezbollah network appears poised to strike democratic interests throughout the hemisphere.