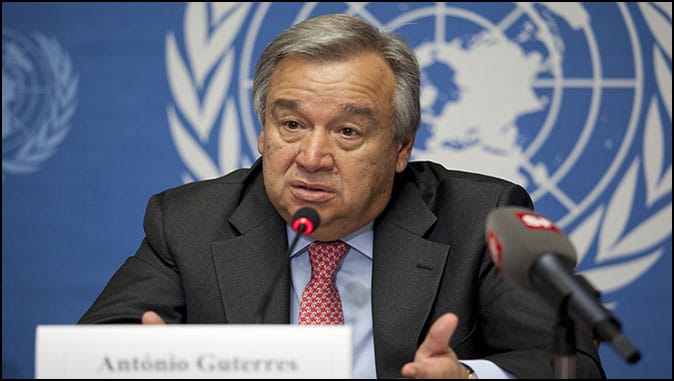 Giving Cover to Palestinian Extremists
The UN and other apologists who continue to enable Palestinian terror and lies.
By Joseph Klein

The executive director of the Council on American–Islamic Relations (CAIR) Nihad Awad, speaking at a panel that was part of the American Muslims for Palestine (AMP) annual conference in Chicago on November 27, 2021, demanded that the Biden administration move the U.S. Embassy in Israel back from Jerusalem to Tel Aviv. Adding insult to injury, Awad described Tel Aviv as “occupied,” but, he vowed, it “will be free later.”

AMP is an extremist pro-Palestinian group that promotes the anti-Semitic Boycott, Divestment and Sanctions (BDS) movement. There is “a significant overlap between AMP and people who worked for or on behalf of organizations that were designated, dissolved, or held civilly liable by federal authorities for supporting Hamas,” according to Jonathan Schanzer, Vice President of Research Foundation for Defense of Democracies. Schanzer testified about AMP and its radical agenda at a 2016 Joint Hearing before the House Foreign Affairs Committee Subcommittee on Terrorism, Nonproliferation, and Trade and the Subcommittee on the Middle East and North Africa.

The theme of AMP’s 2021 annual conference was “On the Road to Free Palestine.” In addition to Awad, other pro-Palestinian extremists who spoke at the hate Israel propaganda fest included Linda Sansour and Zarefah Baroud. The latter wrote an opinion piece earlier this year claiming that “racialized violence has always defined Israel,” which was posted last May on Hamas’s website.

But you don’t have to go to an American Muslims for Palestine conference to hear the vile rhetoric directed against the Jewish State of Israel and its supporters. All you need to do is to go to the United Nations.

United Nations Secretary General Antonio Guterres (pictured above) issued a statement on November 29th commemorating the “International Day of Solidarity with the Palestinian People.” He blamed Israel for the Palestinians’ self-inflicted plight. Guterres fed into the Palestinian victimhood narrative, claiming that “[P]ersistent violations of the rights of Palestinians along with the expansion of settlements risk eroding the prospect of a two-State solution.”

False. It is the rejectionism of the Palestinian leaders and their enablers, starting with their refusal to accept the UN General Assembly’s original two-state partition plan in 1947, and lasting to the present day, that is responsible for the Palestinians’ failure to achieve their aspiration for an independent state. By rejecting the idea of living side by side under secure and durable peace terms with the Jewish State of Israel, the Palestinian leaders and their enablers have nobody but themselves to blame for the decades-old stalemate and violence.

The United Nations further amplified its hate Israel message with a series of General Assembly anti-Israel resolutions it approved on December 1st as part of an annual group of resolutions known as the “Palestinian Package.” One of these resolutions, which deals with Jerusalem, deletes the original Jewish name “Temple Mount” from Judaism’s holiest site and calls the site only by its Muslim name “Haram al-Sharif.”

Israel’s ambassador to the United Nations, Gilad Erdan, rightly condemned the UN General Assembly for rewarding the Palestinian leadership’s rejectionism. “The hypocrisy of these resolutions is truly outrageous. A resolution about Jerusalem that does not refer to its ancient Jewish roots is not an ignorant mistake, but an attempt to distort and rewrite history!” Ambassador Erdan said.

In his remarks to the General Assembly before the votes on the anti-Israel resolutions, Ambassador Erdan noted the recent “act of terror” in Jerusalem that killed a 26‑year-old Jew who had emigrated to Israel from South Africa. Four others were wounded in the terrorist attack.

The slain individual’s “only crime was being a Jew in the Holy City,” Ambassador Erdan said. He added:

“And while this horrific act of terror devastated families and destroyed lives, the Palestinian Authority and President Abbas have not even bothered to condemn it. Do you know why? Simply because they are not interested in reconciliation. All the Palestinian leadership is interested in is promoting violence and incitement, while attempting to erase the connection between Jerusalem and the Jewish people. Spurring a culture of hate and incitement against Israel is more important to Palestinian leaders than improving the quality of life of their own citizens. The Jewish blood has barely dried, and you have the audacity to single out Israel for violence in Jerusalem?”

The Palestinian terrorist, who was killed in a shootout with the police, was affiliated with Hamas. Praising its loyal killer, Hamas “celebrated” the latest murder of an Israeli civilian by handing out sweets to Palestinians in the Gaza Strip that Hamas has turned into its own occupied terrorist sanctuary. The Palestinian Authority will no doubt give money to the dead terrorist’s family as part of its “pay to slay” policy.