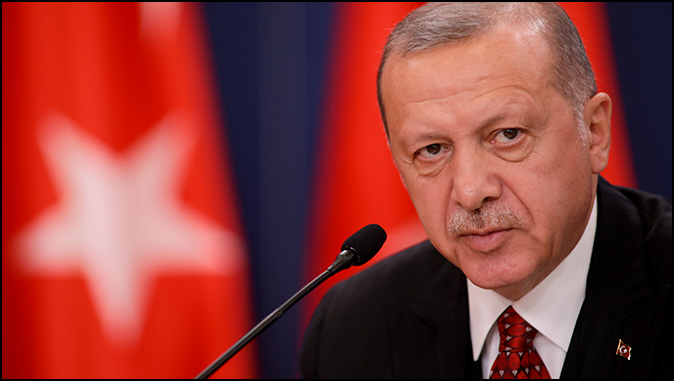 Recep Tayyip Erdogan, whose relations with Israel are an unsteady whirligig, up, down, and around and where it will stop nobody knows – has now let loose with a barrage of criticism against Israel for its just-completed Operation Breaking Dawn. This comes after many months when Erdogan had been reaching out to Jerusalem, in the hope both of establishing an agreement with the Jewish state on gas fields and maritime economic zones in the eastern Mediterranean, and on promoting Turkey as a way-station for Israeli natural gas being sent to Europe. During that honeymoon, Erdogan hosted Israeli President Isaac Herzog, and spoke of cooperation on energy with Israel.

Speaking on Sunday ahead of the announcement of a ceasefire in the fighting, Erdogan told a group of foreign ambassadors at his residence that he had taken “a clear stance against the attacks by Israeli security forces targeting Gaza and Gazan civilians.”

Describing the Al-Aqsa Mosque in Jerusalem as “our red line,” the Turkish leader declared: “There is no excuse for killing children, babies in swaddling clothes. Turkey stands by the Palestinian people and their Gazan brothers.”

Israel’s campaign to prevent Palestinian Islamic Jihad terrorists from attacking Israeli civilians had nothing to do with Al-Aqsa Mosque. Al-Aqsa is always brought up by assorted Muslim leaders to whip up their followers into a hysterical frenzy, as Erdogan was attempting here. Nothing has changed on the Temple Mount; the status quo remains, which prohibits Jewish visitors from bringing prayer books or tefillin to the Mount, where they are still prohibited from saying prayers either aloud or silently mouthing them. Erdogan chooses to ignore Israel’s determination not to offend Muslim sensibilities on the Temple Mount, even at the cost of preventing Jewish prayer at the holiest site in Judaism.

The IDF estimated Monday that about 51 people were killed in Gaza during the three-day round of hostilities, including 24 affiliated with the Islamic Jihad.

Of the 27 civilians killed, an IDF spokesperson said that 15 were killed by errant rockets fired by Palestinian militants that fell short within the enclave. The military has released footage of one particularly deadly explosion in the Jabaliya refugee camp that killed several civilians, including four children, which was caused by a failed PIJ rocket.

The release by the IDF of the footage showing clearly that a PIJ rocket had misfired and landed in the Jabaliya camp, killing civilians, including at least four children, should have been enough to convince the media that some of the civilian casualties were caused by the PIJ’s own rockets, falling short and landing in Gaza. About 200 of the 1,100 rockets fired by the PIJ are known to have landed in Gaza, though the exact number of civilians they hit is not known and certainly will never be released by the PIJ. But some Palestinians in Gaza have now dared openly to complain about the civilians killed by the PIJ’s rocket misfirings, and have said they are sick and tired of the war the PIJ has brought upon them. The IDF, which has a habit of telling the truth, insists that more civilians were killed by PIJ’s misfired rockets than by the IDF.

During previous upsurges of fighting between the IDF and Islamist groups in Gaza, Erdogan has frequently accused Israeli forces of deliberately killing Palestinian children. In 2019, during clashes on the Temple Mount in Jerusalem, Erodgan slammed then Israeli premier Benjamin Netanyahu as a “tyrant who massacred seven-year-old Palestinian children.” In May 2021, Erdogan earned a rebuke from the US State Department for his “reprehensible antisemitic comments” when he denounced Israeli as “murderers [who] kill six-year-old babies, murderers [who] make women crawl on the ground.”

In the 2021 Gaza war, Israel made endless efforts to minimize civilian casualties, while Hamas did everything to maximize them, by placing its weapons and rocket launchers inside, or next to, civilian structures, including kindergartens, schools, hospitals, even mosques, where it hoped Israel would strike and cause civilian casualties that could then be used in a propaganda campaign against the Jewish state. Meanwhile, Israel did everything it could to minimize harm to civilians by warning them away in time from sites about to be targeted, using telephoning, leafletting, emailing, and the “knock-on-the-roof” technique. Erdogan knows of this Israeli practice of warning civilians, but chooses to ignore it. And he knows that the same extensive effort by Israel to warn civilians to leave areas about to be targeted were made during Operation Breaking Dawn.

In recent weeks, Israeli-Turkish relations have thawed against the background of a visit to Ankara by Israeli President Isaac Herzog. Following their discussions, Erdogan affirmed his desire to retain ties with Israel, arguing that “strong relations with Israel are key to defending Palestinian rights.”…

“Israel has martyred innocent Palestinian children, women, civilians and many people, as they have done before, in front of the whole world. In fact, what they are doing under the name of a [anti] terrorist operation is the practice of a terrorist state,” Numan Kurtulmus stated over the weekend.

“The world should at least stop the consequences of these policies that aim to drive the Palestinians out of their homes and their ancestral lands, which is a state policy of Israel and does not recognize the Palestinians’ right to life,” Kurtulmus said.

Israel is not trying to drive the Palestinians out of either Gaza – where not a single Israeli has lived since 2005 — or out of the West Bank, where the Palestinians govern themselves in Areas A and B. Alas, they do not enjoy the rights that Israeli Arabs possess. Instead, they are ruled by the corrupt and thieving PA rulers, led by. Mahmoud Abbas, whose despotism they have endured for 17 years, without any prospect of elections to remove him. The Palestinian population in both Gaza and the West Bank has steadily increased since 1967, undermining the claim of an Israeli “state policy” to “drive the Palestinians out of their homes.” There is not, of course, any such policy. Erdogan’s mind cannot bear too much reality.

A few months from now, as Turkish temper tantrums die down over Operation Breaking Dawn, Erdogan is likely to again return to his previous charm offensive toward Israel. He wants to establish a Turkish-Israeli understanding on maritime economic zones in the Mediterranean. He also would like Israeli gas, which according to present plans is to be sent to Egypt, where it will be turned into LNG, and then sent northward, via Greece, to Europe, to instead be sent from Egypt to Turkey, where the liquefied natural gas will be changed back into a gas before being sent by pipeline to Europe. Finally, Erdogan sees improved ties with Israel as helping Ankara in Washington, where the Turks believe Israel’s political power is great; he would like it to be employed on Turkey’s behalf as well. On this, he has a point. Let’s hope he doesn’t forget it.