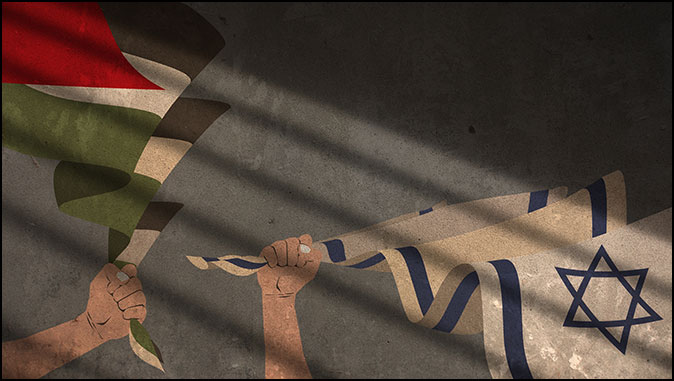 On April 5th, the undergraduate student government at Ohio State University passed what it categorized as an “emergency resolution,” asking the university to divest from Hewlett Packard and Caterpillar, Inc., and claiming that “by investing in such companies, The Ohio State University implicitly condones and profits from the decisions and actions of these companies, and, as such, becomes guilty by association…, including, but certainly not limited to, the killing of innocent civilians.”

At Princeton University, the Princeton Committee on Palestine (PCP) sponsored “Referendum Resolution 2-2022” that does not, like the Ohio State vote, include Hewlett Packard as a target of divestment but similarly calls on Princeton to “immediately halt usage of all Caterpillar machinery in all ongoing campus construction projects given the violent role that Caterpillar machinery has played in the mass demolition of Palestinian homes, the murder of Palestinians and other innocent people, and the promotion of the prison-industrial complex (among other atrocities).”

The Princeton Committee on Palestine is the University’s own version of the toxic Students for Justice in Palestine (SJP), the rabidly anti-Israel student group responsible for most of the campus activism against the Jewish state. So, it is no surprise that this referendum is peppered with the counter-factual, demonizing language of social justice, oppression, victimization, and Jew-hatred.

“Caterpillar is one of the largest construction manufacturing companies in the world,” the referendum reads, “and its machinery is routinely used for violent, inhumane, and despicable purposes.” Not coincidentally, these activists have specifically targeted Caterpillar because the company “is listed as one of the only targeted construction companies in the national Boycott Divestment and Sanctions (BDS) movement,” a toxic and ongoing campaign against Israel that student groups such as PCP promote as part of the vilification and demonization of Israel.

The referendum proposes “that the undergraduates call on the Princeton University administration to immediately and permanently halt usage of Caterpillar manufacturing equipment in every ongoing University construction project,” but it is unclear how prohibiting Caterpillar machinery from moving dirt on the bucolic Princeton campus will improve the daily lives of Palestinians and help them in their purported quest for self-determination and statehood.

It is obvious that these virtue-signaling students can easily live in a world without heavy machinery; they are less likely, for instance, to call for divestment and a ban on Israeli-developed technology used in their cell phones and computers, but that type of activism requires a genuine commitment and personal suffering that students and faculty in the safe and comfortable confines of a university lounge would rather avoid.

More importantly, in almost every instance when students have asked university leadership to divest from companies doing business with Israel, or to boycott Israeli products, or even to institute an academic boycott that would bar Israeli scholars from contributing to or participating in research, teaching, and publishing with their American counterparts, administrators have politely, but firmly, refused to participate.

So, if Princeton President Christopher L. Eisgruber decides not to ban Caterpillar equipment to be used for ongoing work on his campus, will the anti-Israel group’s work to push for divestment have been futile? Not exactly, which is the precise point. In the end, anti-Israel activists do not really care if a call to boycott or divest is successfully initiated, or if Israeli scholars are purged from academia, or if Caterpillar tractors are banned from the Princeton campus. What is important, what is successfully achieved in each of these tactical assaults as part of the cognitive war against Israel is that activist students have yet another opportunity to publicly catalog the long list of alleged offenses being committed by the Jewish state,

At Princeton, even woke Jewish students got in the act by writing an opinion piece in The Daily Princetonian where they used the “as Jews” approach to supporting Palestinian solidarity while joining the anti-Israel chorus of the usual suspects who drive and sponsor the BDS campaign.

Referring to themselves as the Alliance of Jewish Progressives, the authors of the noxious piece disingenuously used their Jewishness as a cover for some of the allegations from critics of the referendum who noted that, as has been documented by the AMCHA Initiative and others who track anti-Semitism on campuses, BDS activity on a campus — and especially when orchestrated by SJP or other anti-Israel groups — frequently creates a hostile climate for Jewish students and often manifests itself as raw anti-Semitism. In fact, as one AMCHA report noted, “the consideration of anti-Israel divestment resolutions in student government or by the student body was strongly linked to a surge in antisemitic activity.”

But these virtue-signaling Jewish students would have none of that. Knowing that critics of the referendum understand that such campaigns are based on and inspire anti-Semitism because they target only Israel and hold Israel to a standard not demanded of other countries who behave even more poorly, the Jewish progressives proclaimed, defensively, that they “reject the idea that the PCP referendum is motivated by antisemitism or is itself antisemitic. Criticisms of the State of Israel, including anti-Zionism and the BDS movement, are not inherently antisemitic. Nor is solidarity with the Palestinian people.” But when Israel-haters, as these students did, contend that companies like Caterpillar “are complicit in racist, settler-colonial violence,” they expose their naïve and biased view that Israel is somehow illegitimate, that it is nothing more than a colonial outpost of some European country that has been settled and occupied by racist oppressors who brutally suppress Palestinian self-determination.

More serious is the fact that these self-identified Jewish progressives purport to be more concerned about the Palestinian cause than they are about protecting their fellow Jewish students from harassment and invective for their support of Zionism and Israel. “We do not believe that advocating for Palestinian liberation is a threat to Jewish safety,” they wrote, suggesting, contrary to evidence, that campaigns in support of the Palestinian cause do not increase the likelihood of anti-Semitic behavior or expression, “nor do we believe that Jewish safety is dependent upon Palestinian dispossession.”

Of course, anti-Israel activism on campuses like Princeton is not actually about helping the Palestinians avoid “dispossession,” whatever that means, It is not designed to help the Palestinians moderate their violence toward Israeli Jewish civilians; to end incitement; to encourage the Palestinians to not teach their children to loathe and wish to kill Jews from the time they are in kindergarten; to accept the frequent offers of statehood that they have repeatedly rejected; or to urge the Palestinian leadership to abandon their maximalist demands and give up the fantasy that the established and viable state of Israel will somehow be extirpated and that Palestine will be liberated, will be free. No, being pro-Palestinian on campus, by definition, only means being anti-Israel, relentlessly campaigning against the Jewish state and proclaiming its many alleged predations, and the BDS movement is the core tactic by which that activism manifests itself.

Referendums like the present Princeton divestment example are yet another cognitive assault against Israel, with activists not really caring one way or another whether a university divests from a company doing business with Israel, or an Israeli academic is barred from teaching in the United States, or CUNY School of Law student activists encourage their peers to “Demand that Zionist professors are not allowed on your campus” and to “Demand that Zionist students are not in spaces where Palestinian students are.”

In their fantasy world where social justice is realized, no Caterpillar bulldozers will exist, Palestine will be liberated, and Israel will disappear, but, absent that, their loathing of Israel and Zionism is so pervasive and fundamental to their existence that it is emotionally and morally satisfying for them merely to prolong their campaign of slanders, libels, and lies about Israel and its supporters, regardless of how this activism affects Jewish students who may or may not even support or care about Israel.

Roughly a quarter of Caterpillar’s $5 billion annual revenue is earned in Asia, with China being the largest portion of that market segment. Had the sponsors of this bigoted referendum included China’s use of Caterpillar machinery in the oppression of its Uyghur Muslims who are imprisoned, subjected to forced labor, and oppressed in concentration camps, or the company’s sales to other despotic regimes and nations, then it might indicate that it was proposed out of goodwill and actual concern for human rights. But the fact that the sponsor specified the anti-Semitic BDS campaign as one of the justifications for the referendum reveals that this actually has little to do with Caterpillar and everything to do with a targeted, poisonous animus toward the Jewish state.

Two Princeton students, both members of the pro-Israel group Tigers for Israel, wrote an insightful opinion piece in The Daily Princetonian concerning the referendum in which they called on their fellow students to find alternate ways to debate the Israeli/Palestinian conflict. “Instead of supporting a resolution that is rooted within a bigoted global movement,” they wrote, “we ought to cultivate a Princeton campus where all students can safely cherish their identities and express their sentiments; where we collectively engage in a discourse free of hostility and intimidation; and where we sustain a positive environment for ourselves and future generations of Princeton students.”

Progressive profess to be tolerant, wise, and morally generous, but in their activism on behalf of the long-beleaguered Palestinians, they have revealed that while they purport to seek justice in Palestine, it is only justice for the Palestinian. For Jews, either on the Princeton campus or in Israel, there is no concern whatsoever, and if Jews must suffer and be threatened in pursuit Palestinian self-determination, that is a price progressives and Jew-hating activists are quite willing to let them pay.

Richard L. Cravatts, Ph.D., a Freedom Center Journalism Fellow in Academic Free Speech and President Emeritus of Scholars for Peace in the Middle East, is the author of Jew-Hatred Rising: The Perversities of the Campus War Against Israel and Jews.