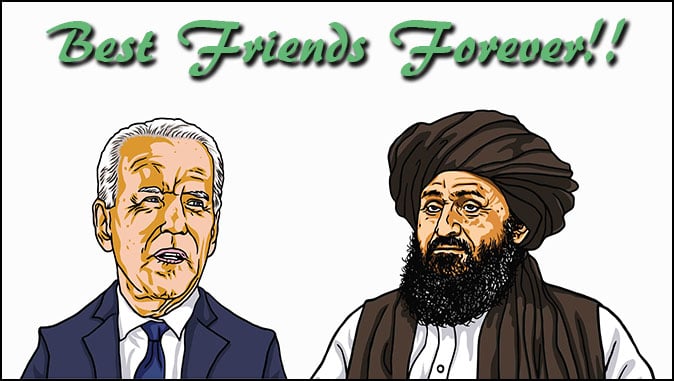 Biden’s Dirty Deal With the Taliban
Biden abandoned Americans to protect his deal with the Taliban. The deal isn’t over yet.
By Daniel Greenfield

Daniel Greenfield is a Shillman Journalism Fellow at the David Horowitz Freedom Center whose work focuses on the Left and Islamic terrorism.

Every week new revelations arrive about the scale of Biden’s betrayal in Afghanistan. After months of claiming that only a few hundred Americans had been abandoned behind enemy lines, the real numbers are still growing. Shocking reports continue to come to light including a military memo which claims that over a hundred family members of servicemen may still be trapped under Taliban rule.

Biden and his brass promised an accounting, but have offered only lies and excuses. Congressional hearings have produced nothing except cable news theater. While the Taliban throw parades showing off captured American military equipment, the Biden administration is dispatching $144 million in aid.

With more to come.

The humiliating collapse in Afghanistan is not a mystery. It was the product of a deliberate strategy to maintain relations with the Taliban at any cost. Every step of the disaster was really a betrayal.

Why did the Biden administration abandon Bagram Air Base and the nearby prison facility holding thousands of Taliban, Al Qaeda, and ISIS-K prisoners without notifying the Afghans?

When the Taliban repeatedly violated their agreement to stop the violence, why did the Biden administration still insist on keeping our side of the agreement, withdrawing by the deadline even if it meant leaving Americans behind?

When the Taliban offered to let the United States hold on to Kabul for the duration of the evacuation, why did the Biden administration refuse and allow the Jihadis and their Al Qaeda allies to take over the city and maintain the checkpoints through which Americans and Afghans had to pass to the airport?

Why is there still no official determination about the role that the Haqqani Network, Taliban allies of Al Qaeda, played in enabling Islamic terrorists to make it through their checkpoints with heavy weaponry and bomb vests to carry out attacks, resulting in the murder of 13 American military personnel?

Why did the Biden administration hand over lists of allies to the Taliban and delay going out into Kabul to rescue Americans? Why, even now, does it continue to repeat the same lies that only a handful of Americans were left behind and that the Taliban were helpful and cooperative during the evacuation?

The common denominator for all of them is that the Biden administration prioritized diplomatic relations with the Taliban over the lives of Americans and our national security. It’s why the Biden administration continues to engage diplomatically with the Taliban, directing aid to Afghanistan, and negotiating the release of the Americans whom they had previously claimed didn’t want to leave.

The Biden administration withdrew our military presence to win the trust of the Taliban. It only brought back enough troops when the Taliban made it clear that the terrorist network had no interest in any kind of diplomatic solution. Even then, Biden and his people went to great lengths to avoid offending the Taliban, not to protect Americans, whom they abandoned anyway, but to protect the larger diplomatic relationship with the Taliban which had always been their true priority.

The Biden administration labored during the evacuation to avoid offending the Taliban, describing them as partners, lying about Taliban assaults on Americans, and continuing to lie even now about the actual number of Americans trapped in Afghanistan. It’s also lying about the “humanitarian aid” it’s dispatching to Afghanistan, claiming that it will not benefit the Taliban, when it knows that it will.

All of this has significant implications for more than just the Americans still trapped in Afghanistan.

Afghanistan is once again becoming a terror hub. The revival of Al Qaeda is inevitable, and the fighting between ISIS-K and the Taliban (actually a battle between factions of the Taliban’s Haqqani Network and their foreign backers in Pakistan and the Middle East) is underway. The actual stakes are whether the Taliban will side with or against Iran and the tactics are suicide bombings aimed at Shiites.

Can the Biden administration be trusted to tell the truth about its old Taliban allies?

The Biden administration was more invested in a deal with the Taliban than in protecting Americans in Afghanistan. Is there any reason to think that it would put our national security ahead of its deal now?

The Islamic terrorist attacks of September 11 were the result.

Two decades later there is no reason to think that the Democrats have learned the folly of trusting the Taliban. Not when they left a massive embassy in Kabul behind after the military withdrawal on the assumption that the Taliban would keep the deal that they had spent the past months breaking.

The more the Taliban violated their agreements, the more determined the Biden administration became to keep its side of the bargain. This is the same phenomenon that we have seen before with Obama and the Iran nuclear deal, and with the PLO and Hamas terrorists waging war on the Jewish State.

Even after the evacuation, the Biden administration is back to cutting secret deals with the Taliban and providing them with secret payoffs. Whatever dirty deals have been made, the Taliban will not keep. And it’s vital that the details of all such arrangements be revealed and made public as soon as possible.

The large amounts of weapons and intelligence materials left behind by Biden, combined with the growing number of terrorists in Afghanistan pose an urgent threat. An it’s a threat that we can expect the Biden administration to continue lying about in order to protect its arrangements with the Taliban.

Nasrallah Once Again Provoking War With Israel What a ruined Lebanon will mean. By Joseph…

IDF Strikes Back at Palestinian Jihad

IDF Strikes Back at Palestinian Jihad Is Israel preparing for a longer campaign in Gaza?…