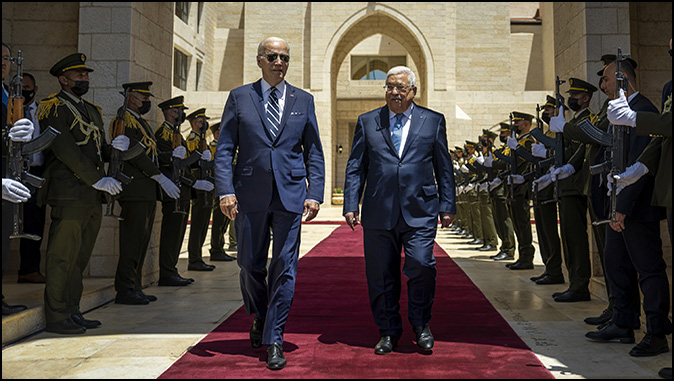 Biden Says Israel Has Right to Defend Itself, Except When It Does
Joe’s twisted idea of peace in the Middle East.
By Robert Spencer

Old Joe Biden’s White House issued a statement online, purportedly from Biden himself, on Sunday regarding the latest conflict between Israel and Palestinian Islamic Jihad forces in Gaza. Judging from its nearly flawless syntax and absence of broken sentences and malapropisms, however, this statement isn’t one that Dementia Joe actually read but which his handlers prepared to go out under his name. And since his handlers are staunchly and fanatically anti-Israel, the statement both affirms Israel’s right to defend itself and then immediately undercuts that right.

The statement goes on to affirm the Biden administration’s still-existing alliance with Israel:

My support for Israel’s security is long-standing and unwavering—including its right to defend itself against attacks. Over these recent days, Israel has defended its people from indiscriminate rocket attacks launched by the terrorist group Palestinian Islamic Jihad, and the United States is proud of our support for Israel’s Iron-Dome, which intercepted hundreds of rockets and saved countless lives. I commend Prime Minister Yair Lapid and his government’s steady leadership throughout the crisis.

But immediately after affirming Israel’s right to defend itself, Biden’s amanuensis took it away:

The reports of civilian casualties in Gaza are a tragedy, whether by Israeli strikes against Islamic Jihad positions or the dozens of Islamic Jihad rockets that reportedly fell inside Gaza. My Administration supports a timely and thorough investigation into all of these reports, and we also call on all parties to fully implement the ceasefire, and to ensure fuel and humanitarian supplies are flowing into Gaza as the fighting subsides.

Now, wait a minute. A timely and thorough investigation of what, exactly? The Gaza jihad groups’ use of civilians as human shields is abundantly documented. Even the inveterately anti-Israel United Nations has admitted it. Israel’s Deputy Religious Affairs Minister Matan Kahana stated Sunday: “Don’t believe the lies. I saw with my own eyes how the terrorist organizations launch rockets from densely populated civilian areas toward the cities of Israel. These war criminals use their women and children as human shields while they shoot at our citizens. We will continue to strike our enemies.”

Biden’s one-step-forward, two-steps-back statement continued: “As I made clear during my recent trip to Israel and the West Bank, Israelis and Palestinians both deserve to live safely and securely and to enjoy equal measures of freedom, prosperity, and democracy.”

Equal measures of freedom? Sure. The problem with that, which neither Biden nor his handlers have ever acknowledged, is the genocidal jihadi intransigence of the Palestinian side, which will never allow Israel to live in freedom and peace as a Jewish state. As The Palestinian Delusion documents, the Qur’anic imperative to “drive them out from where they drove you out” (2:191) foredooms any actual “two-state solution,” for, despite the fact that the claim that the Israelis drove the Palestinians off the land is more fiction than reality, it is widely accepted among Palestinians and has become the pretext for the ongoing jihad against Israel.

Equal measures of prosperity? This, ladies and gentlemen, is pure and open Marxism, ostensibly coming from the alleged president of the United States. The Palestinians would be a great deal more prosperous if Palestinian leaders weren’t kleptocrats who are almost as corrupt as Old Joe Biden himself, and if they didn’t devote so much of the billions they receive from the EU, the UN, and the U.S. to their jihad against Israel, rather than to the well-being of their own people.

But even if the Palestinian leadership were as honest as the day is long, the only way to ensure that they become as prosperous as the industrious, innovative, and tireless Israelis would be to confiscate funds from those who have earned them and award them gratuitously to those who have not. Since Biden’s handlers are busy doing that in the United States, it’s no surprise that they would want to do it in Israel as well.

Equal measures of democracy? Israel is about to hold its fifth election in less than four years; Palestinian Authority President Mahmoud Abbas, meanwhile, is in the seventeenth year of the four-year term to which he was elected in 2004. The Palestinians blame the Israelis for that along with everything else, but nothing has really prevented them from holding new elections except their own ruling kleptocrats.

How does Old Joe propose to make sure Israel and the Palestinians have equal measures of democracy? His ghostwriter didn’t say. But one thing is certain: if Joe can find a way to penalize the Israelis in order ostensibly to ensure this Palestinian “democracy,” he’ll happily go that route.