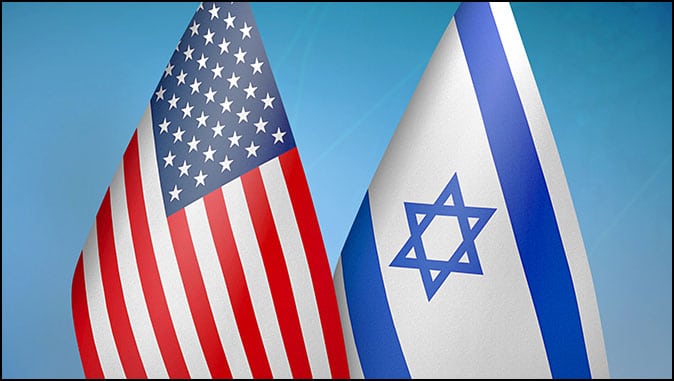 Biden Administration Will Push to Squeeze Israel Within 1949 Armistice Lines
With a $15-million aid package to the Palestinians.
By Hugh Fitzgerald

The Biden Administration intends to squeeze Israel back within the 1949 Armistice Lines. A report on this monumental folly is here: “Internal Biden memo said to back 2-state solution along 1967 lines,” by Jacob Magid, Times of Israel, March 17, 2021:

The Biden administration will reportedly push for a two-state solution based on the pre-1967 lines, with mutually agreed upon land swaps, reinstating US policy on the Israeli-Palestinian conflict to more traditionally held positions than those of former president Donald Trump.

A memo titled “The US Palestinian Reset and the Path Forward,” which was revealed Wednesday to the Abu Dhabi-based The National, also showed that the Biden administration is planning on announcing a $15 million aid package in coronavirus-related humanitarian assistance for the Palestinians as early as this month.

If the Biden Administration gives the Palestinians a $15-million aid package for coronavirus assistance – or gives the PA any aid package, for any purpose – it will be violating the Taylor Force Act, which forbids any American aid being given to the PA as long as its “Pay-For-Slay” program is in force. The PA not only continues with that program, but just announced a 50% increase in the amount it will provide the terrorist who murdered five members, including two small children and a baby, of the Fogel family. The PA may try to repackage “Pay-For-Slay” as aid innocently provided based on economic need, and not as a reward for terrorist acts, but as long as PA stipends are provided to terrorists and their families, however that aid is deceptively labelled, the real purpose of those stipends – to both reward and to incentivize terrorism – will be obvious, and Congress should not let the Biden Administration pretend that the Taylor Force Act does not apply.

Drafted by Deputy Assistant Secretary for Israeli and Palestinian Affairs Hady Amr, the memo also details plans to roll back various Trump policies that Washington believes made reaching a two-state solution more difficult, such as US legitimization of the settlement enterprise.

What will keep the peace between Israel and the Palestinians is not a “two-solution” based on a treaty. The Palestinians take as their model of treaty-making the Hudaibiyya Agreement that Muhammad made with the Meccans in 628 A.D. That “truce” was to have lasted 10 years, but after only 18 months, realizing his army had grown stronger, Muhammad violated the treaty and attacked the Meccans. This has been the model of all subsequent treaty-making by Muslims with Infidels. What will keep the peace between Israel and its Arab neighbors is what kept the peace between the West and the Soviet Union during the Cold War – the strategy of deterrence. As long as Israel remains, and is seen to be, militarily much stronger than its potential enemies, the Jewish state will be able to keep the peace.

To that end – of keeping the peace through deterrence – Israel has to retain certain territories, including the Jordan Valley and the Golan Heights. This is not only the unanimous opinion of Israel’s military, but was also the conclusion of the Joint Chiefs, in a report they prepared for President Johnson in 1967, on what territories — that Israel had won in the Six-Day War — it needed to keep for security reasons.

Amr recommends in the memo that the White House back a two-state framework “based on the 1967 lines with mutually agreed land swaps and agreements on security and refugees.”

While behind closed doors, Prime Minister Benjamin Netanyahu has participated in peace negotiations based on the 1967 lines, publicly the formula is not very popular in Israel, particularly among the right wing, which is expected to further expand in the Knesset after next week’s election.

This is a meretricious attempt by Hady Amr to suggest that even Netanyahu was willing to engage in negotiations “based on the 1967 lines.” It’s false. During his decades in public life, Netanyahu has always rejected anything like those “1967 lines” as a basis for negotiations. He may have been physically present in the room when such a proposal was brought up by the Americans, but he would not have “participated” in any way other than to flatly reject such a possibility.

The memo discusses “rolling back certain steps by the prior administration that bring into question our commitment or pose real barriers to a two-state solution, such as country of origin labeling.

The memo was referring to a last-minute policy change announced by Trump’s secretary of state Mike Pompeo, which requires all US exports from the settlements to be labeled as having been “made in Israel.”…

In requiring exports from Israeli towns and villages (i.e., “settlements”) in the West Bank to be labelled as “made in Israel,” the Trump Administration was quite properly helping to legitimize those places as part of Israel. It is this that the Biden Administration is now trying to undo. It wants to impose a clear demarcation between Israel in its pre-1967 lines – lines which only reflect where the armies of each side stood when the shooting stopped in 1949, and were never meant to be permanent borders – and the new territories that Israel won in the Six-Day War. In so doing, the Biden people are ignoring the Palestine Mandate, and the territories assigned by it to the future Jewish state, which included the entire West Bank. They are also ignoring U.N. Resolution 242, which allows Israel to keep territories won in that war which it needed to retain if it was to have “secure [i.e., defensible] and recognized boundaries.”

“As we reset US relations with the Palestinians, the Palestinian body politic is at an inflection point as it moves towards its first elections in 15 years,” the new memo reads. “At the same time, we [the US] suffer from a lack of connective tissue following the 2018 closure of the PLO office in Washington and refusal of Palestinian Authority leadership to directly engage with our embassy to Israel.”

This election announced by the Palestinians should be taken with a shaker of salt. It is not a hopeful sign of a sudden embrace of democracy by Mahmoud Abbas. The elections – both parliamentary and presidential – were called by Abbas as a way to impress the Biden Administration with Abbas’ democratic evolution. He has, in the meantime, managed to ensure that he will have no serious rivals, and will remain, now 16 years into his 4-year term, President-For-Life. He has attacked Nasser al-Kidwa, Arafat’s nephew, for daring to field his own list, separate from that of Fatah, of candidates for Parliament. He’s cut off all funding for the Yasser Arafat Foundation, where Al-Kidwa has his sinecure, as a way to punish him for daring to take democratic elections seriously.

Abbas has also obtained a promise from Hamas that it will not field its own candidate in the Presidential race. That removes Hamas leader Ismail Haniyeh as a possible rival candidate. What did Abbas offer Hamas in return? Most likely, jobs in the government for relatives of Hamas leaders. Two other serious rivals – Marwan Barghouti and Mohammad Dahlan – are both prevented from running for different, impossible-to-overcome, reasons. Dahlan was convicted of “corruption” many years ago, in a trial arranged by Mahmoud Abbas (who is far more corrupt than Dahlan), after which he went into exile in the U.A.E., where he has become an adviser to the Crown Prince, Mohammad bin Zayed. Because of his criminal conviction, Dahlan is by law prevented from running for President. If he were to run, opinion polls tell us he would handily defeat Abbas, with more than 60% of the vote.

Marwan Barghouti has a different sort of handicap. He’s now serving five life terms — for murdering five people — in an Israeli prison. And while he, too, would win more than 60% of the vote if he ran against Abbas, it’s a moot point, since Israel has no intention of letting him out of prison. Should a serious rival appear before the presidential election at the end of July, Mahmoud Abbas will no doubt find a way to derail his candidacy. He wants free elections for the presidency, all right, as long as he’s the only candidate. In the past Abbas hasn’t hesitated to send his goons to physically intimidate political dissidents, including those who complain about the PA’s corruption and mismanagement in the West Bank. Why would he not do the same to rivals now, to ensure his reelection?