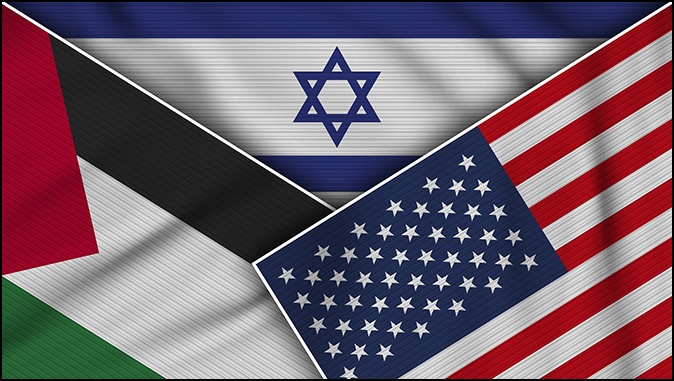 Biden Administration ‘Troubled’ by Israeli Raids in West Bank
Israel is fighting back. Why’s that so hard for Bidenites to understand?
By Hugh Fitzgerald

The Bidenites want Israel to curtail its raids in the West Bank to arrest terrorists. The Israelis have firmly replied that they will continue their operations to capture terrorists in their hideouts and to seize those who are in the planning stage for such attacks, or otherwise aiding and abetting terrorist murderers. After a shooting attack on September 4 in the Jordan Valley left six IDF soldiers wounded, one of them seriously, Defense Minister Benny Gantz vowed to “continue to increase” Israeli activities in the West Bank, while Prime Minister Yair Lapid said security forces will “continue to reach anyone” who threatens the lives of Israeli citizens. If that new policy of preemptive strikes “worries” the Bidenites, who apparently want Israel to stop its raids on terrorists in the West Bank, that’s just too bad. It is Israeli, not American lives, that are at stake.

A report on the Bidenites’ misplaced alarm about those Israeli raids that are meant to keep the terrorists at bay can be found here: “US said to be ‘very troubled’ by surge of violence, rising tensions in West Bank,” Times of Israel, September 3, 2022. This is the subheading of the Times of Israel article:

How maddening it must be for the Israelis to be lectured to, or hectored by, such Bidenites as Barbara Leaf and Hady Amr, on what the Jewish state “must not do” to protect their population, because it causes “tension.” It is Israelis, not Americans, who are being stabbed and shot at, during the sudden rise in terrorist attacks that began last March, and Israel is now determined to apprehend as many Islamic Jihad and Hamas terrorists as it can before they strike. Many of these IDF operations take place in cities, and of course the sight of terrorists being seized in their West Bank lairs has unsettled and infuriated the Palestinian public, but so what? What else can Israel do? Should it return to its previous modus operandi, by going after only those known to have taken part in attacks, or continue with its expanded series of preemptive raids that include as targets those Palestinians who have not yet committed acts of terror but are still in the planning stage? Clearly, the new policy is working, with 1,200 Palestinians having so far been seized in West Bank raids.

The United States has reportedly told Israel it is worried about escalating tensions in the West Bank, as the Israeli military pressed on with a five-month-long operation aimed at preventing Palestinian terrorists from committing attacks.

The Bidenites will not be allowed to interfere with Israel’s new, much more aggressive strategy of preemptive raids for dealing with the terrorist threat. Israel is not America’s client state but is, rather, America’s most important military ally in the Middle East — and perhaps in the world. It will continue to defend the security of its people as it sees fit. The raids will end only when the terror threat, as judged by the IDF and not by people in Washington, is brought sufficiently under control. If the Bidenites want to “decrease tensions,” they ought to leave Israel alone, and instead threaten Mahmoud Abbas with a cutoff of all American aid unless he ends his “Pay-For-Slay” policy that rewards past, and incentivizes future, terrorism. Shutting down that program should decrease the appeal of terrorism to the Palestinians, and lessen the need for these IDF raids.

The Israel Defense Forces launched the operation, dubbed Breakwater, after a series of deadly attacks which killed 19 people between mid-March and the beginning of May. More than 1,200 suspects have been detained since the start of the operation.

That’s a major blow to the terrorist threat. Many Israeli lives have been saved by the new tactics. The IDF no longer waits to respond to attacks, but goes after the terrorists before they can carry out their plans. The IDF has been conducting round-the-clock raids, during the day and at night, especially in the hotbeds of Palestinian terror, Nablus and Jenin.

The Israel Defense Forces launched Operation Breakwater only after a series of deadly attacks which killed 19 people between mid-March and the beginning of May. They decided it was time to go on the offensive, finding and seizing not just known terrorists but also those who were planning terrorist attacks.

According to Channel 13 news [an Israeli channel], Barbara Leaf, Assistant Secretary of State for Near Eastern Affairs, who’s been visiting the region recently, has expressed serious concern to Israeli officials over the situation in the West Bank.

An unnamed Israeli official was quoted by the network as saying the escalation in the West Bank was “very troubling to the Americans.”

“They expressed fear of a security escalation if this dynamic in which Palestinians are killed continues,” the official said.

At least 85 Palestinians have been killed by Israeli forces so far this year, according to a tally from the Palestinian Authority health ministry. It included Palestinians who carried out attacks inside Israel, as well as a veteran journalist (Al Jazeera’s Shireen Abu Akleh, who held US citizenship and whose death was under disputed circumstances) and teens who violently protested in response to Israel’s nightly military operations in their neighborhoods.

Channel 13 said Leaf urged economic and other goodwill moves by Israel, but feared even that may not be enough amid the rising tensions.

Barbara Leaf of the State Department has apparently forgotten the many “goodwill moves” Israel has already made in the last year. First, Israel has greatly increased the number of Palestinians in the West Bank and Gaza who are now allowed to work in Israel: about 200,000 Palestinians now cross each day into Israel or Jewish settlements for work, earning on average more than twice as much as those employed by Palestinian state bodies and businesses. In addition, last August, Israel agreed to lend the Palestinian Authority 500 million shekels. Other “goodwill gestures” include having Israel’s Civil Administration approve more Palestinian building projects in Area C of the West Bank, which is under full IDF military and civilian control.

Israel has promised to find ways to regulate the status of thousands of West Bank Palestinians who lack documentation, as well as ways to streamline digital VAT accounting for all Palestinian businesses that make purchases from Israel. Many of the permit applications for Palestinians will be digitized to streamline the process and make it easier and cheaper. All this has.been done by Israel, but the P.A. has offered no “goodwill gestures” of its own. Instead, though it is supposed to collaborate with Israel on security matters, it has loudly protested Israeli raids to capture terrorists in the West Bank. Why do the Bidenites blame Israel, and not the terrorists and would-be terrorists themselves, for the “increase in tensions” in the West Bank?

The Bidenites should not presume to tell Israel how it must protect its people. No country, least of all one that must continue to fight for its security against cruel and ruthless enemies, should be expected to follow the advice of people of the dismal likes of Joe Biden, Anthony Blinken, Jake Sullivan, Rob Malley, Barbara Leaf, and Hady Amr.

There is a French couplet about those who, when attacked, quite properly respond in kind:

This animal is very wicked,

Just see what happens if you kick it.

That’s all Israel is doing. It is fighting back against those who would destroy it. It is defending its people. It is neutralizing Palestinians who have committed terrorist acts, and rounding up would-be terrorists before they can kill Israelis. What is so hard about that for the Bidenites to understand?