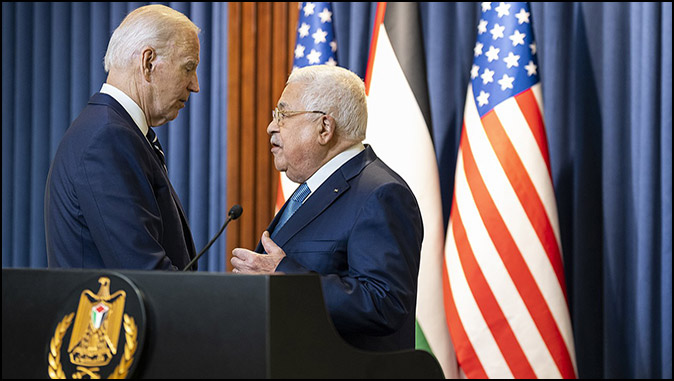 Biden Admin Denies It Sent FBI After Israel
Anyone who believes this just loves being lied to.
By Daniel Greenfield

The FBI has issues, but on its own it would not be ignoring the wave of arsons against pregnancy centers while conducting armed raids on the homes of pro-life protesters engaging in non-violent civil disobedience. This was not the norm before Biden. It’s only happening because of orders from on high. The same folks who bragged of ignoring orders from Trump are saluting and following orders.

Likewise, it’s wildly implausible that the FBI would on its own have decided to get involved in the death of the employee of a foreign terrorist propaganda network in a combat zone abroad.

Anyone who believes this just loves being lied to.

According to U.S. and Israeli officials, the White House and the State Department made it clear to the Israeli government that they weren’t part of the DOJ’s decision-making process regarding the investigation.

They also made it clear that the opening of the investigation was an independent decision by the U.S. Justice Department and wasn’t motivated by a political decision, per the officials….

According to Israeli and U.S. officials, the FBI decision to open an investigation was made before the Nov. 1 elections in Israel, but the Justice Department officially notified the Israeli government three days after the elections.

Why would the FBI move to open an investigation around Israeli elections at all?

As I noted earlier this week, Abu Akleh, the Al Jazeera employee, died while operating in a warzone back in May. So why wait until November? Plenty of foreign correspondents have died with no FBI investigations to show for it. For that matter, no shortage of Americans have been killed in Israel by Islamic terrorists funded by U.S. taxpayers through foreign aid to the PLO’s Palestinian Authority.

It’s entirely a coincidence then that the FBI decided to “independently” open an investigation some 6 months later right around an Israeli election forecast to be won by conservatives.

But we all know about the DOJ’s capacity for reaching independent decisions under Biden. AG Garland has been a rebel on a hot streak who has dissented from his boss on all sorts of decisions.

It’s okay if you can’t name a single one.