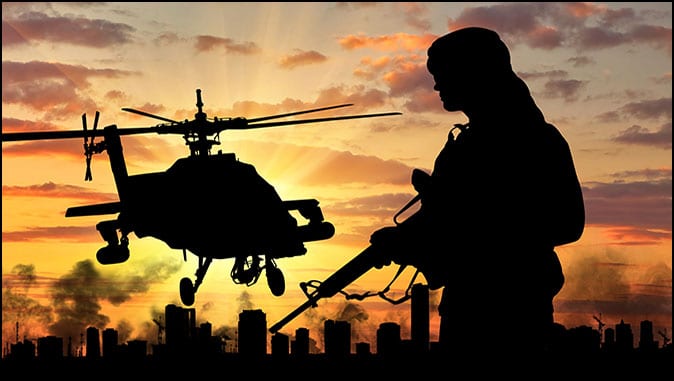 Arabs Warn Biden: The War on Terrorism is not Over
By Khaled Abu Toameh

As the United States prepares to complete its withdrawal from Afghanistan by August 31, 2021, a growing number of Arabs are worried that the American move will not only bring the Taliban back to power there, but also lead to the re-emergence of other Islamist terrorist groups such as Al-Qaeda and Islamic State (ISIS).

The Arabs are saying that the Americans are mistaken if they think that the war on terrorism will end with the withdrawal of the US troops from Afghanistan.

They are warning the US that it will pay a heavy price for allowing Afghanistan to fall into the hands of terrorist groups. They are also saying that they see no difference between the Taliban, Al-Qaeda and ISIS, and how these groups openly cooperate with each other.

Mounir Adib, an Egyptian expert on Islamic movements and international terrorism, pointed out that the Taliban had previously protected Al-Qaeda and even refused to hand over Osama bin Laden to the US while he was residing in Afghanistan, on the pretext that the Americans failed to prove his relationship to the September 11, 2001 attacks.

“The Taliban refused to hand over the leader of Al-Qaeda and provided him with the protection that his group continues to enjoy today,” Adib wrote.

“Intelligence reports confirmed that there is security and military cooperation between the Taliban and Al-Qaeda, whose fighters fought together against the US forces over the past two decades. This means that the Taliban is committed to the core principles that it shares with Al-Qaeda. The danger of Al-Qaeda and the Taliban will continue to threaten the world.”

Adib warned that the US will pay the price for its exit from Afghanistan. “The cost of the withdrawal will be greater and more dangerous for America and the entire world,” he said. “Al-Qaeda and the Taliban are preparing to establish a state whose features will be close to those of ISIS. The threat of ISIS is still there and its cells are still spread everywhere.”

According to the Egyptian expert, the threat of terrorism will grow because of the Americans’ failure to consult with their allies in the Middle East, including Egypt, Saudi Arabia and the United Arab Emirates, regarding the war on terrorism.

In a more recent article, Adib ridiculed the US administration for its readiness to negotiate with Taliban:

“America entered Afghanistan two decades ago in order to eliminate the rule of Taliban… Now, America is negotiating with them. Most of the intelligence reports say that Taliban will extend its political and military control over all Afghan lands. The Americans are leaving Afghanistan despite Taliban’s embrace of Al-Qaeda. The American retreat in front of Taliban and Al-Qaeda confirms that we are facing a new scene through which Al-Qaeda may return to the forefront of jihadist action. The biggest catastrophe is that Afghanistan will become the capital of terrorism again, and now we have the threat of Al-Qaeda making a comeback. The battle of terrorism is witnessing a decline after America’s withdrawal from Afghanistan as these groups feel proud and victorious, which will push them to continue fighting against America and the Arabs and Europeans.”

Adib said that the Taliban succeeded in capturing new areas even before the departure of the American forces from Afghanistan. “This move aims to convey a message to the world that the American withdrawal was nothing but surrender and defeat,” he remarked.

“The consequences of the withdrawal will appear within the first year of the withdrawal of the American forces, and Taliban will control Afghanistan completely within two years of it. America, through its policy, will restore the Taliban regime that it toppled twenty years ago, and is also rebuilding the capabilities of Al-Qaeda. America holds a confused vision in the face of terrorism that may portend dire consequences for the world.”

Atef Al-Saadawi, an Egyptian expert in strategic and international affairs, warned that the war on terrorism is not over. Saadawi said that ISIS continues to pose a serious threat to security and stability of the world.

“The danger of ISIS is still present,” he noted. “The belief that ISIS is finished, and making decisions based on this wrong assumption, are the greatest gift that can be given to this terrorist organization.”

Therefore, Al-Saadawi added, “there is a great responsibility of the international coalition to fight ISIS, and the continuation of this alliance should not be a matter of discussion, and its mission should not be affected by the change of the US administration.”

Saadawi scoffed at President Joe Biden’s statements that the US has achieved its goals in combating the terrorist threat in Afghanistan.

“How can you claim that you have succeeded in combating terrorism without building a nation that incubates moderate ideology and provides a decent living that prevents people from embracing extremists?” he asked.

“While Biden expressed confidence in the ability of the Afghan army to confront the Taliban, he admitted that the Taliban is trying to exploit the American withdrawal and expand its control over the country. The return of the Taliban to control the situation in Afghanistan means a possible and undesirable return of Al-Qaeda and its terrorism and threats to the entire world. Any future government in Afghanistan in which the Taliban participates could contain elements of Al-Qaeda, which will give a huge morale boost to this terrorist organization and help it regroup once again. All indications are that chaos and instability are about to happen in Afghanistan.”

Saudi writer Amal Abdel Aziz Al-Hazani said that there is increased concern that the Taliban and Al-Qaeda are on their way to controlling Afghanistan after the US withdrawal.

Hazani said that the Taliban’s seizure of many areas in Afghanistan shows that the country is about to witness “major transformations.”

“The US forces are about to leave completely by the end of August, leaving behind the Taliban at the top of their ascendancy, and an Afghan government that is resisting the group’s return to power,” Hazani wrote. “Everyone is terrified. The proposed scenarios are multiple, the worst of which is the outbreak of a civil war between the government and the Taliban and ISIS, and the return of Al-Qaeda to threaten the world again.”

Syrian journalist and political analyst Bahaa Al-Awam criticized the US administration for “trying to convince the world that the terrorists it has been fighting for years can be negotiated with and dealt with as political groups worthy of access to power.”

Awam said that the US was mistaken to believe that “the reconciliation with the incubators of terrorism will stop the production of terrorists, and peace will prevail in the Middle East and the world.”

“But the problem is that extremist and terrorist groups and political Islam do not know how to live without rivalry, and they do not like to live in peace and without enemies. It is true that the US military force diminished Al-Qaeda and destroyed the dream of ISIS to have its own state, but it did not eliminate the terrorist ideology, nor did it uproot terrorism from its roots. What makes matters worse is that the American withdrawal from the region will mark a victory in favor of political Islamic organizations, and the victor always attracts attention and becomes the focus of public attention.”

These are the alarm bells that many Arabs are sounding, loud and clear. They seem to urgently hope that the US administration will wake up to the fact that the war on Islamist terrorism is far from over and will not end after the withdrawal from Afghanistan. These Arabs are telling the Biden administration in no uncertain terms: US policies and actions are undermining your credibility among your allies and paving the way for the return of Islamic terrorist groups.

Khaled Abu Toameh is an award-winning journalist based in Jerusalem.