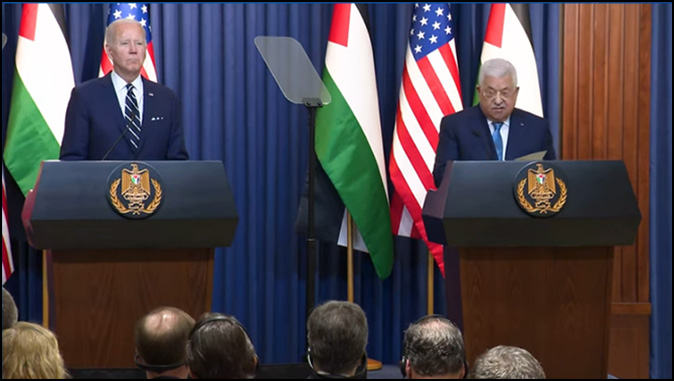 Abbas Called For Israel’s Destruction in Front of Biden
Abbas knew his Arab audience would understand – and that his American one wouldn’t.
By Hugh Fitzgerald

Sometimes it’s hard to decipher the real meaning of Palestinian double-speak. For example, when the Palestinians, and other Arabs, call for a Palestinian state “on the 1967 lines,” what that means is the “pre-1967 lines,” that is, the 1949 armistice lines, which were never agreed upon as borders — the Arabs refused — but merely indicated where the Israeli and Arab armies stood when they stopped firing on a certain day in 1948. The “1967 lines” really means this: an Israel that would be squeezed back within those armistice lines, that is, stripped of the Golan Heights, essential to Israel’s defense against invaders from the north; stripped of east Jerusalem, including the Old City and the Temple Mount, which would again revert to their Judenrein status from 1949 to 1969, when Jewish visitors were prohibited from visiting the holiest site in Judaism; stripped of the Jordan Valley, which helps to guard Israel’s eastern flank along the Jordan River, and indeed, stripped of all of Judea and Samaria, the historic heartland of the Jewish commonwealth, where most of Jewish religious history was made. Israel would then have a nine-mile waist from Qalqilya to the sea, and given the effectiveness, precision, and speed of modern rockets, missiles, and drones, the Jewish state would be virtually indefensible.

Another example of saying something whose meaning others might not grasp was Mahmoud Abbas’s press conference with President Biden in Bethlehem. Jihad Watch ran a preliminary report yesterday, and here’s a full report on Abbas’ speech, and what it meant, a meaning that Biden, I’m afraid, did not comprehend: “Mahmoud Abbas Calls for Israel’s Destruction Right in Front of Joe Biden,” by Maurice Hirsch, Algemeiner, July 20, 2022:

“Standing next to US President Joe Biden at their joint press conference, Palestinian Authority (PA) President Mahmoud Abbas unblinkingly called to end “74 years of … occupation.” In other words, Abbas called for the end of Israel, as Israel was established in 1948 — 74 years ago:

“PA Chairman Mahmoud Abbas: “After 74 years of Nakba [the establishment of Israel], expulsion, and occupation, has the time not come for this occupation to end, for our people that is standing firm to achieve its freedom and independence, and for the wishes of our young men and women … to be realized in a promising future without occupation?”

The clear reference to “74 years of occupation” meant that in his view, the real occupation began not after the Six-Day war in 1967, but on May 14, 1948, when the state of Israel was declared, nineteen years before there were any Israelis in east Jerusalem, or the Golan, or in Judea and Samaria. The Palestinian lands, according to Abbas, have been “occupied “since the beginning of the Jewish state.

Making his intentions clear, Abbas added that the path to destroying Israel starts with creating a Palestinian state:

“In this regard, we say that the key to peace and security in our region begins with recognizing [the] state of Palestine and enabling the Palestinian people to obtain their legitimate rights in accordance with international legitimacy resolutions, and ending all the permanent status issues, including the Palestinian refugees issue.

“And the way to that begins with ending the Israeli occupation of our land, the land of state of Palestine, with East Jerusalem as its capital, on the 1967 borders.”

Mahmoud Abbas made clear at the Bethlehem press conference that the Palestinians will not be satisfied with a return to the status quo ante, that is, to the territorial division that prevailed between 1949 and 1967.

The key word he used was “begins”: peace and security “begins” with recognizing” the Palestinian state, but does not end there. That is only the first step. The next step would be a return of Palestinian refugees to a dimidiated Israel; millions would demographically swamp the Jews, and end the Jewish state.

Abbas’ speech was a momentary display of clarity and honesty.

Abbas made clear that his goal, the goal of the PA, is no different from that of Hamas. The only difference is in tactics and timing. Abbas prefers the Slow Jihad of squeezing Israeli back within the indefensible 1949 armistice lines through political pressure, and only then going in for the kill using military means. Hamas believes in the Fast Jihad, of terrorism and war, to destroy Israel without bothering to first use outside pressure to reduce the Jewish state in size.

On most occasions, when speaking before foreign audiences and leaders, Abbas sticks to the false message that the Palestinians only seek to create a Palestinian state comprised of Gaza, the West Bank, and eastern Jerusalem — living beside Israel.

For example, when speaking recently in front of EU Representative to the PA Sven Kuhn von Bergsdorff and other ambassadors of European countries, Abbas spoke of “the vision of the two-state solution on the 1967 borders,” a “Palestine” on only 22% of “historic Palestine,” as opposed to demanding “45%” of that area, as allocated by the 1947 UN partition plan for the “Arab country.”

Of course, none of those EU. representatives questioned Abbas about the willingness of the Palestinians to permanently accept the existence of a Jewish state. Nor did anyone ask about the 78% of the territory originally assigned to form part of the Palestine Mandate — that is, all of Palestine east of the Jordan River — which was closed to Jewish immigration in 1921, and instead handed over by the British to the Hashemite Emir Abdullah, for him to rule as the Emirate of Transjordan.

Do you think Joe Biden, standing there and listening to Mahmoud Abbas deliver his remarks, had any inkling of what Abbas was saying? He declared that the Nakba that had “lasted 74 years” and had to be reversed, which meant that all of Israel, and not merely the part that Israel won in 1967, had to be removed from the world map, by conquest or, more likely, by flooding the Jewish state with the “returning refugees.” His Arab audience would have understood, but did the Americans?

Abbas then reinforced that view when he said that “In this regard, we say that the key to peace and security in our region begins with recognizing [the] state of Palestine and enabling the Palestinian people to obtain their legitimate rights in accordance with international legitimacy resolutions, and ending all the permanent status issues, including the Palestinian refugees issue.”

“The key to peace and security begins” – that verb is key – with the establishment of a Palestinian state, but does not end there. Abbas might have said “the conflict will come to an end when a Palestinian state is established on the 1967 lines,” but he did not. That state will only “begin” the process leading to the desired outcome – the disappearance of the Jewish state, that will be swamped by the “return of the refugees.”

Did Biden understand what Abbas was saying? Did Blinken or Sullivan? Or did the Bidenites think that Mahmoud Abbas was making a plea for two states to live “side-by-side, in peace,” two states for two peoples because, as Biden says every time he speaks about the “two-state solution,” the “Palestinians and Israelis deserve to enjoy equal measures of freedom, security, prosperity, and democracy. “

That’s not what Abbas has in mind. Abbas spoke honestly, sure that his Arab audience would understand his meaning, and his American one would not. He was right.

IDF Strikes Back at Palestinian Jihad

IDF Strikes Back at Palestinian Jihad Is Israel preparing for a longer campaign in Gaza?…