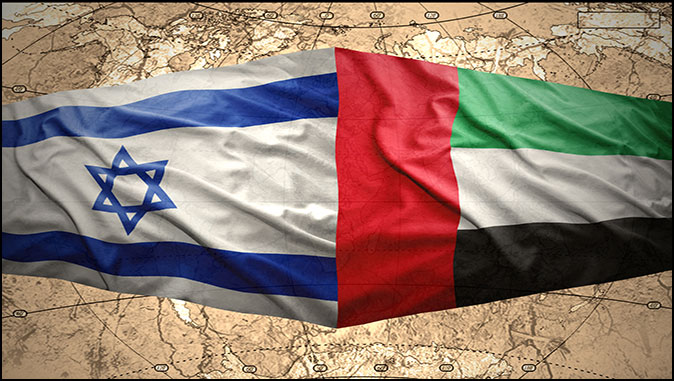 A Visit to Dubai Shows the Enduring Power of President Trump’s Peacemaking
Shillman Fellows open a new front in the fight against terror and BDS on campuses.
By Daniel Greenfield

While the Biden campaign was announcing a slate of radicals sympathetic to the Muslim Brotherhood to stack its foreign policy desk if it ever takes over the government, a very different sort of trip was underway in the middle east that clarified how wrong and dangerous they were.

In an event that would have been inconceivable under Barack Obama, the Shillman Fellows of Reservists on Duty, an organization founded by Israeli military veterans that tours college campuses to speak about the realities of fighting terrorism, were on their way to Dubai.

Dubai, as part of the United Arab Emirates, had formerly banned Israeli travelers, but was now welcoming them in as part of the Abraham Accords overseen by the Trump administration.

Amit Deri, the executive director of Reservists on Duty, who had served in command and combat positions, and is a major in the Israeli reserves, had been searching for a way to push back against the hatred he was seeing from the BDS movement. Now, even as support for BDS hate is growing in America and Europe, Amit and his fellow Reservists on Duty were on their way to one of the countries that had been boycotting the Jewish State for generations.

Reservists on Duty had been set up with the generous support of Dr. Robert Shillman to fight the good fight on college campuses, but now its Shillman Fellows were bound to where few Israelis had gone before in a flight that would have been impossible before President Trump.

“This is all part of a coalition being built by President Trump with our countries, Israel and the Emirates to fight evil,” Amit told me when I spoke with the executive director of Reservists on Duty over the phone after he had just returned from a whirlwind week in the UAE.

Hanging over the trip was the shadow of the election that had just taken place in the United States. And yet even with the threat that the old contingent of Obama and Clinton foreign policy people would be in charge by next year, restarting the flow of money to Iran and political support for the Muslim Brotherhood, neither the Israelis nor the Emiratis were abandoning the coalition.

Like Prime Minister Netanyahu’s trip to Saudi Arabia, it was a signal that the coalition against Iran that President Trump had built through the Abraham Accords was here to stay.

Reservists on Duty was the first Israeli social organization to arrive in Dubai and at first the locals didn’t quite know what to make of them. When Amit Deri had set out to create Reservists on Duty, he had wanted the organization to reflect the full spectrum of Israeli life. Especially as members of the Israeli Defense Forces experience it during their military service.

The Shillman Fellows who arrived in Dubai were not just Jews, but included Arab Christians and Muslim Druze, reflecting a patriotic diversity that encompassed the public service of the nation. And while a trip to Dubai might seem out of bounds for an organization that had been fighting misrepresentation of Israel in western countries, Reservists on Duty was expanding its duty.

Amit and the other Shillman Fellow were there to build connections with Emirati organizations and young people to spread the word about the threat of Iran and the Muslim Brotherhood.

Reflecting the new spirit of change, they were met at the airport by representatives of the Ministry of Foreign Affairs, and soon began reaching out and making connections. Their welcome came even as Qatar, a terrorist state closely tied to Iran and the Muslim Brotherhood, was in the headlines over forced vaginal searches of Australian and British tourists at gunpoint.

While Qatar was living up to its brutal reputation for repression, despite the propaganda broadcast by its state controlled Al Jazeera outlet, the UAE was opening its doors.

On his second day in Dubai, Amit Deri described seeing the Israeli flag being displayed openly and an enthusiastic welcome from locals when they learned that he was from the Jewish State. In most countries in the region, and in many parts of Europe, wearing a yarmulke and other Jewish garments in public can result in harassment and violent assault, but he felt comfortable.

One of the things that the Israelis and Emiratis had in common was thousands of miles away.

“One hundred percent, they openly support Trump,” Amit told me during our conversation. “Trump understands the language of the middle east, we all understand, both Israelis and Emiratis, that we have to thank President Trump because he was the one that pushed together with our leaders to make this coalition possible. It’s Pompeo and Trump that made it happen.”

As the struggle over the election continues, he found both uncertainty and determination.

“Everybody’s waiting to see what comes tomorrow,” he said. “Nobody knows what will be with America.”

A new Emirati acquaintance told him that, “They, the people living in the middle east, will now have to take care of ourselves against Iran.”

In pursuit of that cause, Amit met with activists, academic people, bloggers, and students. His goal was to touch base with Emirati organizations concerned about Iran. But he also has bigger plans that would expand the scope of Reservists on Duty to encompass the region.

The UAE was one of the first powers in the region to recognize the Muslim Brotherhood as a threat after Obama’s disastrous Arab Spring toppled governments and replaced them with terrorists. And Amit mentioned that people in the UAE view Erdogan, the brutal tyrant ruling over Turkey, terrorizing his people and sending invasive migrants into Europe, as a major threat.

Some there dubbed the Turkish tyrant, the “head of the snake”.

Amit envisions opening using his trip as a springboard for a new offensive on college campuses in America to counter the Muslim Brotherhood presence and the pro-Iran propaganda that has infested so many institutions that pretend to be progressive.

“It’s a coalition for peace and going to fight evil,” he said. “We the people can strengthen our ties to fight evil.”

As the region prepares for the possibility of a Washington D.C. administration that supports Iran and the Muslim Brotherhood, the Reservists on Duty visit ended with foreboding and hope.

“They appreciate Trump because he shows strength, they felt someone was protecting the middle east from Iran in the region,” he said.

But whatever happens next year, the people in the region are taking their own stand.

“The great majority of Israelis felt very good about the last four years,” Amit told Front Page Magazine. After the Trump administration recognized the Golan Heights, where he lives, his house is, at least for now in the eyes of Washington D.C. officialdom, officially part of Israel.

“It was like a dream for us, it was amazing for us, thinking about the future of my kids,” he reflected on his trip.

Now he and the Shillman Fellows who accompanied him to Dubai plan to push back against BDS and the radicals who support terrorism on American campuses.

For Reservists on Duty, the battle for the hearts and minds of the free world continues.

Russo-Turkish Relations Trade, proxy wars, and antipathy toward the West. By Joseph Puder Since the…

Pakistani Muslim Cleric: Israel Belongs to the Jews "Not for the Palestinians.” By Hugh Fitzgerald…

Egypt: The European Union Should Stop Lying By Khaled Abu Toameh Originally Published by the…

Turkey and Israel: Premature Optimism for Normalization By Burak Bekdil Originally Published by the Gatestone…