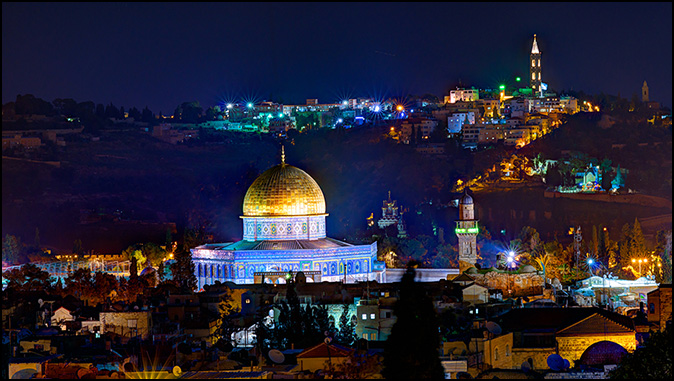 A Frenzy Over the Jewish ‘Plot’ to Seize Al-Aqsa Mosque
Palestinians reach a new level of hysteria.
By Hugh Fitzgerald

One sure way the Palestinian leaders whip up an anti-Israel frenzy among their people is to claim that Israel is intent on changing the status quo on the Temple Mount, by allowing Jews to pray on the Mount, something the Israeli government has always forbidden. Israel is also charged with increasing the number of Jews visiting the Mount and extending the hours and days they are allowed to visit, all as part of a sinister plan to seize Al-Aqsa, destroy it, and build in its place the Third Temple.

The latest example of such hysteria, and the threat of a “religious war…to exterminate everything” is here: “Palestinians Promise ‘Religious War That Will Exterminate Everything’ if Jews Pray on the Temple Mount,” by Nan Jacques Zilberdik, Algemeiner, June 17, 2022:

Israel’s actions in Jerusalem will lead to a “religious war … [that] will reach the US, Europe, and the entire world,” and “will exterminate everything.” These are threats coming from Palestinian Authority (PA) President Mahmoud Abbas’ official spokesmen and advisors.

Yet, all these PA warnings and threats are based on libels and lies.

The libel that Israel is planning the destruction of the Al-Aqsa Mosque in order to build a Jewish temple in its place is one of the most potent and long-standing PA libels.

If Israel had wanted to destroy the Al-Aqsa Mosque, it has had 55 years to have done so. In fact, it would have made the most sense to have destroyed it immediately after the Six-Day War ended, when the Palestinians were traumatized by the catastrophic Arab defeat. But instead of destroying Al-Aqsa, Israel bent over backward to accommodate the Arabs, with Defense Minister Moshe Dayan putting in place a complete prohibition on Jewish prayer on the Temple Mount, and strict limitations on when Jews could visit the Mount – only four hours a day, and on only five days of the week – while Muslims continued to be able to visit at any time of day and week. It is Jews, not Muslims, who have been severely limited by the Israeli state.

As a prelude to this alleged Israeli plan, the PA claims that Israel is also preparing a “division according to areas and times” of the Temple Mount, which the PA defines as “belonging only to Muslims.” The alleged division would allow Jews and Muslims to pray at the site in separate places and at separate times. This would constitute a change in what is perceived to be the so-called “status quo” at the site, which de facto is interpreted to mean Jews are only allowed to enter the Temple Mount, but not to conduct individual or communal prayers there.

But this is a lie. Former Israeli leader Benjamin Netanyahu has stated numerous times that the Israeli government has no intention of ‎changing the status quo.

In July 2021, Israeli Prime Minister Naftali Bennett confirmed that “there is no change in the status quo.”

There is no plan, as the Arabs claim, to divide the visiting hours for prayer between Jews and Muslims. No Israeli government has changed those hours when Jews may visit. To wit: April through September: 8:30 – 11:30 am and 1:30 – 2:30 pm, October through March: 7:30 – 10:30 am and 12:30 – 1:30 pm. Furthermore, there are no “hours for prayer” by Jews; such prayer has been forbidden ever since Israel took possession of the Old City in the Six-Day War.

Regardless, the PA presents “the division according to times” to Palestinians as an actual Israeli plan, and an imminent danger to the Al-Aqsa Mosque. As documented by Palestinian Media Watch, the libel has propelled many a terror attack, and has been justified by Palestinians as the “defense of Al-Aqsa.”

The “threat to Al-Aqsa,” though non-existent in reality, is invoked whenever the Palestinian leaders want to ratchet up tensions. It’s also the surest way to incite acts of terror by those who have been suitably whipped up to “defend Al-Aqsa.”

Recently, the libel was repeated on official PA TV:

Official PA TV host: “Since the June War [i.e., the Six-Day War in 1967] — we are talking about its 55th anniversary — there are [Israeli] intentions to destroy the Al-Aqsa Mosque and build the alleged Temple, and [it is] not just a division according to times and areas that will befall the Al-Aqsa Mosque.”

Recently, one of Mahmoud Abbas’ advisors threatened that continued visits by Jews at the Temple Mount combined with a division of prayer times for Jews and Muslims will lead to something similar to World War III.

“PA Presidential Office Advisor on Jerusalem Affairs, Ahmed Al-Ruweidi, said that this would be “tantamount to an attack on a billion Muslims in the world,” and would lead to a “religious war” that would “reach the entire world”:

“He emphasized that if the invasions and attacks [i.e., visits by Jews] against the Al-Aqsa Mosque continue, and if Israel attempts to impose a division [between Jews and Muslims] according to [prayer] times, this will be tantamount to an attack on a billion Muslims in the world — which means the buds of a religious war…

Ahmed Al-Ruweidi claims that any change at all in the status quo on the Temple Mount will set off a world war with “a billion Muslims” (a curious undercount, for Muslims tend to exaggerate their numbers), a war that will spread to “the US, Europe, and the entire world.” This worldwide conflagration, we are being told, can be set off by “any change at all” – a handful of Jews being allowed to pray silently might be enough to whip up one billion Muslims to go to war against all Infidels.

Another top PA official, Nabil Abu Rudeina, who is PA Deputy Prime Minister, Minister of Information, and official Spokesman of Abbas’ Presidential Office, likewise has threatened that Jews’ visits to the Temple Mount will lead to “religious war that will exterminate everything.”

Again, a worldwide cataclysm is threatened over a handful of Jews quietly visiting the holiest site in Judaism, where they are limited to walking around the perimeter of the Mount.

Nabil Abu Rudeina said that the daily break-ins by extremist Jews into the blessed Al-Aqsa Mosque and its plazas have become an invasion and not a visit. He added that they are denounced and unacceptable.

There are no “daily break-ins” by Jews into the Mosque; Jewish visitors stay well away from the mosque. The Al-Aqsa Mosque is here being deliberately conflated with the 35-acre Al-Aqsa compound, that covers all of the Temple Mount, where Jews are permitted to walk. The only time the Israeli police have entered the Mosque itself is when they have been in hot pursuit of Muslims who had been hurling rocks and explosives from the Temple Mount onto Jewish worshippers at the Western Wall far below, or when Muslims inside the Mosque have been throwing rocks and explosives at Jewish visitors to the Temple Mount.

Abu Rudeina emphasized that the legal and historical status quo at the Al-Aqsa Mosque must be preserved, and he warned that continued invasion will turn the conflict into a religious war that will exterminate everything. [WAFA, official PA news agency, June 6, 2022]

The status quo is being preserved; it’s a non-issue. There is no “continued invasion” by Jews, but a handful of quiet visitors who appear for a few hours, five days a week, without prayer shawls or tefillin, and forbidden from uttering a syllable of praIyer. By “continued invasion,” Abu Rudeina is referring to the fact that on Jerusalem Day, 2,600 Jews visited the Temple Mount, a number he regards with horror. But that number of Jewish visitors, significantly larger than on most days, was as nothing compared to the 100,000 Muslims who regularly appear at the Temple Mount to pray, filling the Mosque to capacity, and spilling out onto the esplanade. On some occasions, such as Eid al-Fitr, the Muslim visitors even reach 250,000; Jewish visitors, at their highest numbers, then, amount to little more than 1% of the number of Muslims who appear on the Temple Mount on holidays. What invasion by Jews is that?

Religious PA officials often repeat that the Al-Aqsa Mosque “is for Muslims only,” as did the PA Mufti, the highest religious authority in the PA:

[PA] Mufti of Jerusalem and preacher at the [Al-Aqsa] Mosque Sheikh Muhammad Hussein said from the Saladin [Al-Ayyubi] pulpit in the Southern Mosque: ‘The [Al-Aqsa] Mosque belongs only to the Muslims, and we will not agree to partnership or division. The occupation’s measures will have no legal effect, and the mosque with all its parts in its total territory of 144 dunams … belongs to the Muslims.’”

The Israelis do not agree that the holiest site in Judaism, where the First Temple was destroyed in 586 B.C. and the Second Temple in 70 A.D., “belongs only to the Muslims.” It has been the center of Jewish religious life for nearly 3000 years But they do believe, despite Sheikh Muhammad Hussein’s fears, that the Al-Aqsa Mosque belongs only to the Muslims. Only very rarely do the police – never Jewish visitors — enter the Mosque, to arrest those had either been attacking Jewish visitors to the Western Wall and then fled inside, or from inside the Mosque had been flinging rocks and explosives at Jewish visitors to the Temple Mount itself.

Given such outrageous claims and threats, perhaps the Israeli government should change its policy of accommodation, as set out by Moshe Dayan in 1967, and allow Jewish visitors to mouth prayers silently, with the clear understanding that if such threats of a “war of extermination “ continue, or if Palestinians continue to throw rocks and explosives at Jewish worshippers at the Western Wall and at Jewish visitors on the Temple Mount, the government will change its policy, and allow Jews to say their prayers openly on the Temple Mount. The more the Palestinians threaten “extermination,’ or the more they attack Jewish visitors, the more there must be pushback from the Israelis. Letting Jews say prayers on Temple Mount is something the world can grasp, and sympathize with. People will ask “why shouldn’t Jews be allowed to pray at their holiest site?”

Why shouldn’t they, indeed?