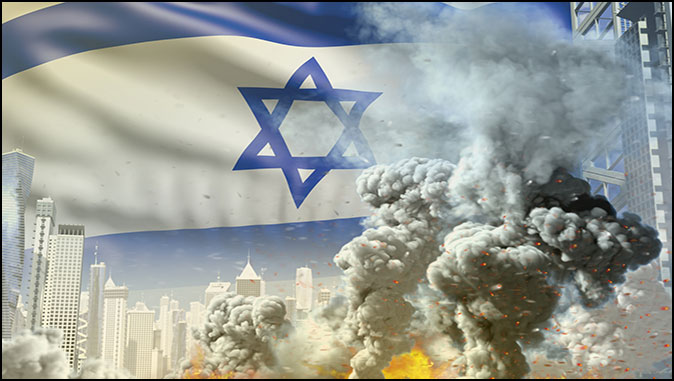 Sunnis and Shi’a have been going at it, intermittently – sometimes less and sometimes more, depending on the place and the time — for at least 1,300 years. The last few decades have been a period of “more,” with a distinct upsurge in Sunni-Shia conflicts, partly a result of a resurgent and aggressive Shi’ite theocracy in Iran, and partly because the rise in fanaticism among Sunni Muslims has led to more attacks, not just on Infidels, but on Shi’a – whom Sunni takfiris declare not to be true Muslims — as well.

In so many parts of the Muslim world, they have been going at one another tooth and nail. In Syria, the Alawite-led army – Alawites are a branch of Shi’a Islam – has managed in the long-drawn-out civil war to defeat the Sunni resistance to Assad’s despotism; in Yemen, the Shi’a Houthis continue to fight the internationally recognized government that is supported by a Sunni-led coalition; in Iraq Shi’a militias attack Sunnis, and Sunnis attack Shi’a in turn; in Saudi Arabia, the Wahhabis (who form a branch of Sunni Islam) deny equal rights to the Shi’a minority living in the Eastern Province; in Bahrain, the ruling Sunni emir holds in check a restive majority-Shi’a population by force; in Kuwait, Sunni extremists have attacked Kuwaiti Shi’a and bombed a Shi’a mosque; in Pakistan, a Sunni terrorist group, Sipah-e-Sahaba, routinely attacks Shi’a Muslims and blows up their mosques; in Afghanistan the Sunni Taliban had been attacking the Shi’a Hazara when the arrival of American troops in 2001 put a stop to the killing; now that the Taliban are the rulers of the country once again, they have gone back to massacring the Shi’a Hazara.

But the Sunni-Shi’a divide can close up when the shared goal of Sunni and Shi’a is the destruction of Israel.

A report on this death-to-Israel terrorist bromance is here: “Hamas and Iran Join Forces to Encircle Israel,” by Yaakov Lappin, Algemeiner, November 5, 2021:

A senior Hamas delegation that visited Iran in October — and met with Supreme Leader Ayatollah Khamenei — is the latest sign of the close partnership between the Sunni Palestinian terror organization and the Shiite Islamic Republic.

Hamas has an important role to play in Iran’s scheme to surround Israel with Islamist, heavily armed forces, said Col. (res.) David Hacham, a former Arab-affairs adviser to seven Israeli defense ministers. However, Hacham said that there isn’t a clear consensus within Hamas over just how far it should align with Tehran.

“There is no doubt that in recent years, there has been an improvement in Hamas-Iran ties,” Hacham said. In 2011, a rift developed over the Syrian civil war, with Hamas backing Sunni Muslim Brotherhood-affiliated rebels against Iran’s ally, the Assad regime.

The main source of conflict between Shi’a Iran and Sunni Hamas has been the Syrian civil war. Iran has been determined to support its fellow Shi’a, the Alawites who now control Syria, while the Sunnis of Hamas have supported their fellow Sunnis who have been trying to overthrow the Alawite despot Bashar Assad.

Following that split, the former head of Hamas’ political bureau, Khaled Mashaal, was expelled from Damascus. He moved to Qatar, where he re-established an overseas Hamas headquarters.

The years 2011-2017 were, because of Hamas and Iran taking opposite sides in the Syrian civil war, the lowest point of their relations. But there’s been an improvement since 2017, when new attempts were made to bridge the gap between the two sides, and Iran renewed its financial aid to Hamas. “Since 2017, the money [from Iran to Hamas] has been flowing in without stop, and the sum is estimated to be many tens of millions of dollars per year,” Hacham added.

The reconciliation was enabled partly because Hamas’ current head of the political bureau, Ismael Haniyeh, who is based in Qatar, and the head of Hamas in Gaza, Yahya Sinwar — whose roots lie in Hamas’ military wing — have a positive view of Iran.

“The military wing is more aware of the military and economic significance of Iran’s assistance to Hamas,” he said. The political wing, meanwhile, has taken a more cautious view of Iran, and is more concerned about how the alliance could affect Hamas’ Sunni Arab credentials.

It appears as if the military wing has won the argument.

The military wing of Hamas largely ignores its theological differences with Iran; it views everything through the prism of its war against the Jewish state, and sees Iran not so much as a “Shi’a” state as it is the single greatest military threat to Israel.

“The recent years have seen many Hamas delegations visiting Iran,” Hacham said. Haniyeh was a prominent guest at the funeral of the late Quds Force Commander Qassem Soleimani in January 2020. There, he dubbed Soleimani “the martyr of Jerusalem,” and said he “provided [sic] to Palestine.”

Qassem Soleimani, the IRGC Commander, did not hesitate to provide military assistance to the Sunni fighters of Hamas. Once the decision had been made in Teheran to ignore the sectarian differences, there were a steady stream of Hamas delegations that arrived to tighten the alliance, to ask for more military assistance, and to declare their undying support for the Islamic Republic.

Within Gaza, meanwhile, Hamas is using Iranian technical know-how to enhance its rocket arsenal’s range. Hamas routinely fires rockets into the Mediterranean Sea to test their ranges and performance.

“Iran has taught Hamas how to build its own domestic rocket manufacturing industry,” Hacham said. “In the past, Iranian weapons were smuggled from the Sinai Peninsula into Gaza; though the Egyptian campaign to destroy smuggling tunnels appears to have largely stopped this activity, it is fair to assume that a small number of tunnels remain.”

Hamas can no longer smuggle Iranian and other weapons into Gaza through the tunnels it built from the Strip into the Sinai; Egypt has destroyed the network. But Iran has been able to share its knowhow in rocketry with Hamas operatives, allowing them to build their own rockets in Gaza itself. It continually provides Hamas with information for upgrading not only rockets, but other weapons in the Hamas armory. By now Hamas is believed to have about 15,000 rockets, the majority of them built in Gaza itself, with technical assistance and training provided by Iran both on-line, and given to Hamas operatives in Iran itself.

Despite the disruption in smuggling, Iran continues to play an invaluable role in Hamas’ military-terrorist build-up. Iran provides training for Hamas operatives, shares offensive and defensive operational plans and battle doctrines, and passes along scientific and engineering information needed for producing ever-improving rockets, explosives, and other weapons in Gaza.

“This is all continuing at full speed,” said Hacham.

The delegation was welcomed in Iran by Hamas’ representative to the Islamic Republic, Khaled Al-Kadumi.

After the visit, Iran’s Supreme Leader, Ayatollah Khamenei, released a statement calling for “the unity of Muslims” as a precondition for solving “the Palestinian problem in the best manner.”

Iran has an interest in relations with Hamas, because it wants to surround Israel from all sides,” said Hacham. “By establishing strongholds in Gaza, Lebanon, and Syria, it is surrounding Israel, effectively putting it under a blockade. This motivates Iran to continue investing in its relations with Hamas, in addition to propping up their direct puppet, Palestinian Islamic Jihad [Gaza’s second largest armed faction].”

It’s not exactly true that Iran has Israel “surrounded.” Last I looked, to Israel’s south, the Sinai was in the capable hands of the Egyptian army, which has been Israel’s ally, as together they have collaborated in fighting both the regrouped remnants of Al Qaeda and the Islamic State, and the Muslim Brotherhood, of which Hamas is the Gazan version. All along Israel’s eastern border is Jordan, which, If not exactly a friend, does honor its peace treaty with Israel, and has no intention of ever again being dragged into a war with Israel, given how much territory it lost when it was inveigled to do so by Gamal Abdel Nasser in the Six-Day War. Finally, save for where it meets Gaza, Israel’s western border is the Mediterranean.

United by their war against Israel, Iran viewed May’s armed conflict between Palestinian terror factions in Gaza and Israel as a ‘victory‘ for its cause, said Hacham.

The Iranians, like the Palestinians, have an impressive capacity for self-delusion. The May conflict was not a victory, but a crushing defeat for Hamas, with more than 225 of its operatives killed, including 25 senior commanders, the destruction of about 3,700 rockets intercepted by Iron Dome missiles – with another 680 having fallen short and landed in Gaza itself — as well as hundreds of rocket launchers, and several command-and-control centers destroyed.

“After Hamas’ violent coup in Gaza in 2007, Iran expanded its support, based on the vision of turning Gaza into an escalation front against Israel. “Assistance grew from tens of millions of dollars per year in 2007 to $200 million per year a few years later, according to reliable assessments,” said Hacham….

Hamas activities in other parts of the Middle East, such as Lebanon, also receive Iranian support, he added. “The financial and military assistance isn’t slowing down. Iran has a need to exert its influence over all radical Islamist forces in the region.”…

Iran may be eager to support Hamas operatives now in Lebanon, but it appears that Tehran has failed to take into account Hezbollah’s reaction. Hamas is increasing its activities in Lebanon in order to threaten Israel from two fronts simultaneously, but it is stepping on the toes of Hezbollah and angering the Lebanese terror army, a new report in October 2021 by the ALMA Research Center – an Israeli group dedicated to security studies involving threats to Israel’s north — has found. Hamas’ secret build-up in Lebanon has grown to hundreds of operatives working for Hamas’s “Construction Bureau,” which builds and develops military capabilities on Israel’s northern border. This force “has the potential of creating a severely difficult challenge for Hezbollah,” the report said. Hezbollah doesn’t want its rival Hamas to gain strength, at its expense, in Lebanon. It may be that Hezbollah will put a lid on Hamas’ activities in Lebanon, even If this causes some friction with Iran.

Iran’s commitments in the region are beginning to add up to a big financial and even military drain on Iran. First, it is supporting Hamas and Palestinian Islamic Jihad in Gaza with a reported subsidy of $200 million a year. It is supporting Hezbollah in Lebanon with about $800 million in annual aid. It continues to supply Syria with military and financial aid; as of 2020, Iran had supplied Syria with $30 billion, as well as unknown amounts of weaponry to use in its civil war. Iran has supplied Hezbollah not just with money, but with a huge armory of rockets and missiles – the terror group is believed to now have a total of 150,000 rockets and missiles, some of them precision-guided, ready to be launched at Israel. In addition, Iran continues to provide weapons and money to the Houthis in Yemen, and to pro-Iranian militias in Iraq, including the Kata’ib Hezbollah.

All of this is happening as Iran faces an ongoing, deep economic crisis, which has not deterred its leadership from investing significant treasure in its regional long-range influence program. That fact alone is testament to the depth of the regime’s dedication to its hegemonic objectives in other Muslim lands – Yemen, Iraq, Syria, and Lebanon — and above all, is testimony to its determination to spend whatever it takes to create a network of allies, including Hamas, that will “surround” the Jewish state, irrespective of the economic woes that this undertaking causes Iranians at home.