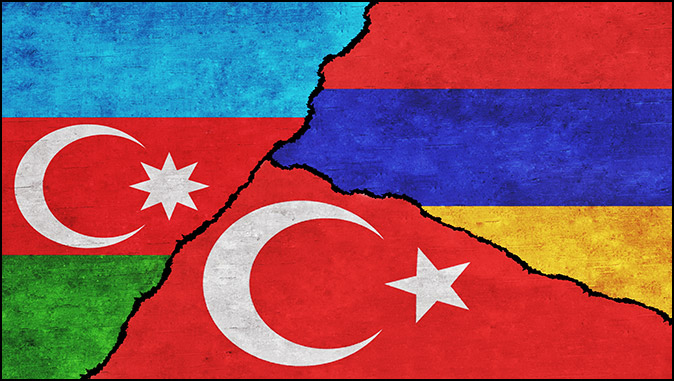 Why Armenia Will Never Know Peace from Surrounding Islam
The only “grievance” Turkey and Azerbaijan have.
By Raymond Ibrahim

In late 2020, war broke out between Armenia and Azerbaijan. Two months later, peace was achieved on condition that the Christian nation cede its ancestral lands in Artsakh, internationally known as “Nagorno-Karabakh,” to its Muslim neighbor.

The peace bought by such Armenian appeasement has been fickle at best. Two weeks ago, Azerbaijan launched yet another attack on Armenia — one just as if not more savage than in 2020, as seen by one particularly grotesque atrocity.

The fact is, no amount of appeasement short of total capitulation will ever satisfy Armenia’s powerful Muslim neighbors, namely Azerbaijan and its “big brother,” Turkey.

Appropriating Nagorno-Karabakh was only the first step of a larger project. As Azerbaijan’s president, Ilham Aliyev, once openly proclaimed, “Yerevan [the capital of Armenia] is our historical land and we Azerbaijanis must return to these historical lands.” He has also referred to other ancient Armenian territories, including the Zangezur and Lake Sevan regions, as “our historic lands.” Taking over those territories “is our political and strategic goal,” Aliyev maintains, “and we need to work step-by-step to get closer to it.”

To this, Tigran Balayan, spokesman for Armenia’s foreign ministry, said: “The statement about territorial claims of the president of Azerbaijan, a state appearing on the political map of the world only 100 years ago … yet again demonstrates the racist character of the ruling regime in Baku.”

This is a rather restrained and diplomatic way of saying that, not only are these claims absolutely false; they are—as most falsehoods nowadays tend to be—the exact inverse of the truth.

Armenia is one of the oldest nations in the world. Armenians founded Yereyan, their current capital, in 782 BC — exactly 2,700 years before Azerbaijan came into being in 1918. And yet, here is the president of Azerbaijan waging war because “Yerevan is our historical land and we Azerbaijanis must return to these historical lands.”

Armenia was also significantly bigger, encompassing even modern day Azerbaijan within its borders, over two thousand years ago. Then the Turks and their offshoots (e.g., Azeris) came riding in from the east, slaughtering, enslaving, terrorizing and stealing the lands of Armenians and other Christians of the region in the name of jihad.

Anyone who doubts this summation should consult the Chronicle of Matthew of Edessa (d.1144). According to this nearly thousand year old chronicle, which is near coterminous with the events it describes, it was only in 1019 that “the first appearance of the bloodthirsty beasts…the savage nation of infidels called Turks entered Armenia…and mercilessly slaughtered the Christian faithful with the sword.”

Three decades later the raids were virtually nonstop. In 1049, the founder of the Turkic Seljuk Empire himself, Sultan Tughril Bey (r. 1037–1063), reached the Armenian city of Arzden, west of Lake Van, and “put the whole town to the sword, causing severe slaughter, as many as one hundred and fifty thousand persons.”

Other contemporaries confirm the devastation visited upon Arzden. “Like famished dogs,” writes Aristakes (d.1080) an eye witness, the Turks “hurled themselves on our city, surrounded it and pushed inside, massacring the men and mowing everything down like reapers in the fields, making the city a desert. Without mercy, they incinerated those who had hidden themselves in houses and churches.”

Eleven years later, in 1060, the Turk’s laid siege to Sebastia (which, though now a Turkish city, was originally Armenian). Six hundred churches were destroyed, “many and innumerable people were burned [to death],” and countless women and children “were led into captivity.”

Between 1064 and 1065, Tughril’s successor, Sultan Muhammad bin Dawud Chaghri—known to posterity as Alp Arslan, one of Turkey’s unsavory but national heroes—laid siege to Ani, then the capital of Armenia. The thunderous bombardment of Muhammad’s siege engines caused the entire city to quake, and Matthew describes countless terror-stricken families huddled together and weeping. Once inside, the Muslims “began to mercilessly slaughter the inhabitants of the entire city…and piling up their bodies one on top of the other. Innumerable and countless boys with bright faces and pretty girls were carried off together with their mothers.”

Not only do several Christian sources document the sack of Armenia’s capital — one contemporary succinctly notes that Muhammad “rendered Ani a desert by massacres and fire” — but so do Muslim sources, often in apocalyptic terms: “I wanted to enter the city and see it with my own eyes,” one Arab explained. “I tried to find a street without having to walk over the corpses. But that was impossible.”

But what was the reason the Turks invaded and so ruthlessly attacked Armenia? What “grievance” did they have? Simple: Armenia was Christian and the Turks were Muslim—and Islam makes all non-Muslims enemies to be put to the sword, until and unless they submit to Islam.

Incidentally, Islam’s animus for Christianity was on display then no less than now. Thus, during the aforementioned sack of Ani, a Muslim fighter climbed atop the city’s main cathedral “and pulled down the very heavy cross which was on the dome, throwing it to the ground,” wrote Matthew. Made of pure silver and the “size of a man” — and now symbolic of Islam’s might over Christianity — the broken crucifix was sent as a trophy to adorn a mosque in, ironically enough, modern-day Azerbaijan. Fast forward nearly a millennium to Azerbaijan’s war on Armenia in 2020, a Muslim fighter was videotaped triumphantly shouting “Allahu Akbar!” while standing atop an Armenian church chapel where the cross had been broken off.

Such is an idea of what Muslim Turks did to Christian Armenians — not during the Armenian Genocide of a century ago, when some 1.5 million Armenians were massacred and even more displaced — but one thousand years ago, when the Islamic conquest of Armenia first began.

This unrelenting history of hate makes one thing perfectly clear: all modern day pretexts and “territorial disputes” aside, true and permanent peace between Armenia and its Muslim neighbors will only be achieved when the Christian nation has either been conquered or ceded itself into nonexistence.

Nor would it be the first to do so. It is worth recalling that the heart of what is today called “the Muslim world” — the Middle East and North Africa (MENA) — was thoroughly Christian before the sword of Islam invaded. Bit by bit, century after century after the initial Muslim conquests and occupations, it lost its Christian identity, its peoples lost in the morass of Islam, so that few today even remember that Egypt, Iraq, Syria, etc., were among the first and oldest Christian nations.

Armenia — the first nation in the world to adopt Christianity — is a holdout, a thorn in Islam’s side, and, as such, can never know lasting peace from the Muslims surrounding it.

Note: Quotes from Matthew of Edessa were excerpted from Ibrahim’s book, Sword and Scimitar: Fourteen Centuries of War between Islam and the West.