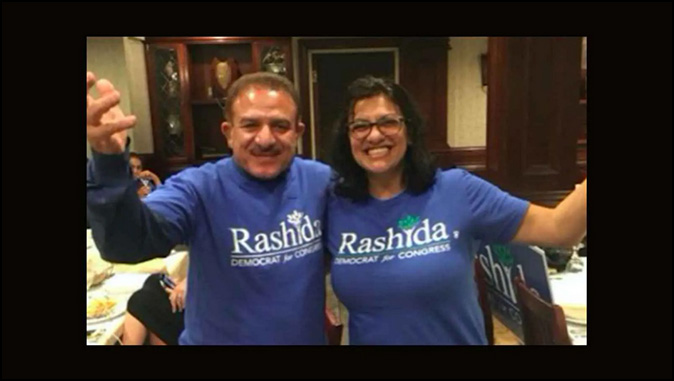 Maher Abdel Qader of the Palestinian American Congress is the Leonard Zelig of the modern Democrat Party; he seems to know everyone, has appeared in photos with most of them, and is connected to everything. He has hosted numerous fundraisers for New York City Mayor Eric Adams; he was part of a committee putting together a fundraiser for Jesse Jackson’s son Jonathan Jackson, who is running for the House in Illinois; and he is close to Reps. Rashida Tlaib (D-Ramallah) and Cori Bush (D-Race Hate), as well as a prominent former congressman, Minnesota Attorney General Keith Ellison. Abdel Qader is also a virulent anti-Semite, which should surprise no one, given the bent of today’s Democrat Party.

It is odd, however, that Adams, who has courted New York’s Jewish community and appointed two Orthodox Jews to his administration, would have close ties to Abdel Qader. Early in 2021, Abdel Qader was one of only six community leaders to speak with Adams on a Zoom call and talk over the then-candidate’s “campaign vision [and] issues,” as well as to “engage in his campaign.” Abdel Qader noted in an Instagram post that has apparently been removed that Adams was “on board with our community and will stand to support us.” Then in September 2021, Abdel Qader posted on Instagram in another post that was later removed or concealed: “Arab and Muslim community leaders met at Marriott hotel – LaGuardia and held a Fundraising for Eric Adams the democratic nominee for New York City mayor. Event was organized by the Muslim Agenda 2021 Coalition.”

Thus it is clear that Adams was publicly friendly with Abdel Qader years after Abdel Qader posted an article on Facebook in 2016 that charged Jews with being “satanic” and claimed that they “practice subversion and treason.” In 2017, Abdel Qader posted a list of the Jewish members of Congress, headed “U.S. Senators and Congressmen with Duel [sic] Citizenship with Israel,” strongly implying that those listed have dual loyalty to Israel and the U.S., as Rep. Ilhan Omar (D-Mogadishu) alleged back in 2019. In November 2019, he shared a video that repeated the claim that Jews are “satanic” and added the paranoid anti-Semitic trope that they control the media, while minimizing the Holocaust.

Was Adams’ campaign so careless that it didn’t pick up this material about Abdel Qader? Or was Adams’ election such a sure thing, since New York is essentially a one-party state with a moribund Republican Party, that the campaign figured that Abdel Qader’s anti-Semitism simply didn’t matter? The worst possibility is that Adams’ campaign calculated that Abdel Qader’s anti-Semitism would resonate with the Democrats’ hateful, far-Left, pro-BDS base, and counterbalance the street cred the candidate lost for being a former police officer?

Whatever the case may be with Adams, other Democrats haven’t hesitated to associate themselves with Abdel Qader, either. In May, Abdel Qader posted on Instagram: “May 18, 2022, Fundraiser for Keith Ellison the 30th attorney general of the State of Minnesota in Manhattan- New York. Also attended by Michael J. Garner, Chief Diversity Officer, MTA Department of Diversity and Civil Rights.” Of course it was.

Of Jonathan Jackson, Abdel Qader wrote: “Jonathan Jackson son of Jesse Jackson/ Chicago is running for congress and needs our support. He is a staunch supporter of Palestine, Palestinians and our Arab American community.”

As for Bush, Fox News reported that “in early November, Abdel Qader posted a Bush fundraising flier for a reception hosted by the St. Louis Palestine Solidarity Committee and the Muslim Community of St. Louis, which solicited donations between $100 and $2,500 for Bush’s campaign, according to the flier. It appears he donated $250 to her campaign for the fundraiser.” Generous guy.

Abdel Qader appears to be closest, however to Tlaib, who has, according to Fox, “participated in several events with Abdel Qader over the years, with the most recent fundraiser posted to his Instagram account on September 25, 2021. One day after the fundraiser, Abdel Qader posted a picture of himself alongside Tlaib on a Manhattan, New York, rooftop.” In contrast to his parsimoniousness with Bush, “Abdel Qader has not only been a key fundraiser for Tlaib, donating $6,500 to her campaign since 2018, but he was also the chairman of her finance committee during her successful 2018 Congressional campaign. Tlaib introduced Abdel Qader by the title at a campaign event. And in 2018, Tlaib presented Abdel Qader with a medal as a sign of gratitude for his help with her inaugural campaign.”

When Outnumbered Christian Defenders Destroyed a Muslim Horde Remembering the Battle of Jaffa. By Raymond…