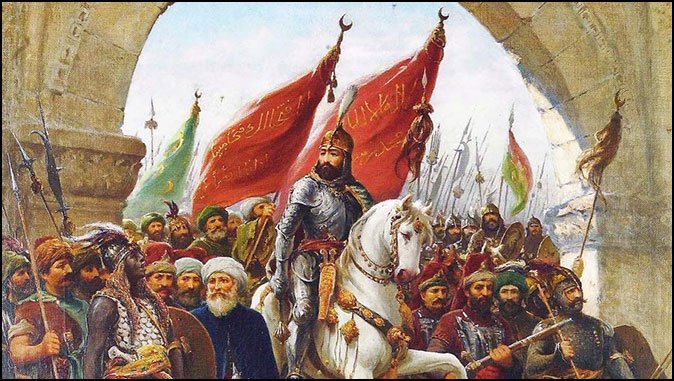 Turkey Praises — and Seeks to Emulate — a Mass-Murdering, Pedophilic, Slave-Trader?
What a people’s “hero” says about them.
By Raymond Ibrahim

Turning churches into mosques is very much on Turkish President Recep Tayyip Erdoğan’s mind these days. Last Friday, June 4, he “spoke of the Turkish legacy of conquest and the conversion of the Hagia Sophia [into a mosque] during a mosque opening in the city of Zonguldak on Friday.” In his own words, “the re-opening of the Hagia Sophia as a mosque is important, as it is a legacy of conquest.”

Thus, while the West falls all over itself to disavow any “conquest” its ancestors may have engaged in—for example, the “conquest of the Americas” at the hands of the “genocidal” Columbus—here is the president of Turkey praising the violent conquests committed by his Muslim ancestors. The significance of this dichotomy, and what it portends for the future, is in need of acknowledgement.

As a case study, take Erdoğan’s stance towards Turkey’s greatest jihadis of history—men whose atrocious deeds would shame ISIS. Last summer, while celebrating his decree to transform the Hagia Sophia—which for a millennium had functioned as Eastern Christendom’s greatest basilica—into a mosque, Erdoğan repeatedly saluted Sultan Muhammad al-Fatah (“the Conqueror,” 1432-1481) for violently transforming Christian Constantinople into Islamic Istanbul.

And yet consider: Sultan Muhammad’s sole justification for conquering Constantinople was that Islam demands the subjugation of “infidels,” in this case, Christians. He had no other “grievance” than that. In fact, when he first became sultan, he “swore by the god of their false prophet, by the prophet whose name he bore,” a bitter Christian contemporary retrospectively wrote, that “he was their [the Christians’] friend, and would remain for the whole of his life a friend and ally of Constantinople.” Although they believed him, Muhammad was taking advantage of “the basest arts of dissimulation and deceit,” wrote Edward Gibbon. “Peace was on his lips while war was in his heart.”

During his siege of Constantinople, he regularly exhorted his Muslim army with jihadi ideology, including by unleashing throngs of preachers crying,

Children of Muhammad, be of good heart, for tomorrow we shall have so many Christians in our hands that we will sell them, two slaves for a ducat, and will have such riches that we will all be of gold, and from the beards of the Greeks we will make leads for our dogs, and their families will be our slaves. So be of good heart and be ready to die cheerfully for the love of our [past and present] Muhammad.

“Recall the promises of our Prophet concerning fallen warriors in the Koran,” the sultan himself exhorted: “the man who dies in combat shall be transported bodily to paradise and shall dine with Muhammad in the presence of women, handsome boys, and virgins.”

The mention of “handsome boys” was not just an accurate reference to the Koran’s promise (e.g., 52:24, 56:17, and 76:19); Muhammad was a notorious pedophile. His enslavement and rape of Jacob Notaras—a handsome 14-year-old nobleman’s son in Constantinople, whom Muhammad forced into becoming his personal catamite until he escaped—was only one of the most infamous. The sultan stabbed to death another Christian boy who “preferred death to infamy.”

After his conquest and desecration of the Hagia Sophia, Muhammad had the “wretched citizens of Constantinople” dragged before his men during evening festivities and “ordered many of them to be hacked to pieces, for the sake of entertainment.” The rest of the city’s population—as many as 45,000—was hauled off in chains to be sold as slaves.

This is the man whom Turkey and its president honor—including by rededicating one of Christendom’s greatest and oldest churches as a victory mosque to him last year. Nor is Muhammad al-Fatah the only terrorist to be honored; as Erdoğan explained in one of his speeches:

The message could not be clearer: jihadi ideology dominates Turkey, at least its leadership. Invading and conquering neighboring peoples—not due to any grievances but because they are non-Muslim—with all the attending atrocities, rapes, destruction, and mass slavery is apparently the ideal, to resume once the sunset of Western power is complete.

Meanwhile, because Americans are used to seeing statues of their own nation’s heroes toppled—for no other reason than that they were white and/or Christian, and therefore inherently evil—the significance of Erdoğan’s words and praise of Muhammad the Conqueror—who as an Asian Muslim is further immune from Western criticism, as that would be “racist”—will remain lost on them.