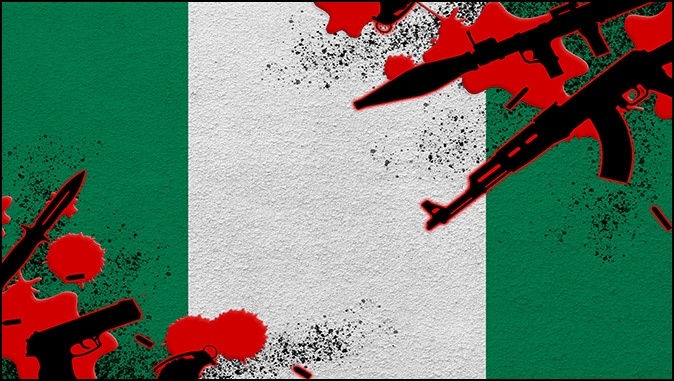 The Unspoken Genocide of Christians in Nigeria
The black lives that don’t matter.
By Raymond Ibrahim

Did you know that, all throughout sub-Saharan Africa — in Nigeria, Mozambique, the Central African Republic, Mali, the Democratic Republic of Congo — Muslims have for many years been terrorizing and slaughtering Christians?

Nor is there any hope on the horizon: problems that cannot be honestly addressed are doomed to persist in perpetuity.

Enter the so-called “mainstream media.” As far as they are concerned, the persecution of Christians in Africa is a byproduct of economic and territorial grievances.

One report, titled, “How poverty and corruption fuel terrorism across Africa,” is emblematic. After citing an incident where “jihadis” connected to the Islamic State slaughtered dozens, it insists that such terrorist attacks, which  “are on the rise across the African continent,” are “a consequence of poverty, domestic grievances new and old…”

This has been the mainstream media’s argument, and they’re sticking to it — no matter all the mountains of contradictory evidence.

Take the little-known genocide of Christians in Nigeria. According to an August 2021 report, since the Islamic insurgency began in earnest in July 2009, more than 60,000 Christians have either been murdered during raids or abducted, never to be seen again. During this same timeframe, approximately 20,000 churches and Christian schools were torched and destroyed by “Allahu Akbar” screaming Muslims.

According to the World Watch List’s latest reporting, 79 percent of all Christians killed for their faith were killed in Nigeria, for a total of 4,650.

Who, exactly, is behind this travesty? Two groups, primarily. First is Boko Haram, Nigeria’s premier terrorist organization, whose full name means “Sunnis for [Islamic] Propagation and Jihad.”  “Boko Haram,” their nickname, means “Western education is a sin” (not “we kill because we’re poor”).  Their stated goal is the establishment of a pure sharia state and the brutal subjugation or slaughter of Nigeria’s Christians.

The other group, which has in recent years terrorized and slaughtered even more Christians than Boko Haram is the Fulani—Muslim herdsmen who regularly raid the villages of and slaughter Christians. They, too, are acting on jihadist teachings and hate for Christians.

Considering that, on average, 13 Christians are slaughtered every day for their faith in Nigeria, it is almost pointless to list any particular incidents. Those interested in following this tragedy can consult my “Muslim Persecution of Christians” series, where I collate the main instances of persecution that surface every month around the world. Needless to say, when it comes to the slaughter of Christians, Nigeria dominates. Here are just some of those that occurred for the month of September 2022:

– 11: Muslims murdered a Christian while abducting a pastor and wounding his wife.

– 18: Muslim Fulani killed three Christians during a raid on a Christian village, “after slaughtering at least 22 others in the same area in the past three weeks.”

– 23: Muslim Fulani raided six predominantly Christian villages in the same region of Benue state. “These attacks by the herdsmen have left dozens of Christians dead and several more with gunshot injuries and machete attack wounds,” an area resident said.

– 17: During an all-night prayer vigil inside a church, Muslim Fulani broke in and abducted dozens of Christians. Less than one week earlier, 60 other Christians were abducted from the same denomination in another region of the country.

– 4: Gunmen kidnapped dozens of Christians from church, including the pastor’s son.

Responding to these and other attacks, a recent statement from the Southern Kaduna Peoples Union said,

The atrocities are, indeed, nonstop. Most recently, according to an Oct. 27 report, along with slaughtering 15 more Christians — mostly women and children, as they slept during the night — Muslim Fulani also, and quite sadistically, cut off the breast of a Christian woman.

Despite all this, the American “mainstream” remains committed to describing the jihad in Nigeria as a byproduct of “inequality” and “poverty,” to quote Bill Clinton, as he once explained what was “fueling all this stuff” (the “stuff” being a reference to the genocide of Christians in Nigeria).

In their quest to blame anything and everything but reality, even climate change has been added to the mainstream arsenal of reasons fueling the jihad on Christians. After Muslim Fulani massacred some 50 Christians as they peacefully worshipped inside their church on Pentecost Sunday (Jun. 5, 2022), the president of Ireland, Michael Higgins, issued a statement precisely making such an absurd claim.

But as one Nigerian nun, Sister Monica Chikwe, once observed, “It’s tough to tell Nigerian Christians this isn’t a religious conflict since what they see are Fulani fighters clad entirely in black, chanting ‘Allahu Akbar!’ and screaming ‘Death to Christians.’” Or as the Christian Association of Nigeria once asked, “How can it be a [secular or economic] clash when one group [Muslims] is persistently attacking, killing, maiming, destroying, and the other group [Christians] is persistently being killed, maimed and their places of worship destroyed?”

Perhaps worst of all has been the Biden administration’s response. In 2020, Trump placed Nigeria on the State Department’s list of Countries of Particular Concern — that is, nations which engage in, or tolerate violations of, religious freedom. Under Biden, however, the State Department removed Nigeria — this nation where one Christian is killed every two hours — from the list.

Needless to say, many observers slammed the State Department for this unexpected move. As Sean Nelson, Legal Counsel for Global Religious Freedom for ADF International, noted:

Outcry over the State Department’s removal of Country of Particular Concern status for Nigeria’s religious freedom violations is entirely warranted. No explanations have been given that could justify this decision. If anything, the situation in Nigeria has grown worse over the last year. Thousands of Christians, as well as Muslims who oppose the goals of terrorist and militia groups, are targeted, killed, and kidnapped, and the government is simply unwilling to stop these atrocities. … Removing Country of Particular Concern status for Nigeria will only embolden the increasingly authoritarian government there.

Incidentally and to his credit, along with placing Nigeria on the list, Trump once forthrightly asked the Nigerian president, Muhammadu Buhari — whom many Nigerian officials insist Obama helped bring to power — “Why are you killing Christians?”

At any rate, such is the current state of affairs: a jihad of genocidal proportions has been declared on the Christian population of Nigeria — and has since spilled over into several other sub-Saharan nations — even as American media and government present Nigeria’s problems in purely economic terms that defy reality.

The inability to accept the straightforward facts; the inability to factor ideological or existential motives, seeing only material motives (money, land, etc.); the almost instinctive conclusion that Muslim violence is proof positive of a legitimate grievance — all of these are so ingrained in the predominant paradigm, from the mainstream media to mainstream politicians, and all of these are poisoning Western civilization from within, and eroding its influence and capacity to act from without.

It also means that, for most American media and politicians, black lives do not matter — at least not when they’re Christian, and being terminated by Muslims.