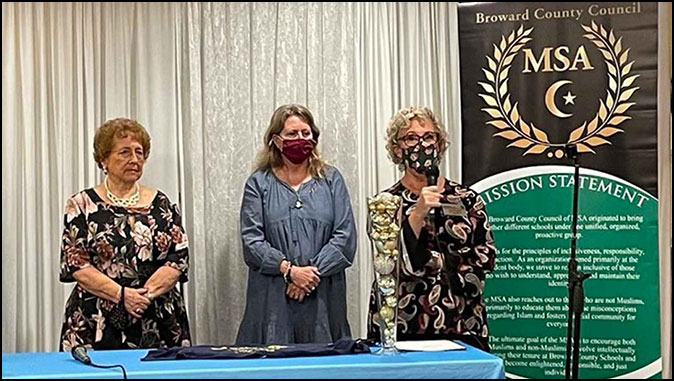 The Muslim Brotherhood’s ‘Useful Idiots’ at the Broward County School Board
Elected officials bow to Islamists who lobby for extra day off based on population lie.
By Joe Kaufman

For years, public school students have gotten days off for both Christian and Jewish holidays. Some Muslim groups have complained of feeling slighted, arguing “diversity.” Last month, the Broward County School Board granted their wishes, by adding to the upcoming school calendar a day off for Eid al-Fitr, which falls at the end of Ramadan. But were the members of the School Board and others purposely misled by the organizations with flagrantly false information about Broward’s Muslim population? And did they consider the extremism and bigotry these groups, themselves, are affiliated with? Had they done so, the outcome might have been very different.

This past October, the School Board discussed the proposed calendar for the 2022-2023 school year. Leaders from the Muslim community came to lobby the officials to choose a calendar that would include a day off during Ramadan. Two of the leaders, South Florida Muslim Federation (SoFlo Muslims) Broward County Representative Yunus Ismail and Emgage Outreach Lead Corey Shearer, during the comments portion of the meeting, made it a point to tell the School Board that at least 75,000 Muslims reside in Broward and that 25,000 of them are students in Broward schools. This data not only appears to be false, but it is also grossly inflated.

According to bestplaces.net, a data gathering website quoted by the nation’s top publications and organizations, Muslims make up 1% of Broward’s 1,958,105 (as of this writing) population, totaling 19,581 people. According to the Association of Religion Data Archives (ARDA), another widely quoted data gathering site, in 2010, Broward Muslims had a population of 18,176. Indeed, using the statistics from these data sites, if one ads up the populations of all three South Florida counties – Broward, Miami-Dade and Palm Beach – one does not reach a total near 75,000.

Additionally, in a February 2008 article from the Fort Lauderdale Sun-Sentinel discussing a then-alleged “Islamic growth spurt” in South Florida, Altaf Ali, then-head of the Florida chapter of the Council on American-Islamic Relations (CAIR), which is a member of the Muslim Federation and a group notorious for inflating Muslim population numbers itself, said Broward’s then-Muslim population was 20,000. It is obvious that the Muslim Federation contradicted its own affiliate group, for how can anyone believe that a population of 20,000 Muslims in 2008, which by the data websites’ standards was a little high to begin with, went up almost four-fold in 2022?

Yet, the Broward County School Board and, as well, the Broward County Commission, which issued a press release calling on the School Board to add the Muslim day off on its calendar, were both fed the false data, including the part about the 25,000 students (and many of whom may not even be attending public schools). In fact, the data was the first piece of evidence (for the said day off) mentioned in the Commission’s press release, taking up the entire second paragraph of the release. According to the release, the data was courtesy of the Muslim Federation.

Given the above information, it appears that the 2022-2023 calendar was changed primarily as a result of bogus statistics – what seem to be egregious and unchallenged lies – provided by the aforementioned groups. Question: Who are these groups and what is their agenda?

The Muslim Federation is an umbrella organization for the vast majority of radical Muslim institutions in South Florida. This includes groups linked to overseas terror, such as CAIR, which has ties to Hamas; Islamic Relief (IR), which has been banned by a number of nations; and the Islamic Circle of North America (ICNA). The Federation also represents extremist mosques. Two of them, the Islamic Center of Weston (ICW) and Masjid Jamaat Al-Mumineen (MJAM), teach their followers from a text, Tafsir Ibn Kathir, which labels Jews and Christians “enemies”; repeatedly calls for the death penalty for gays; and sanctions domestic violence against women.

Emgage, which is also a member of the Federation, is an Islamist group that attempts to disguise its sinister goals as political advocacy. The founder and Chairman of Emgage, Khurrum Wahid, has been an attorney for many of the high-profile terrorists that the US government has prosecuted, including members of al-Qaeda and the Taliban, and reportedly, Wahid himself was placed on a federal terrorist watch list in 2011.

Following the School Board’s December decision to move forward with the calendar change, the Muslim Federation and Muslim Students Association (MSA), which was also part of the lobbying effort and which too has a terror-related history, threw a party in celebration of the decision. Participating in the affair were different members of the School Board, including Rosalind Osgood, Nora Rupert, Ann Murray, and Debra Hixon.

The Muslim Federation, which posted on its website numerous photos of the School Board members standing behind and next to large Federation and MSA banners, stated that the school officials “congratulated the community, calling it a big win and vowed to continue their efforts… safeguarding [the] interests of [the South Florida] Muslim community.”

In reality, the “big win” for the Federation and its ilk was not the adding of the day off for Muslims. The introduction of Eid to the school calendar never was about a day off. The prize, instead, was the winning of the loyalty and unquestioning submission of the School Board members, whom the Islamist groups showcased like hunting trophies in front of the celebratory crowd. If the day off serves any purpose for these organizations, it is most probably to indoctrinate students into their brand of Islam.

The clueless School Board members and county commissioners have been duped and cynically manipulated by false data supplied to them by extremist groups pushing a bigoted and violent agenda. By not independently verifying the statistics given to them by the Muslim Federation and Emgage and by not performing proper background checks on these organizations, the Broward School Board members and commissioners have failed both their students and the public.