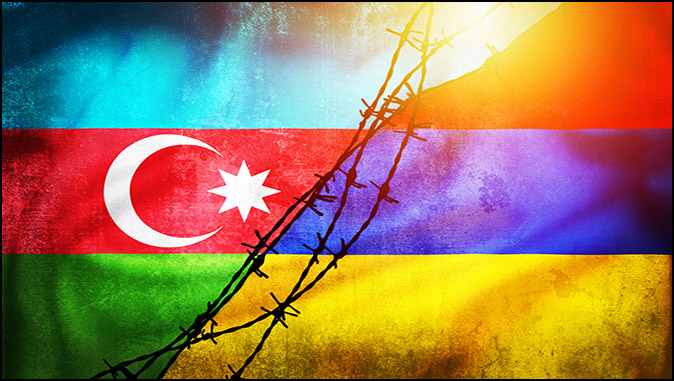 The Jihad on Armenia Erupts Again
And the same West that is ready to sacrifice everything for Ukraine yawns.
By Raymond Ibrahim

Armenians in the Republic of Artsakh woke up on September 13, 2022 to an uncertain future after Azerbaijan attacked them in the dead of night. As Trey Blanton reported on location, Azerbaijani forces launched drones, artillery, and mortars on several Armenian villages. More than 100 Armenian soldiers were killed — several later mutilated beyond recognition — in Azerbaijan’s two-day bombardment.

Modern hostilities between Armenia, an ancient nation, and Azerbaijan, which was created in 1918, began in late 2020, when war erupted over disputed territory now known as “Nagorno-Karabakh.” Although it was Armenian for thousands of years, known as Artsakh, and remains predominantly Armenian, after the dissolution of the USSR, it was allotted to Azerbaijan, causing problems since and culminating in the recent wars. (See “15 Artsakh War Myths Perpetuated By Mainstream Media.”)

On the surface, and as widely reported by media, this is yet another territorial dispute, this time between (Christian) Armenia and (Muslim) Azerbaijan. Beneath the surface, however, lurks that old Muslim-Christian divide, typified by jihadist hate for “infidels.”

Many factors validate this view. For starters, Christian Armenia’s ancient Muslim nemesis, Turkey, had funded Sharia-enforcing “jihadist groups” that had operated earlier in Syria and Libya — including one that had kept naked, sex-slave women in prison — to terrorize and slaughter the Armenians at the start of the late 2020 war.

One of these captured mercenaries later confessed that he was “promised a monthly $2,000 payment for fighting against ‘kafirs’ in Artsakh, and an extra 100 dollar[s] for each beheaded kafir.” (Kafir, often translated as “infidel,” is Arabic for any non-Muslim who fails to submit to Islam, which makes them enemies by default.)

Among other ISIS-like behavior committed by the Islamic coalition of mercenaries, Turks, and Azerbaijanis that waged war on Armenia, they “tortured beyond recognition” an intellectually disabled Armenian woman by sadistically hacking off her ears, hands, and feet, before finally executing her. Similarly, video footage showed camouflaged soldiers overpowering and forcing down an elderly Armenian man, who cries and implores them for mercy, as they casually try to carve at his throat with a knife.

Just last week, Azerbaijani forces created mounds of decapitated and mutilated Armenian soldiers. One of them, a female, was raped, had both arms and legs cut off, one eye gouged out, and her own fingers mockingly stuffed inside her mouth and private parts.

None of this is surprising; as usual, once the jihad on Armenia became official, the Christian foe was hated with an unbridled ferocity. Even Nurlan Ibrahimov, the head, not of politics, but of the press service of Qarabag football club of Azerbaijan, had to chime in: “We [Azerbaijanis] must kill all Armenians — children, women, the elderly. [We] need to kill [them] without [making a] distinction. No regrets, no compassion.”

The President of Azerbaijan and the country’s authorities have been implementing a policy of hatred, enmity, ethnic cleansing and genocide against Armenia, citizens of Armenia and the Armenian people for years. The Turkish authorities have done the same or have openly encouraged the same policy.

By way of example, he said that Azerbaijan’s President Aliyev once publicly boasted that “the younger generation has grown up with hatred toward the enemy,” meaning Armenians.

Another factor evincing the Islamic pedigree of the conflict is that Turkey, though uninvolved with the dispute, quickly joined its Azerbaijani co-religionists and arguably even spearheaded the initial stages of the war against Armenia. As Nikol Pashinyan, Armenia’s prime minister, had rhetorically asked at the start of the war: “Why has Turkey returned to the South Caucasus 100 years [after the dissolution of the Ottoman Empire]?” His answer: “To continue the Armenian Genocide.”

Needless to say, jihadist hate, which is always a precursor to genocide, continues to be evident everywhere in modern-day Turkey. One need only listen to the religiously-laden rant of one Turkish man about how all Armenians are “dogs” and that any found in Turkey should be slaughtered to get an idea:

Why do we let them live?…We will slaughter them when the time comes. This is Turkish soil. How are we Ottoman grandchildren?…The people of Turkey who have honor, dignity, and Allah must cut the heads of the Armenians in Turkey. It is dishonorable for anyone to meet and not kill an Armenian…If we are human, let us do this — let us do it for Allah. Everyone listening, if you love Allah, please spread this video of me to everyone.

Similarly, in response to a question being asked to random passersby on the streets of Turkey — “If you could get away with one thing, what would you do?” — a woman said on video: “What would I do? Behead 20 Armenians.” She then looked directly at the camera, and smiled while nodding her head.

That the conflict is underscored by Islam’s traditional hate for all things Christian is perhaps best seen in the fact that the hallmark sign that “Islam was here” — the systematic desecration of Christian churches — also befell Armenian churches that came under Azerbaijani control, despite promises from the authorities to protect them.

In one instance, and as has happened countless times throughout the ages — an Azerbaijani stood atop an Armenian church, after its cross had been broken off, triumphantly crying “Allahu Akbar!”

Azerbaijani forces also shelled and destroyed Holy Savior, an iconic Armenian cathedral which was “consecrated in 1888 but was damaged during the March 1920 massacre of Armenians of the city by Azerbaijanis and experienced a decades-long decline.” See here, here, and here for similar examples — including the torching of an Armenian church in San Francisco during a spike of anti-Armenian hate crimes.

According to a March 27, 2021 report, over the course of just two weeks, at least three Armenian churches in Artsakh (“Nagorno-Karabakh”) were vandalized or destroyed — even though a ceasefire was declared in November, 2020. Video footage showed Azerbaijani troops entering into one of the churches, laughing, mocking, kicking, and defacing Christian items inside it, including a fresco of the Last Supper. Turkey’s flag appears on the Azeri servicemen’s uniform, further implicating that nation. As they approach, one of the soldiers says, “Let’s now enter their church, where I will perform namaz.” Namaz is a reference to Muslim prayers; when Muslims pray inside non-Muslim temples, those temples immediately become mosques.

Transforming “conquered” churches into victory mosques is, of course, the ultimate display of jihadist supremacy — one participated in by even the president of Azerbaijan. On May 12, 2021, the same day Azerbaijani troops entered Armenian territory, President Aliyev laid the foundation for a new “victory” mosque on ancient Christian territory, in Shushi, where another cathedral was desecrated.

Such are the unspoken religious and ideological underpinnings of what is being presented as a mere “territorial dispute.”

Death for Apostates, Jail for Blasphemers

Death for Apostates, Jail for Blasphemers Recent developments in Libya and Egypt. By Raymond Ibrahim…